In Conversation with: Paul Bracken, Expert on Nuclear ‘Power Politics’

North Korea, which just conducted its third nuclear test, is using its weapons program to deter the United States by holding its allies “hostage,” according to Paul Bracken, who teaches management and political science at Yale.

Bracken is a member of the Council on Foreign Relations, serves on several Department of Defense advisory boards, and is the author, most recently, of “The Second Nuclear Age: Strategy, Danger, and the New Power Politics” (Times Books, 2012). The following is an edited version of an email interview with him. 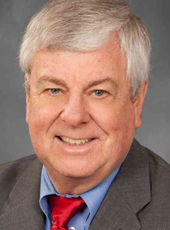 The spread of the atom bomb is becoming “like a networked multinational corporation,” according to Yale professor Paul Bracken. Image credit: Yale University

In your new book, you argue that the cold war paradigm does not apply to the “multi-polar” geopolitical world in which we live now. How so?

The spread of the bomb is becoming like a networked multinational corporation.  Building and coordinating these networks is the new frontier, and it is quite unlike anything seen in the cold war.

Can you explain how North Korea, Iran, and Pakistan are working together on their nuclear weapons programs?

The new concern here is sharing of information among countries. For example, Pakistan knows how to shrink an atomic bomb so it will fit on the tip of a missile. They can share this knowledge with North Korea and Iran. Also, North Korea could sell enriched uranium to Iran greatly accelerating Iran’s nuclear program.  This would also upset Western estimates of where, exactly, Iran stands in its nuclear development effort.

What leverage does North Korea have to stave off sanctions by the United States and its allies?

North Korea’s nuclear war plan is to hold Japan and South Korea hostage so that the United States doesn’t press too hard on sanctions.  This also encourages the U.N., China, and others to contribute humanitarian food aid. I don’t think North Korea has any real military strategy here, rather it’s a political strategy for using the atomic bomb to deter the United States and advance Pyongyang’s need for food and oil donations.

How do you predict China will react to this threat from North Korea?

I would be very careful about thinking China will crack down on North Korea.  I expect that’s the message that will come out of Washington in the next few days — that China is very upset by the nuclear test.  But China has a complex interest here.  Beijing doesn’t want North Korea to collapse.

North Korea isn’t the only power in the East flexing its nuclear muscle, is it?

In all of this recent news what has been overlooked is India’s announcement that it is building a multiple warhead ICBM, a so-called MIRV. Also, China has new submarines in testing.  It’s a dangerous time, with nuclear weapons tightening their grip in many of the world’s critical regions.