In conversation with: Hee Oh, professor of mathematics

Hee Oh joined Yale’s math department this year from Brown. Here she talks about absolute abstraction, the joy of walking — and missing math during her years as a social activist.

You received your doctorate in mathematics from Yale in 1997, then served on the faculties of Princeton, Cal Tech, and Brown, among others. What drew you back to Yale?

The math department at Yale has been well known for its strength in Lie groups, geometry, and dynamics for a long time. It was an honor and in itself a big draw for me to be asked to participate in continuing this tradition. In the end, however, I felt in my Christian faith that God was leading me this way, and I made the final decision accordingly. 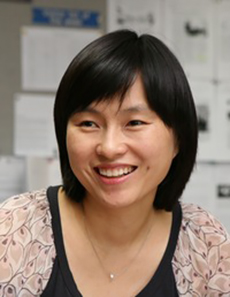 When did you realize that you wanted to be a professional mathematician, and what aspect of mathematical thinking appeals to you most?

It happened during my junior year of college in Korea. By that time I had completely stopped doing mathematics because I was drawn to social science and activism. I thought helping the weak and underprivileged in society was a better use of my finite life in this world.

After a while of being an “activist,” however, I came to realize how much I loved thinking about math problems and how badly I missed it. So I came back to math in earnest and decided to become a mathematician.

I like that a mathematical problem has always an answer. We strive either to prove or disprove, but we know that only one of the possibilities is true. To me, this clarity is a huge attraction, which is only possible because we are dealing with the absolutely abstract world, unlike, for example, in social sciences where the complexity of reality is such that there never seem to exist one clear answer but many different and incomplete answers.

How do you think through mathematical problems?

In the early stage of solving a mathematics problem I usually have very little understanding of what is going on or how the problem will be solved eventually. However, after making many little steps toward the solution, and after being stuck for a while not being able to move forward, there is this dramatic moment when I hit the key insight that opens the last door to the solution.

It is as though I feel my way through the darkness, find a switch to light up the room, and come to appreciate how perfectly organized and beautiful that room really is. I look around and understand the role of each piece of the problem I stumbled over in my wanderings searching for that switch.

Although in the beginning it looks like there is no structure, each mathematical problem has indeed a beautiful structure, not unlike what we appreciate in a great art work.

You are an expert in the dynamics of homogeneous spaces. What does that mean? What is the nature of the problems you study and do they have a worldly application?

A homogeneous space is a space with lots of symmetries, or one can think of it as a space of lots of rules. The long-term behavior of a random object which evolves over time in such a space is very rigid because of these rules. I study such rigidity phenomenon and its applications in number theory and geometry.

One reason that I like my area is it has many interactions with other areas of mathematics. It is very exciting to find a new interaction between seemingly unrelated areas. Broadly speaking, this area also has an application in building efficient networks.

Where do find that you do your best thinking? At home? Outdoors? In transit?

I don’t have one magic place but sometimes I like to think sitting in a cafe. I also love walking. Walking calms down my brain from mundane distractions and often gives me an opportunity to view the problem from a different angle than I was previously fixated on.

In your experience, is there a general habit of mind that all great mathematicians seem to share?

Well, many that I know love art, music and hiking, but that’s pretty much it as far as I can observe. In fact, mathematicians seem to be very different from each other in their modes of thinking.

You are the first tenured woman in Yale’s math department. What advice would you give to young women considering graduate study in math? And would this advice be any different from the advice you’d give to a young man?

I think mathematics is a great profession for women. In a practical (and maybe unfortunate, depending on your perspective) context, being a mathematician has more flexibility about when and where we have to be at a given moment, than most other jobs, as long as we are in a place we can “think.”

Lack of confidence is a big issue for female students. By confidence I don’t mean a false sense of superiority. I have observed female students who are as good as their male counterparts or even better think less highly of themselves and not be as ambitious. If there are more prominent female mathematicians who could be role models, that would certainly help. This is a complex problem, but it seems to me that solving this confidence issue is very important in encouraging more female students in math and science.