In conversation: scientist Ruth Blake on life aboard the E/V Nautilus

Yale geology and geophysics professor Ruth Blake recently completed a tour of duty as lead scientist aboard the exploration vessel Nautilus, during the Windward Passage leg of the ship’s 2014 exploration season.

The Windward Passage is the body of water between Cuba and Haiti, where the Atlantic Ocean flows into and exchanges water with the Caribbean Sea. Blake’s stint as lead scientist lasted Aug. 18–28.

Blake spoke with YaleNews about the scientific mission at the heart of the journey.

What are the duties of the lead scientist?

The lead scientist coordinates the scientific objectives, exploration, and sample requests for all participating scientists. Most of our scientists are land-based (there are 29 for the Windward Passage Leg), as the ship has room for only four scientists, in addition to those staffed by the Ocean Exploration Trust, among its 48 crewmembers. The 2014 exploration season, which you can see from the nautiluslive.org website, started back in June with legs in the Straits of Florida, Dry Tortugas, several in the Gulf of Mexico and the Mesoamerican Reef off of Belize, then Montego Bay to begin the current leg. For the remainder of the season we will head down the Antilles chain to explore seamount and return to Kick’em Jenny (an active undersea volcano near Grenada) to explore and collect volcanic vent fluids.

The lead scientist also serves as one of the watch leaders. The watch leader sits at a central console and basically controls the remotely operated vehicles (ROVs). You tell them where to go, when to stop and sample things such as corals, rock, and sediment cores. We also sample the water column to study dissolved nutrients and isotopes in the water, which is the focus of my own research during this leg.

I am studying the breakdown products of “marine snow” — sinking organic matter in the water column that often appears like an underwater snowstorm — to understand its transport and transformation within the different water masses that manifest in the Windward Passage and Jamaica Channel. Specifically, I am studying dissolved phosphate in the water column. 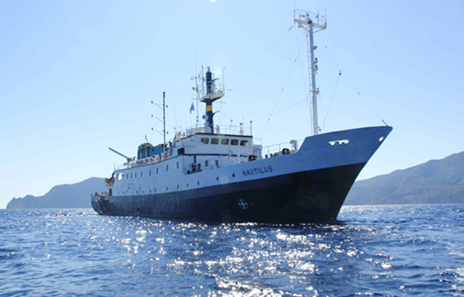 Professor Ruth Blake was on the E/V Nautilus during its Windward Passage leg. (Image credit: Photo via Ocean Exploration Trust)

What appealed to you the most about this way of conducting research?

Aside from jumping at the opportunity to do research at sea, sailing on E/V Nautilus was something I really wanted to do. Nautilus is unlike most other vessels, in that it is an exploration vessel, versus the more common research vessels. It also has telepresence via an onboard satellite system, opening up the world to real-time, live-streamed video of our exploration on the seafloor. There is the ability to communicate with scientists in real-time via a chat room, so the world can explore the oceans right along with us. This is a unique and unprecedented platform and a new way of doing science. It is highly collaborative and offers the opportunity to obtain first results on new discoveries, as well as provide initial samples and data for the development of future research expeditions and funding requests to support the exciting research that comes out of our discoveries during exploration of the oceans. 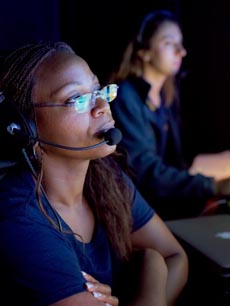 One of Ruth Blake’s duties on the E/V Nautilus was to control the remotely operated vehicles that gather samples from the ocean floor. (Image credit: Photo via Ocean Exploration Trust)

What were some of the scientific opportunities specific to the Windward Passage?

Although the Windward Passage has historically been, and remains, an important shipping route in the region, it has received little exploration. The main scientific objective of this leg was to explore large, seafloor faults and tectonic features, such as submarine landslides in the area — the Septentrional fault, north of Haiti, that runs through the Windward Passage and connects with the Oriente fault near Cuba; and the Enriquillo-Plantain-Garden (EPG) fault, which is associated with the devastating 2010 earthquake and tsunami in Haiti. The EPG fault runs from Jamaica, through the Jamaica Channel, cutting right through the southern peninsula of Haiti, past Port Au Prince and continuing into the Dominican Republic.

A second objective was to explore the seafloor around the island of Navassa (an island between Jamaica and Haiti that is a U.S. territory), which has never been explored. As part of my research during this leg, Hercules (one of the ROVs) collected samples of phosphorite rock from the seafloor. My lab, the Center for Phosphorus Research at Yale, is engaged in developing new stable isotope tools, geochemical proxies, and biomarkers to study marine/microbial phosphorus cycling and the evolution of the phosphorus cycle from pre-biotic life to recent, on Earth and in extraterrestrial systems.

A third objective was to explore the corals and other biota occurring within the mesophotic zone, which is found at water depths of approximately 40 to 150 meters, around Navassa Island and also Haiti. Unlike more shallow zones of coral reefs, the deeper mesophotic zone of lower light penetration has not been well studied and is expected to harbor unknown and undocumented species.

What was your favorite part of the trip?

Learning new things like navigating the ROVs, doing live interactions with Mystic Aquarium via the ship’s telepresence technologies, and answering all of the great questions that came in from all over the world through the interactive Nautilus Live website.