A significantly greater number of students fail science, engineering and math courses that are taught lecture-style than fail in classes incorporating so-called active learning that expects them to participate in discussions and problem-solving beyond what they’ve memorized.

Active learning also improves exam performance – in some cases enough to change grades by half a letter or more so a B-plus, for example, becomes an A-minus.

Those findings are from the largest and most comprehensive analysis ever published of studies comparing lecturing to active learning in undergraduate education, said Scott Freeman, a University of Washington principal lecturer in biology. He’s lead author of a paper in the Proceedings of the National Academy of Sciences the week of May 12. 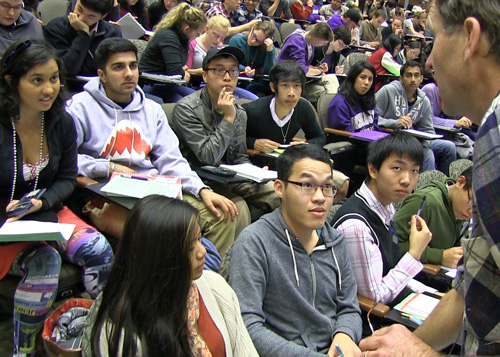 Freeman heads into the auditorium to help as students huddle trying to reason out an answer to a genetics question. Image credit: U of Washington

Freeman and his co-authors based their findings on 225 studies of undergraduate education across all of the “STEM” areas: science, technology, engineering and mathematics. They found that 55 percent more students fail lecture-based courses than classes with at least some active learning. Two previous studies looked only at subsets of the STEM areas and none before considered failure rates.

“If you have a course with 100 students signed up, about 34 fail if they get lectured to but only 22 fail if they do active learning according to our analysis,” Freeman said. “There are hundreds of thousands of students taking STEM courses in U.S. colleges every year, so we’re talking about tens of thousands of students who could stay in STEM majors instead of flunking out – every year.” 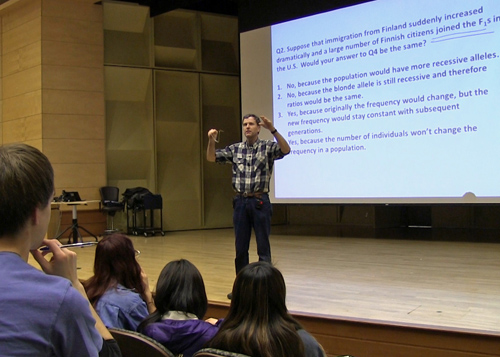 Scott Freeman proposes a question, has students consider answers individually or in groups and then calls on students at random to explain their reasoning – an approach he and colleagues call “Ask, don’t tell.” Image credit: U of Washington

This could go a long way toward meeting national calls like the one from the President’s Council of Advisors on Science and Technology saying the U.S. needs a million more STEM majors in the future, Freeman said.

Attempts by college faculty to use active learning, long popular in K-12 classrooms, started taking off in the mid-1990s, Freeman said, though lecturing still dominates.

“We’ve got to stop killing student performance and interest in science by lecturing and instead help them think like scientists,” he said.

In introduction to biology courses, Freeman’s largest UW class had 700 students, he expects students to read their $200 textbooks and arrive in class knowing the material for the day. Quizzes on the readings the night before keep their feet to the fire.

“These students got into college by being ferocious memorizers so we don’t need to spend class time going over what they’ve already read,” Freeman says. “A reading assignment on how sperm and eggs form might then lead me to ask the class how male contraceptives might work. After giving them time to come up with their own ideas and rationale, I might give them a couple more minutes to discuss it with each other, and then I call on students randomly to start the discussion.”

Knowing they could get called on at any time encourages students to stay focused.

Having students use clickers ­– hand-held wireless devices – to answer multiple-choice questions in class is another example of how active learning keeps students engaged.

“We characterize it as, ‘Ask, don’t tell,’” said Mary Wenderoth, a UW principal lecturer and a co-author on the paper.

For the paper, more than 640 studies comparing lecturing with some kind of active learning were examined by Freeman, Wenderoth and their other co-authors, Sarah Eddy, Miles McDonough, Nnadozie Okoroafor and Hannah Jordt, all with the UW biology department, and Michelle Smith with the University of Maine. The studies, conducted at four-year and community colleges mainly in the U.S., appeared in STEM education journals, databases,  dissertations and conference proceedings.

Some 225 of those studies met the standards to be included in the analysis including: assurances the groups of students being compared were equally qualified and able; that instructors or groups of instructors were the same; and that exams given to measure performance were either exactly alike or used questions pulled from the same pool of questions each time.

The data were considered using meta-analysis, an approach long used in fields such as biomedicine to determine the effectiveness of a treatment based on studies with a variety of patient groups, providers and ways of administering the therapy or drugs.

About grade improvement, the findings showed improvements on exams increased an average of 6 percent. Using grading typical in UW’s introductory biology, physics and chemistry courses, a gain of 6 percent would have raised students half a grade turning a C-plus into a B-minus, for example, or a B-plus into an A-minus.

“That 840,000 students is a large portion of the million additional STEM majors the president’s council called for,” Freeman said.

Community colleges and universities could help faculty incorporate effective active learning by providing guidance – the UW, for instance, has a Center for Teaching and Learning to share expertise – as well as rewards, Freeman said.