Gaining more insight into predicting how genes affect physical or behavioral traits by charting the genotype-phenotype map holds promise to speed discoveries in personalized medicine. But figuring out exactly how genes interact has left parts of the map invisible.

In a paper published in Proceedings of the National Academy of Sciences, North Carolina State University genetics researchers reveal some of the hidden portions of the map, showing that complicated networks of gene-gene interactions in fruit flies greatly influence the variance in quantitative traits, or characteristics that are influenced by multiple genes – like sensitivity to alcohol or aggression. 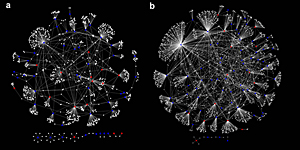 The effects of these gene-gene interactions, known as epistatic effects, are difficult to gauge in human populations because some variations are unknown, says Dr. Trudy Mackay, William Neal Reynolds and Distinguished University Professor of Genetics at NC State and the paper’s corresponding author.

“One of the ways we model the genotype-phenotype map in humans – one variant at a time – may be wrong,” Mackay says. “Over the past four or five years, thousands of genomewide studies have focused on how variants affect traits, but the effects shown have been really small.

Enter Mackay and her fruit flies – nearly 200 lines of genetically identical flies that are also a sample of genetic variations for different traits, as well as thousands of flies that were crossbred to shuffle up the genes.

However, the paper showed that the epistatic networks could be used to predict variation in the three studied traits.

Mackay says the knowledge gained in this paper could be used to look for epistatic interactions in human genome association studies.

“Understanding how genetic variation in an individual gives rise to susceptibility to complex diseases like diabetes or schizophrenia – or even to traits like height – is one of the open questions in quantitative genetics today, ” Mackay says. “Knowing a person’s particular variants could motivate therapeutic treatments.”

The study was funded by the National Institutes of Health and the National Human Genome Research Institute. Colleagues from the Baylor College of Medicine collaborated on the research.