The Zika virus now active in numerous countries, and the severe birth defects associated with it, makes it clear that infection in pregnant women can have immediate and devastating effects on the developing baby.

“Zika is the example we all know about right now,” said neuroscientist Jaclyn Schwarz, assistant professor in the University of Delaware’s Department of Psychological and Brain Sciences. “But any infection in a pregnant woman can affect the fetus, and we also know that any immune response [the body’s defense against infection] does affect your brain.”

Schwarz recently was awarded a five-year, $1.8 million grant from the National Institutes of Health to support her research on infections that occur either before or shortly after birth.

She’s looking into whether such an infection — from bacteria or any other source that activates the body’s immune response to counteract it — can be a risk factor for developmental disorders years later. 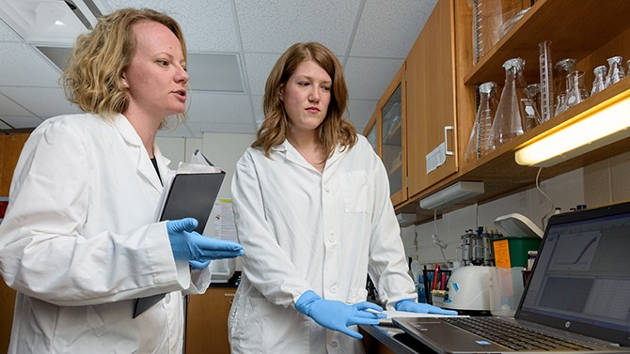 Among the possible disorders are learning disabilities and autism, generally diagnosed in early childhood, and schizophrenia, often diagnosed in late adolescence.

“We know from previous research that if Mom has influenza in the second or third trimester, there’s an increased risk of mental health problems later in the child’s life,” Schwarz said.

Of course, many people exposed to infection before birth or early in life never experience developmental disorders. Schwarz thinks that an early-life immune response is just the first step in a process that can lead to such conditions.

“No one, single thing causes autism or schizophrenia, as far as we know,” she said. “But we think that something happens with an infection early in life that primes the brain to be vulnerable to other factors that do lead to these kinds of disorders.”

Although the impact of early-life infections on brain development has been studied by other researchers, Schwarz’s lab is interested in filling in what she sees as some gaps in previous work.

One of those involves sex differences, which she said are often not considered in research using animal models, as the investigators tend to rely only on male rats, for example. But in humans, boys are diagnosed much more often than girls with such disorders as autism and schizophrenia, so some type of sex difference seems obvious, Schwarz said.

“That suggests to me that boys are more vulnerable in utero to immune challenges,” she said.

“These sex differences have been ignored for a long time, so the potential for discovery is huge. And the implications for health are huge, too.”

Another gap in previous studies involves the tendency of researchers to observe the effects of an infection on brain and behavior in newborns and then in adults, Schwarz said. Instead, she plans to study the effects at regular intervals throughout the lifespan.

“The immune system responds to so many different things — alcohol, drugs, virus, bacteria, toxins — that probably no one thing is the answer to developmental disorders,” Schwarz said. “But I think the immune system is a strong link to a number of things that happen later in life.”

Ultimately, Schwarz hopes her project can help identify the point in brain development at which things can start to go wrong and, by then finding the markers for that process, future therapies can be developed to intervene.