Imagine: Material That If Scratched, You Can Quickly and Easily Fix Yourself, With Light Not Heat

Imagine you’re driving your own new car–or a rental car–and you need to park in a commercial garage. Maybe you’re going to work, visiting a mall or attending an event at a sports stadium, and you’re in a rush. Limited and small available spots and concrete pillars make parking a challenge. And it happens that day: you slightly misjudge a corner and you can hear the squeal as you scratch the side of your car–small scratches, but large anticipated repair costs.

Now imagine that that you can repair these unsightly scratches yourself–quickly, easily and inexpensively–or that you can go through a car wash that can detect these and other more minor scratches and fix them as the car goes through the washing garage. Fantasy. Not exactly. Not anymore. Not according to a new discovery detailed in the April 21 issue of the journal Nature, and depicted in a short video interview and simulation.

A team of researchers in the United States and Switzerland have developed a polymer-based material that can heal itself with the help of a widely used type of lighting. Called “metallo-supramolecular polymers,” the material is capable of becoming a supple liquid that fills crevasses and gaps left by scrapes and scuffs when placed under ultraviolet light for less than a minute and then resolidifying. 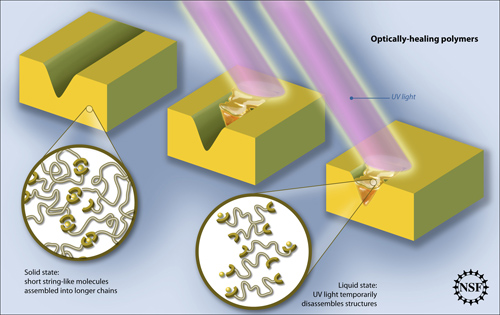 Schematic of optically healing polymers. The specially designed polymer molecules that make up the solid item can be disassembled by the UV light so that they flow and fill in the cracks. When the light is turned off, the molecules reassemble themselves and the filled cracks become rigid again. Image credit: Zina Deretsky, National Science Foundation, after Burnworth et al., Nature, April 21, 2011

The team involves researchers at Case Western Reserve University in Cleveland, Ohio, led by Stuart J. Rowan; the Adolphe Merkle Institute of the University of Fribourg in Switzerland, led by Christoph Weder; and the Army Research Laboratory at Aberdeen Proving Ground in Maryland, led by Rick Beyer.

The scientists envision widespread uses in the not-so-distant future for re-healable materials like theirs, primarily as coatings for consumer goods such as automobiles, floors and furniture. While their polymers are not yet ready for commercial use, they acknowledge, they now have proved that the concept works. And with that, what happens next is up to the market place. Necessity, the mother of invention, will expand the possibilities for commercial applications.

“These polymers have a Napoleon Complex,” explains lead author Stuart Rowan, a professor of macromolecular engineering and science and director of the Institute for Advanced Materials at Case Western Reserve University. “In reality they’re pretty small but are designed to behave like they’re big by taking advantage of specific weak molecular interactions.”

“Our study is really a fundamental research study,” said Christoph Weder, a professor of polymer chemistry and materials and the director of the Adolphe Merkle Institute. “We tried to create materials that have a unique property matrix, that have unique functionality and that in principle could be very useful.”

Specifically, the new materials were created by a mechanism known as supramolecular assembly. Unlike conventional polymers, which consist of long, chain-like molecules with thousands of atoms, these materials are composed of smaller molecules, which were assembled into longer, polymer-like chains using metal ions as “molecular glue” to create the metallo-supramolecular polymers.

While these metallo-supramolecular polymers behave in many ways like normal polymers, when irradiated with intense ultraviolet light the assembled structures become temporarily unglued. This transforms the originally solid material into a liquid that flows easily. When the light is switched off, the material re-assembles and solidifies again; its original properties are restored.

Using lamps such as those dentists use to cure fillings, the researchers repaired scratches in their polymers. Wherever they waved the light beam, the scratches filled up and disappeared, much like a cut that heals and leaves no trace on skin. While skin’s healing process can be represented by time-lapse photography that spans several days or weeks, self-healing polymers heal in just seconds.

In addition, unlike the human body, durability of the material does not seem to be compromised by repeated injuries. Tests showed the researchers could repeatedly scratch and heal their materials in the same location.

Further, while heat has provided a means to heal materials for a long time, the use of light provides distinct advantages, says Mark Burnworth, a graduate student at Case Western Reserve University. “By using light, we have more control as it allows us to target only the defect and leave the rest of the material untouched.”

The researchers systematically investigated several new polymers to find an optimal combination of mechanical properties and healing ability. They found that metal ions that drive the assembly process via weaker chemical interactions serve best as the light-switchable molecular glue.

They also found the materials that assembled in the most orderly microstructures had the best mechanical properties. But, healing efficiency improved as structural order decreased.

“Understanding these relationships is critical for allowing us improve the lifetime of coatings tailored to specific applications, like windows in abrasive environments” Beyer said.

And what’s next? According to Rowan, “One of our next steps is to use the concepts we have shown here to design a coating that would be more applicable in an industrial setting.”

Film director and art curator Aaron Rose was at least partially right when he said, “In the right light, at the right time, everything is extraordinary.” Self-healing polymers certainly are extraordinary.