Heading into the U.S. national finals, Microsoft’s signature technology competition has reached 1.25 million students worldwide over the past 10 years.

REDMOND, Wash. — April 20, 2012 — Across every industry — from healthcare to transportation and agriculture to infrastructure — the world has a never-ending need for inspired minds to find creative solutions that solve tough challenges. Yet it’s been estimated that 1 million science and engineering jobs will go unfilled in the U.S. alone over the next three to five years.

According to Mark Hindsbo, vice president of Microsoft’s U.S. Developer & Platform Evangelism Group, that’s why programs like the Imagine Cup are so important. Encouraging students to develop technology-based solutions for real-world issues, and inspiring them to pursue careers in science, technology, engineering and mathematics, has been the mission of Microsoft’s signature technology competition for the past decade. Hindsbo has been involved with the competition since its beginnings. Every year, he says, the judges are amazed by the contestants’ projects and enthusiasm.

“These students who compete, they don’t just code,” Hindsbo says. “They come up with the idea. They make it real. This is exactly the type of person we need, with creativity, the ability to spot opportunities and convert them into reality.”

This weekend, 73 students will compete at the Imagine Cup 2012 U.S. finals on the Microsoft campus in Redmond. The U.S. Imagine Cup is one of more than 70 regional Imagine Cup events that are happening around the world this spring. The software design competition winners from each event will advance to July’s worldwide finals in Sydney, Australia.

This year, one U.S. team has created a solution that uses cell phones to increase child vaccination levels in India, and others have created games that serve to increase awareness of social issues. Last year’s U.S. national winners built an assistive camera for the blind and visually impaired based on a Tablet PC and Microsoft OneNote. At the 2011 worldwide finals, the winners were a team from Ireland who designed a device that monitors driving behavior and provides real-time feedback.

“We have a deep-rooted belief that the magic of software can help solve our toughest problems, and that students can take on that challenge and contribute to it,” says Hindsbo. “And every year they prove us right.” 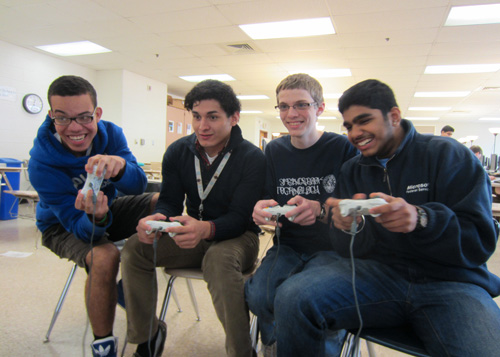 When Imagine Cup started 10 years ago, a few thousand students participated worldwide. Since then, more than 1.25 million students have dared to dream big, and the competition’s finals have been held in countries around the world, including Egypt, France, Brazil and the U.S.

Ask Hindsbo for his fondest memory of the program and he can’t name just one, except perhaps for the 2011 finals in New York, where students from 100 different countries gathered under the Statue of Liberty and mingled as if it were the most natural thing in the world.

“We’ve taken a big step forward in our first 10 years,” says Hindsbo. “At the same time, have we achieved our full vision? No. We need to put another order of magnitude on the number of students that we inspire to pursue a science degree or profession.”

“I Just Decided to Go For It”

Besides the excitement of competition, participants say Imagine Cup offers real benefits that can help anybody in life — working with a cross-disciplinary team, building a project, making tradeoffs on what can and can’t be done in a given timeframe, and seeing it through to completion.

Pat Yongpradit teaches computer science at Springbrook High in Silver Spring, Md. In 2010, he led the first high school team to make it to the Imagine Cup U.S. Finals. That year, two freshmen from Springbrook attended the finals to observe, both of whom are on the school’s team competing in the U.S. finals this week.

“Imagine Cup gives our students a chance to show off their skills to the world, gives them exposure to global issues and global themes, and provides a great audience for their creativity,” Yongpradit says. “For me it’s a way to celebrate what these kids are doing already.” 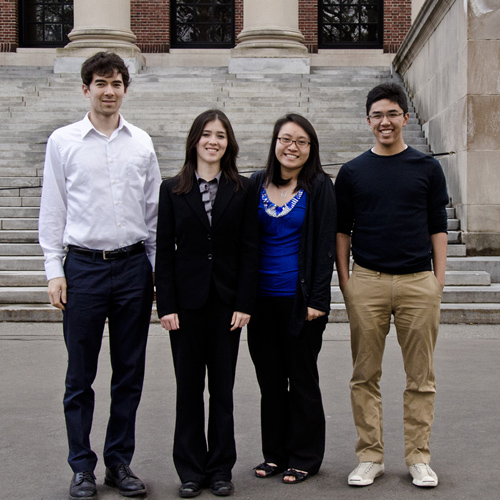 Springbrook’s team this year is called “Digital Infinity,” and they’ve created a game designed to build awareness about sustainable energy. With a narrative based on Japan’s efforts to recover from the devastating 2011 Tohoku earthquake and tsunami, the game is a puzzle where players work to provide electricity to villages by constructing waterwheels and wiring villages more efficiently.

Although the voting isn’t over, Digital Infinity has been ranked No. 1 this week on Imagine Cup’s People’s Choice , and has a real shot at winning the award.

According to Yongpradit, the goal of his curriculum is to put professional-level tools in the hands of students. His class uses Visual Studio 2010 Express to create games for the PC and phone. Two of the team’s members, Andrew Dicken and Abhinav “AJ” Jambulingam, already have apps on the Windows Phone Marketplace. Listening to Dicken, it’s quickly apparent how sophisticated these students’ technology skills have become.

“For this game, we used XMA, which is a plug-in for the C# programming language in Visual Studio,” says Dicken. “We also used Photoshop for the art.”

Part of the game’s success also relies on its strong visual appeal. Rather than going with a team of pure technologists, Digital Infinity enlisted Springbrook art student David Gonzalez, who has done a great deal of research to bring traditional Japanese artistic influences into the game’s look and feel.

“I just decided to go for it,” Gonzalez says. “As time went on, I fell more in love with the game, the project, the contest, the competition. And then seeing the support of the people in the voting as well, it’s been a great life experience and I can’t wait to see what happens.”

While Gonzalez is the game’s artist, other team members have specific roles too — an idea that Yongpradit says is based on real-world software development, where cross-disciplinary teams must find a way to accomplish large projects together. Jambulingam and Dicken share the programming role. Another team member, Ronny Ortiz, works on the design of the game and its presentation.

“We’re explaining everything to each other, doing time management,” says Ortiz. “Going on to college and working with other people, these are important skills to have.”

“Resources Will Surface That You Didn’t Think You Had”

Although the game category is a great way for students to bring attention to societal issues, other students focus their efforts on practical challenges. Such is the case with team Remindavax, a joint effort of students from Harvard and MIT that was brought about by siblings Alex and Annie Ryu.

Alex’ expertise is global health economics and policy. While working on a micro-insurance project in rural India, he observed that maternal health treatments were experiencing spotty results, especially when it came to important vaccinations for diseases such as diphtheria, tetanus and pertussis.

At the same time, Annie was researching rural housing in Nicaragua, spending a lot of time in rural areas with extreme poverty. Thousands of miles apart, the Ryus made a similar observation.

“Every family had a cell phone, no matter what else they could afford,” Alex says. “So we thought there was an opportunity to address this problem in maternity and child care using cell phones.”

The Ryus enlisted the help of colleagues Jared Wong, from MIT, and Joy Ming to create a solution based on MMS technology in combination with an online database. Using information already obtained by the Indian government to track pregnancies and births, the team built a system that automatically sends text-message reminders to expectant and new mothers about pre- and post-natal checkups. The information is also sent to community health caseworkers, who can help reinforce the importance of the care.

The solution has been rolled out in 12 clinics across the South-Indian state of Karnataka, and the team has been working with the Harvard School of Public Health to quantify the results. Despite natural barriers in language, education and connectivity, the data shows an increase in vaccination adherence during the critical third immunization checkup.

“We’ve seen that text messages can help, even though we’re dealing with a number of challenges that could have reduced the results,” says Annie Ryu. “It’s given us a lot of encouragement to move forward and apply it more broadly.”

Having qualified for the U.S. finals in their second Imagine Cup, team Remindavax is committed to pressing forward. The group is looking to expand its solution to treat other conditions, and to operate in other areas of the globe, including domestically.

“Social entrepreneurship has really blown up to be one of the hottest careers right now, and it’s for a fantastic reason,” says Alex Ryu. “You’re able to support a business and create something of value, while at the same time creating social impact. It’s incredibly important.”

Microsoft’s Hindsbosays their solution is a reminder of the mission of the Imagine Cup, and a great example of the power that young people can have when they come together to solve a problem.

“We really do believe in the magic of software to help solve the world’s toughest challenges,” says Hindsbo. “Technology can help with fighting disease, fighting poverty. That is the inspiration behind Imagine Cup, and every year we see teams that have gone beyond what we ever dreamed of when we started the program.”

So, what would experienced contestants like the Ryus say to a student who is coming into the Imagine

Cup competition and looking for an idea to make a difference?

“I think one of the most important things is go on your own experiences,” says Alex. “Keep open eyes to the world around you, and notice where you have an opportunity to make an impact.”

Once the idea is in place, even if it seems like too big of a dream, Annie Ryu advises students to go after it anyway.

“A lot of people are afraid to follow a huge dream because they don’t have the resources or the expertise,” she says. “I encourage them to just go after it. People who wouldn’t have reached out to you will emerge, just from the fact that you’re so passionately pursuing this project. Resources will surface that you didn’t think you had.”

It’s a great strategy not only for the Imagine Cup, but for life as well.