*After competing in the 2004 Imagine Cup, a team from France started what would turn into one of Europe’s most popular social gaming sites.*

Redmond, Wash., June 28, 2010 – Six years ago, Vincent Vergonjeanne and a few college friends represented France at the Imagine Cup, the world’s largest student technology competition. After several days of presentations, they captured the top prize in the software design competition.

Last month, some of those teammates found themselves in another Microsoft-sponsored competition. This time it only took five minutes to win.

Instead of representing France, though, the former students were pitching the company they started two years ago called Kobojo. They were competing at Microsoft’s annual BizSpark Summit, which brings together startups, investors, and government representatives to discuss how to collaborate and foster European competitiveness. Eighteen startups from across the continent had been invited to pitch their company to a group of venture capitalists. After each gave their five-minute sell, the audience picked Kobojo as the best investment bet.

“We have a lucky charm when it comes to Microsoft competitions,” says Vergonjeanne, chief executive officer of Kobojo. In less than two years, Kobojo has become one of the most popular social gaming sites in Europe. More than 5 million users visit the site every month to download and play its social network- based games and applications. The company is making a profit and continues to grow, but the four Imagine Cup alums remain the company’s core.

Vergonjeanne said it was their experience at the Imagine Cup that put the team on the path to forming their own company.

“The Imagine Cup as a rule is a very entrepreneurial experience,” Vergonjeanne says. “It asks people to develop something way further than a simple school project but something with an actual business vision and every single aspect of what makes a successful project in the real world. I think that exposure was a great asset for us after the Imagine Cup to guide us through Kobojo.” 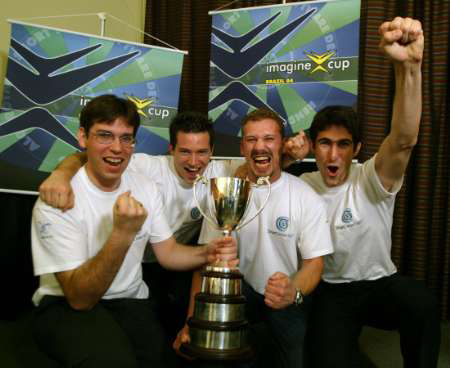 The Kobojo story illustrates how Microsoft programs like BizSpark and the Imagine Cup can propel students to entrepreneurship, says Walid Abu-Hadba, corporate vice president of the Developer and Platform Evangelism Group.

“The future of computing is developed by students and young entrepreneurs working in dorm rooms, garages and coffee shops,” Abu-Hadba says. “Microsoft is enabling the next generation of software developers by providing the tools and opportunities they need to learn, develop skills, and turn their ideas into realties. We are committed to doing everything we can to help spur those game-changing advancements through programs like Imagine Cup, DreamSpark, and BizSpark.”

When they started their company in 2008, the Imagine Cup alums approached Microsoft and asked for help. They entered the company’s BizSpark program, which provided them with business training and technical support as well as enabling them to meet with useful partners. It also gave them access to technology like Windows Azure. “We totally are Microsoft kids in a sense,” Vergonjeanne says. “Everything we do is with Microsoft technology. It’s natural for us.”

The same year he helped found the company, Vergonjeanne returned to the Imagine Cup as a judge. He called it a refreshing experience to be on the other side of the judges’ table. “Once you step into business life, seeing all these great ideas gives you a lot of energy to keep innovating and moving on whatever you’re doing. It was a great experience to go back to the Imagine Cup after all those years and give some of that energy back.”

Vergonjeanne talked about his experiences as an Imagine Cup participant and judge on the eve of the 2010 Imagine Cup World Finals in Warsaw, Poland. He remembers well the preparation the students are going through now. His top advice: Don’t be afraid to fail.

He points to the early days of Kobojo, when the company made a grand total of $80. “We could have looked at it as a failure and said, ‘We made no money, we should just give up right now.’ Instead, we decided to look at the glass half full.” Vergonjeanne urges those attending this year’s Imagine Cup to take the same approach – if they don’t win, he says, they still are well positioned to build their own business. “(Not winning) might look like a failure, but it’s not. It’s actually a wonderful first step toward entrepreneurship, which I say from the bottom of heart just do it,” he says. “If you have an idea, stop talking about it and act.”