Summer in Southern Arizona brings out the shiny auto sunshades, the supersized water bottles – and the scorpions.

The Arizona Poison and Drug Information Center, located at the University of Arizona College of Pharmacy in Tucson, reminds citizens of the desert that venomous scorpions share our habitat, and that sometimes we come closer to one another than we want. Since Jan. 1, the poison center has recorded more than 1,000 scorpion stings in its service area, which includes all counties in the state except Maricopa.

“We’ve had more than 280 stings in June alone, and nearly 700 since April 1, when ‘sting season’ unofficially begins,” said Keith Boesen, managing director of the poison center. “There were a total of 2,535 stings during 2010.” 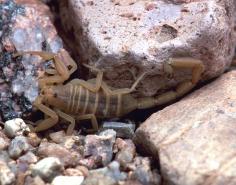 Scorpion stings are quite often very painful, Boesen said, but the majority do not require special medical treatment. Usually washing the site of the sting, applying a cool compress and using a painkiller such as aspirin or Tylenol handles the injury. The pain of the sting may last several minutes to days; numbness brought on by the sting may linger several hours or even days.

Sometimes though, a scorpion sting causes severe symptoms that require fast and expert medical care. These symptoms may include difficulty breathing, uncontrolled jerking, drooling and wild eye movements. The best advice when stung by a scorpion: call 1-800-222-1222 and tell the poison specialists about your symptoms.

“Severe symptoms are a result of the scorpion’s venom really disrupting the person’s nervous system,” said Dr. Mazda Shirazi, medical director of the Arizona Poison and Drug Information Center. “Although we have not had a reported death from a scorpion sting in many years, some stings can be life-threatening.”

“We’re fortunate in Arizona now in that we have a scorpion antivenom – a medicine that counteracts the effects of the sting – that we’ve been testing for five years with very good results,” Shirazi said. “Many hospitals across the state have that antivenom to use with their patients. It can save hours and even days of hospitalization for both children and adults, countering the severe effects of the sting very quickly.”

Though most of us do not wish to be close friends with the scorpions in our neighborhoods, all of us can benefit from knowing the basics about them.

•The venom that causes pain and other symptoms is in the scorpion’s tail, not in its mouth. If you are injured by a scorpion, you have a scorpion sting, not a bite.

•There are 30 species of scorpions found in Arizona. Only one, the bark scorpion, has a venom that can be life-threatening to people.

•The bark scorpion is only about an inch and a half long when fully grown. It is light tan in color and has slender tail segments and pincers.

•Because it is much smaller than many other scorpion species, people sometimes mistakenly describe the adult bark scorpion as a “baby.”

•Scorpions are relatively inactive during the daylight hours. The majority of stings reported to the poison center occur at night during the warm summer months.

•Bark scorpions burrow and hide from view in daylight. If they are inside your house, they will go to corners, closets, shoes, toy bins-anyplace dark and cool.

•Scorpions don’t “attack” people in the sense that they come after you. Stings occur when you step on, sit on, roll over on or otherwise touch or come very close to a scorpion. Wearing shoes and shaking out clothing and bedding is a good precaution against stings.

•Scorpions have a natural fluorescence that is very visible under ultraviolet light. You can use a “black” light, usually available in hardware stores, to find scorpions inside or outside your home.

•The best climber of the scorpion species, the bark scorpion is agile enough to climb up walls or the legs of furniture. If you live where scorpions are common, you may want to protect infants from possible stings by placing the legs of cribs inside glass containers. The glass is too slippery for the scorpions to climb.

Scorpions have existed for millions of years, and their natural defenses make it hard to exterminate them from your property.

One of the best ways to keep them from inside your house is sealing up all the possible points of entry-a crevice big enough for the edge of a credit card provides plenty of room for a bark scorpion to enter.