Ice Core Drilling Effort Involving CU-Boulder Should Help Assess Abrupt Climate Change Risks An international science team involving the University of Colorado at Boulder that is working on the North Greenland Eemian Ice Drilling project hit bedrock July 27 after two summers of work, drilling down more than 1.5 miles in an effort to help assess the risks of abrupt future climate change on Earth.

Led by Denmark and the United States, the team recovered ice from the Eemian interglacial period from about 115,000 to 130,000 years ago, a time when temperatures were 3.6 to 5.4 degrees Fahrenheit above today’s temperatures. During the Eemian — the most recent interglacial period on Earth — there was substantially less ice on Greenland, and sea levels were more than 15 feet higher than today.

While three previous ice cores drilled in Greenland in the last 20 years recovered ice from the Eemian, the deepest layers were compressed and folded, making the data difficult to interpret. The new effort, known as NEEM, has allowed researchers to obtain thicker, more intact annual ice layers near the bottom of the core that are expected to contain crucial information about how Earth’s climate functions, said CU-Boulder Professor Jim White, lead U.S. investigator on the project.

“Scientists from 14 countries have come together in a common effort to provide the science our leaders and policy makers need to plan for our collective future,” said White, who directs CU-Boulder’s Institute of Arctic and Alpine Research and is an internationally known ice core expert. “I hope that NEEM is a foretaste of the kind of cooperation we need for the future, because we all share the world.” 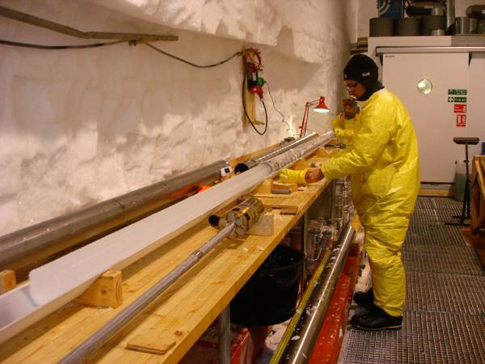 About the image: An international drilling team involving CU-Boulder has hit bedrock 1.5 miles below the icy surface of Greenland, pulling up deep ice cores from the last interglacial period that should help climate scientists assess the risks of abrupt climate change on a warming Earth. Image courtesy NEEM ice core drilling project

Annual ice layers formed over millennia in Greenland by compressed snow reveal information on past temperatures and precipitation levels, as well as the contents of ancient atmospheres, said White. Ice cores from previous drilling efforts revealed temperature spikes of more than 20 degrees Fahrenheit in just 50 years in the Northern Hemisphere.

White said the new NEEM ice cores will more accurately portray past changes in temperatures and greenhouse gas concentrations in the Eemian, making it the best analogue for future climate change on Earth. An international study released by the National Oceanic and Atmospheric Administration last week showed the first decade of the 21st century was the warmest on record for the planet.

The NEEM project involves 300 scientists and students and is led by Professor Dorthe Dahl-Jensen, director of the University of Copenhagen’s Centre of Ice and Climate. The United States portion of the effort is funded by the National Science Foundation’s Office of Polar Programs.

The two meters of ice just above bedrock from NEEM — which is located at one of the most inaccessible parts of the Greenland ice sheet — go beyond the Eemian interglacial period into the previous ice age and contains rocks and other material that have not seen sunlight for hundreds of thousands of years, said White. The researchers expect the cores to be rich in DNA and pollen that can tell scientists about the plants that existed in Greenland before it became covered with ice.

The cores samples are being studied in detail using a suite of measurements, including stable water isotopes that reveal information about temperature and moisture changes back in time. The team is using state-of-the art laser instruments to measure the isotopes, as well as atmospheric gas bubbles trapped in the ice and ice crystals to understand past variations in climate on a year-by-year basis, said White.

As part of the project, the researchers want to determine how much smaller the Greenland ice sheet was 120,000 years ago when the temperatures were higher than present, as well as how much and how fast the Greenland ice sheet contributed to sea level. “We expect that our findings will increase our knowledge on the future climate system and increase our ability to predict the speed and final height of sea level rise during the Eemian,” said Dahl-Jensen.

The NEEM facility includes a large dome, a drilling rig to extract 3-inch in diameter ice cores, drilling trenches, labs and living quarters. The United States is leading the laboratory analysis of atmospheric gases trapped in bubbles within the cores, including greenhouse gases like carbon dioxide and methane.

Other nations involved in NEEM include Belgium, Canada, France, Germany, Iceland, Japan, Korea, the Netherlands, Sweden, Switzerland and the United Kingdom. Other U.S. institutions involved in the effort include Oregon State University, Penn State, the University of California, San Diego and Dartmouth College.

Additional information and photos on the NEEM effort can be found on the web at https://www.neem.ku.dk.

More information on the international NEEM deep drilling project can be obtained either by emailing White or contacting NEEM Field Operation Manager J.P. Steffensen at +299 84 11 51 or +299 52 41 25 or emailing him at neem-fom@gfy.ku.dk