ARMONK, N.Y. – 10 Jan 2013: IBM today announced that it received a record 6,478 patents in 2012 for inventions that will enable fundamental advancements across key domains including analytics, Big Data, cybersecurity, cloud, mobile, social networking and software defined environments, as well as industry solutions for retail, banking, healthcare, and transportation. These patented inventions also will advance a major shift in computing, known as the era of cognitive systems.

This is the 20th consecutive year that IBM topped the annual list of U.S. patent recipients. 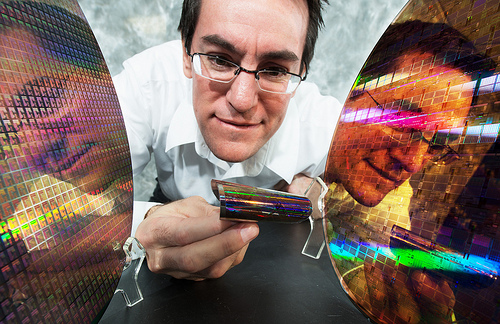 A Patent Milestone. IBM topped the U.S. patent list for the 20th consecutive year in 2012. The company's inventors received a record 6,478 patents in 2012 for a range of inventions that will enable advancements across key domains, such as analytics, Big Data, cybersecurity, cloud, mobile, and a new era of cognitive computing systems. IBM Master Inventor Stephen Bedell (pictured) shows a new class of flexible and versatile semiconductor materials enabled by U.S. Patent #8,247,261 that will power ultra-thin, lightweight and flexible products and can be applied to a wide range of technologies such as biomedical, security, wearable computing and solid-state lighting. (Image credit: Jon Simon/Feature Photo Service for IBM)

“We are proud of this new benchmark in technological and scientific creativity, which grows out of IBM’s century-long commitment to research and development,” said Ginni Rometty, chairman and CEO, IBM. “Most concretely, our 2012 patent record and the two decades of leadership it extends are a testament to thousands of brilliant IBM inventors — the living embodiments of our devotion to innovation that matters, for our clients, for our company and for the world.” 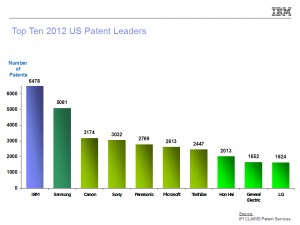 IBM’s record 2012 patent output featured inventions that are reshaping how companies are applying technology in today’s world of a Smarter Planet and those that are laying the groundwork for the new era of cognitive systems:

· U.S. Patent #8,275,803: System and method for providing answers to questions – This patented invention was implemented in the IBM Watson system and describes a technique that enables a computer to take a question expressed in natural language, understand it in detail, and deliver a precise answer to the question.

· U.S. Patent #8,250,010: Electronic learning synapse with spike-timing dependent plasticity using unipolar memory-switching elements – This patent relates to algorithms and circuits for efficiently mimicking the learning function of a brain’s synapses and lays the foundation for a non-von Neumann computer architecture. IBM is working on a cognitive computing project called Systems of Neuromorphic Adaptive Plastic Scalable Electronics (SyNAPSE), which aims to emulate the brain’s abilities for perception, action and cognition while consuming orders of magnitude less power and volume without being programmed.

· U.S. Patent #8185480: System and method for optimizing pattern recognition of non-gaussian parameters – This patent describes a technique for dealing with and recognizing patterns in fast growing, large data sets of complex information, such as understanding of spoken phrases or processing satellite data to predict locations of traffic jams.

· U.S. Patent #8,247,261: Thin substrate fabrication using stress-induced substrate spalling – This patent describes a low-cost method for manufacturing a new class of flexible semiconductor materials that will enable ultra-thin, lightweight and flexible products and can be applied to a wide range of technologies such as biomedical, security, wearable computing and solid-state lighting.

· U.S. Patent #8,302,173: Providing a user device with a set of access codes – This invention provides a method to validate and retrieve one or several security codes –valid for only a very short period of time to enhance system security– via a mobile network (SMS, for example) and a separately encrypted channel from a secure server, for example, to complete a secure transaction or perform secure login operations via a mobile phone.

Examples of other interesting and important patented inventions from IBM’s record-breaking 2012 patent output can be found at: https://ibm.co/WreuUl.