ZURICH – 18 Apr 2011: Twenty-five years ago IBM scientists, J. Georg Bednorz and K. Alex Muller altered the landscape of physics when they observed superconductivity in an oxide material at a temperature 50 percent higher(1), (-238 deg C, -397 deg F) than what was previously known. This discovery opened an entirely new chapter in the field of physics and earned them the Nobel Prize for Physics in 1987.

This remarkable discovery, of an unlikely new class of materials that were previously abandoned, created a frenzy of activity by physicists who envisioned exciting new applications in measurement technology, electrotechnology and microelectronics.

“This discovery is quite recent – less than two years old – but it has already stimulated research and development throughout the world to an unprecedented extent,” Taken from the speech of Professor Gosta Ekspong of the Royal Swedish Academy of Sciences at the Nobel Prize award ceremony on 10 December 1987(3).

Superconductivity was discovered in 1911 by Heike Kamerlingh Onnes, a Dutch physicist, and to this day it is still one of the most dramatic phenomena that occurs in physics. It arises when some metals, such as tin or lead, are cooled to a temperature within a few degrees of absolute zero -273.15 deg C, (-459.67 deg F). For comparison, the coldest temperature ever recorded on Earth is -85 deg C (-121 deg F). 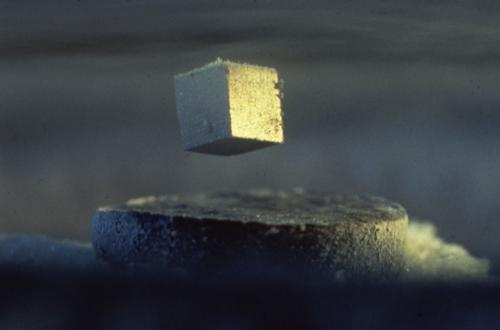 Twenty-five years ago IBM scientists, J. Georg Bednorz and K. Alex Muller altered the landscape of physics when they observed superconductivity in an oxide material at a temperature 50 percent higher 1, (-238 deg C, -397 deg F) than what was previously known. This discovery opened an entirely new chapter in the field of physics and earned them the Nobel Prize for Physics in 1987. In this photo, a levitating magnet, demonstrating the so-called Meissner effect, is the proof of superconductivity in the material below it. Image courtesy of IBM Research. Image credit: PRNewsFoto/IBM

When this happens, an electric current can flow perfectly through the material, with zero resistance — thus no energy is lost in the form of heat. At the time of its discovery scientists were already speculating its use for the transmission of electricity, which was still decades away from being applied outside of the lab environment.

A key test to check for superconductivity in materials is called the Meissner effect. In conducting the test, scientists cool the material in a small magnetic field below its superconducting state and observe how the field lines are expelled from its bulk. The related impressive result is the levitation of a small permanent magnet above such a superconductor.

For more than 75 years most scientists had only dreamed of finding a material that remains superconducting above -253.15 deg C (-423.67 deg F) and during this time progress was very slow. Even when new materials were discovered, the most promising being metals, they only improved temperatures by a fraction of a degree.

Then in 1983 IBM scientists Bednorz and Muller concentrated on oxides which include copper and one or more of the rare earth metals. Their breakthrough idea was that the copper atoms could be made to transport electrons, which interact more strongly with the surrounding crystal than they do in normal electrical conductors. To obtain a chemically stable material, the two scientists added barium to crystals of lanthanum-copper-oxide to produce a ceramic material that eventually became the first successful high-temperature superconductor.

Their discovery created a fever of activity with scientists around the world. This activity reached its boiling point at the American Physical Society meeting in New York City, 16-20 March 1987. Nicknamed the “Woodstock of Physics”(4)  by some the 2,000 attendees, the marathon session saw more than 50 scientists present their discoveries of newly formulated materials that achieved dramatically higher temperatures than ever before — all based on the discovery by Bednorz and Muller.

The discovery of high-temperature superconductivity is currently being applied and tested in several scenarios, but we are still years away from broader adoption:

The discovery of high-temperature superconductivity is one of IBM’s top 100 milestones that coincides with the celebration of IBM’s Centennial (www.ibm100.com). To mark IBM’s Centennial, the company is highlighting its leading role in transforming business, science and society, while also predicting advances for the next century.

(1) as measured from absolute zero

(2) An original copy of the paper is available by request