ARMONK, N.Y. – 09 Jan 2014: IBM today announced it will establish the IBM Watson Group, a new business unit dedicated to the development and commercialization of cloud-delivered cognitive innovations. The move signifies a strategic shift by IBM to accelerate into the marketplace a new class of software, services and apps that think, improve by learning, and discover answers and insights to complex questions from massive amounts of Big Data.

IBM will invest more than $1 billion into the Watson Group, focusing on development and research and bringing cloud-delivered cognitive applications and services to market. This will include $100 million available for venture investments to support IBM’s recently launched ecosystem of start-ups and businesses that are building a new class of cognitive apps powered by Watson, in the IBM Watson Developers Cloud.

According to technology research firm Gartner, Inc., smart machines will be the most disruptive change ever brought about by information technology, and can make people more effective, empowering them to do “the impossible.” 1

The IBM Watson Group will have a new headquarters at 51 Astor Place in New York City’s “Silicon Alley” technology hub, leveraging the talents of approximately 2,000 professionals, whose goal is to design, develop and accelerate the adoption of Watson cognitive technologies that transform industries and professions. The new group will tap subject matter experts from IBM’s Research, Services, Software and Systems divisions, as well as industry experts who will identify markets that cognitive computing can disrupt and evolve, such as healthcare, financial services, retail, travel and telecommunications. 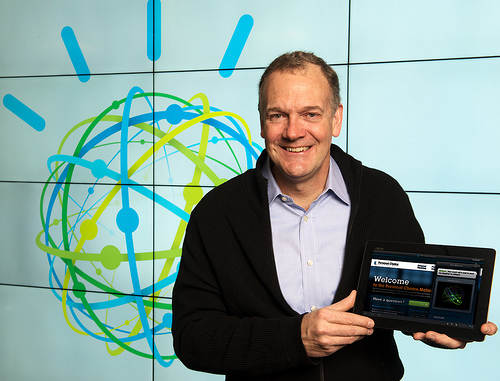 IBM Senior Vice President Mike Rhodin demonstrates a Watson cloud service at IBM Research headquarters in Yorktown Heights, NY, announced on Thurs., January 9, 2014. Mr. Rhodin will lead the IBM Watson Group, a new IBM business unit headquartered in the heart of New York City’s Silicon Alley that will develop products and collaborate with start-ups on cloud-based cognitive apps and services powered by Watson. The IBM Watson Group will focus on R&D and commercialization of software, services and apps that think, improve by learning and discover answers to complex questions by analyzing massive amounts of Big Data. IBM will invest more than $1 billion in the unit, including $100 million in venture investments to support an ecosystem of entrepreneurs developing Watson-powered apps. (Image credit: Jon Simon/Feature Photo Service)

“IBM has transformed Watson from a quiz-show winner, into a commercial cognitive computing breakthrough that is helping businesses engage customers, healthcare organizations personalize patient care, and entrepreneurs build businesses,” said Michael Rhodin, Senior Vice President, IBM Watson Group. “Watson is one of the most significant innovations in IBM’s 100 year history, and one that we want to share with the world.  With these investments we strive to make new markets, reach new buyers and transform industries and professions.”

A major initiative for the IBM Watson Group will be to continue advancing its research and development to accelerate the delivery of cognitive innovations to organizations via the cloud.

As part of this initiative IBM will engineer Watson to be deployed on Softlayer, the cloud computing infrastructure business recently acquired by IBM.

In addition to launching the IBM Watson Group, IBM is announcing three new services based on Watson’s cognitive intelligence.

IBM Watson Discovery Advisor aims to revolutionize how industries such as pharmaceutical and publishing conduct research. Representing a giant leap from existing research tools that churn out thousands of search results their users must wade through, the Watson Discovery Advisor will delve into the influx of data-driven content today’s researchers face, and uncover connections that can speed up and strengthen their work.

IBM Watson Analytics allows users to explore Big Data insights through visual representations, without the need for advanced analytics training. The service removes common impediments in the data discovery process, enabling business users to quickly and independently uncover new insights in their data. Guided by sophisticated analytics and a natural language interface, Watson Analytics automatically prepares the data, surfaces the most important relationships and presents the results in an easy to interpret interactive visual format.

IBM Watson Explorer is designed to help users across the enterprise uncover and share data-driven insights more easily, while helping organizations launch big data initiatives more quickly. Watson Explorer provides users with a unified view displaying all of their data-driven information, as well as a framework for developing information-rich applications that deliver a comprehensive, contextually-relevant view of any topic for business users, data scientists and a variety of targeted business functions.

A Hub for Cognitive Innovation and Exploration

For entrepreneurs and start-ups, the Watson Group’s Silicon Alley headquarters will provide a business incubator offering the technology, tools and talent to create and launch new products and businesses based on Watson’s cloud-delivered cognitive intelligence.As a result, business partners will gain the support to achieve their visions for solving industry and societal challenges, and meeting marketplace demands that are currently unmet.

The Watson Group’s headquarters will also provide a client solutions center, serving as a place for IBM clients to experience cognitive technologies and learn how they can help transform their businesses.In addition, the headquarters will host a design lab for continuously enhancing the user experiences for cognitive applications and services used by IBM clients and partners.

The Watson Group will also offer workshops and seminars on topics such as development skills, as well as networking opportunities. These events will build upon the more than 1,000 academic partnerships that IBM has developed to prepare university students for careers in cognitive computing, big data and analytics. This includes Watson-inspired business and technical challenges, new curriculum, faculty grants and internships.

A Turning Point for Computing and Big Data Discovery

Nearly three years after its triumph on the television quiz show Jeopardy!, IBM has advanced Watson from a game playing innovation into a commercial technology. Now delivered from the cloud and able to power new consumer and enterprise apps, Watson is 24 times faster, smarter with a 2,400 percent improvement in performance, and 90 percent smaller – IBM has shrunk Watson from the size of a master bedroom to three stacked pizza boxes.

IBM has partnered with a range of healthcare organizations to help transform how medicine is practiced, paid for and taught, with the help of Watson-powered solutions. This includes collaborations with Memorial Sloan-Kettering Cancer Center, WellPoint, the University of Texas MD Anderson Cancer Center, and Cleveland Clinic Lerner College of Medicine of Case Western Reserve University.

In May 2013, IBM unveiled the Watson Engagement Advisor, a commercial breakthrough that helps businesses deepen and redefine engagement with customers. Top brands including DBS Bank and Nielsen are exploring how Watson can help them engage customers.

In November 2013, IBM announced it would make Watson available as a development platform in the cloud, enabling software application providers to build a new generation of apps infused with cognitive computing intelligence. This includes the Watson Developers Cloud: a cloud-hosted marketplace where application providers can tap into resources for developing Watson-powered apps, including Watson’s API. Three business partners plan to go to market in 2014 with Watson apps, from Fluid to transform how consumers shop, from MD Buyline to help hospitals procure devices, and Welltok to enable health plans to engage their members.  Currently more than 760 applicants have shared their ideas for creating cognitive apps that redefine how businesses and consumers make decisions.

IBM collaborated with eight universities to develop Watson’s capabilities. Over the past three years, IBM has introduced through its Academic Initiative a range of academic programs to prepare today’s students to become tomorrow’s cognitive computing leaders. This includes Watson-focused case competitions with the University of Connecticut (UConn), University of Rochester and University of Southern California (USC). IBM also works with schools such as Michigan State University and UConn to develop Watson-inspired curriculum, while offering faculty grants to fuel additional coursework. Other academic ventures include the Watson internship program and IBM’s donation of Watson technology to Rensselaer Polytechnic University.