A universal quantum computer uses quantum mechanics to process massive amounts of data and perform computations in powerful new ways not possible with today’s conventional computers. This type of leap forward in computing could one day shorten the time to discovery for life-saving cancer drugs to a fraction of what it is today; unlock new facets of artificial intelligence by vastly accelerating machine learning; or safeguard cloud computing systems to be impregnable from cyber-attack.

Earlier this year, IBM scientists demonstrated critical breakthroughs to detect quantum errors by combining superconducting quantum bits (qubits) in lattices on computer chips – and whose quantum circuit design is the only physical architecture that can scale to larger dimensions. 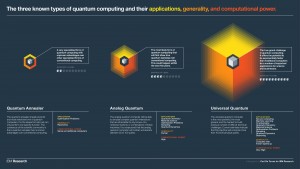 The award is funded under the Logical Qubits (LogiQ) program of IARPA led by Dr. David Moehring. The LogiQ Program seeks to overcome the limitations of current quantum systems by building a logical qubit from a number of imperfect physical qubits.

The workhorse of the quantum computer is the quantum bit. Many scientists are tackling the challenge of building qubits, but quantum information is extremely fragile and requires special techniques to preserve the quantum state. The major hurdles include creating qubits of high quality and packaging them together in a scalable form so they can perform complex calculations in a controllable way – limiting the errors that can result from heat and electromagnetic radiation.

“We are at a turning point where quantum computing is moving beyond theory and experimentation to include engineering and applications,” said Arvind Krishna, senior vice president and director, IBM Research. “Quantum computing promises to deliver exponentially more speed and power not achievable by today’s most powerful computers with the potential to impact business needs on a global scale. Investments and collaboration by government, industry and academia such as this IARPA program are necessary to help overcome some of the challenges towards building a universal quantum computer.”

LogiQ envisions that program success will require a multi-disciplinary approach to come up with new technical solutions that will better deal with the fragility of quantum information due to system imperfections, errors and environmental influences.

Preparing for a quantum future

This award comes on the heels of a three-day conference hosted by IBM Research that brought together some of the leading global thinkers in the field of quantum computing. More than 150 academics, government representatives, industry executives, VCs and scientists gathered at the T. J. Watson Research Center in Yorktown Heights, N.Y. to discuss recent quantum breakthroughs and more importantly, what will be possible with quantum computers built in the next five years.

To read more on key takeaways from the conference, please visit https://ibm.co/1XGYxiu.

Also at the conference, the IBM Center for Applied Insights, in partnership with IBM Research, launched the first quantum business study that lays out recommendations on what can business and academic communities do to prepare for a quantum future. Download the full report here: https://www.ibm.com/ibmcai/quantumcomputing.

For background on the three known types of quantum systems that exist today and in the future, please refer to this infographic: https://flic.kr/s/aHskqDqxbf.

IBM is not disclosing further terms of the LogiQ program award as it is subject to completion of final contract negotiations.