*Blue Gene/Q tackles major challenges of the day, delivers up to 100 petaflops at peak performance*

When it is fully deployed in 2012 at Lawrence Livermore National Laboratory (LLNL), the system, named “Sequoia”, is expected to achieve 20 petaflops at peak performance, marking it as one of the fastest supercomputers in the world. The capabilities this system represents will help ensure United States leadership in high performance computing (HPC) and the science it makes possible. Moreover, Blue Gene/Q is expected to become the world’s most power-efficient computer, churning out 2 gigaflops per watt.

LLNL, a premier multidisciplinary national security laboratory for DOE’s National Nuclear Security Administration (NNSA), applies some of the world’s most powerful supercomputers to maintaining the nation’s aging nuclear deterrent without testing, as well as such challenges as grid and network management, energy research and climate change. IBM will deploy 96 racks beginning as early as December of this year. 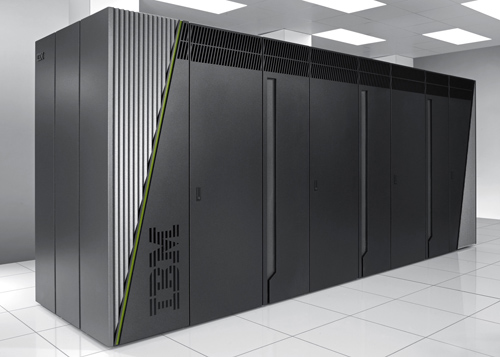 When Blue Gene/Q is fully deployed in 2012 at Lawrence Livermore National Laboratory (LLNL), the system, named “Sequoia”, is expected to achieve 20 petaflops at peak performance, marking it as one of the fastest supercomputers in the world. Image credit: IBM

“It is this emphasis on reliability, scalability and low power consumption that draws the interest of NNSA to this machine and its architecture,” said Bob Meisner, head of NNSA’s Advanced Simulation and Computing program. “This machine will provide an ideal platform to research and develop strategies to assure that our most challenging codes run efficiently on multi-core architectures. Such capabilities will provide tremendous information in formulating our code development strategy as we face the challenges of exascale simulation and advance the state of the art in simulation science, advances necessary to ensure our nation’s security without nuclear testing.”

Announced earlier in 2011, Argonne National Laboratory (ANL) will also implement Blue Gene/Q to stoke economic growth and improve U.S. competitiveness for such challenges as designing electric car batteries, understanding climate change and exploring the evolution of the universe. The 10-petaflop system, named “Mira”, will provide a strong science and technology engine that will fuel national innovation. Argonne is one of the DOE’s oldest and largest labs for science and engineering research, located outside of Chicago.

“At Argonne, we are already exploiting the power of Mira through our Early Science program, which provides a broad range of researchers the opportunity to work with IBM and Argonne technical staff to adapt their codes to Mira’s unique architecture,” said Mike Papka, Deputy Associate Laboratory Director, ANL. “This will ensure that Mira will be prepared to run challenging computational science problems on the first day of operations.”

The third generation in the Blue Gene family of supercomputers, Blue Gene/Q operates at an order of magnitude faster than previous systems, deploying 16 multi-processing core technology and a scalable peak performance up to 100 petaflops—a massive leap forward in parallel computing power. Applicable to a growing set of computationally intensive workloads within the scientific community, Blue Gene/Q is the ideal platform for highly complex projects in a broad range of areas from nuclear energy to climate modeling.

Designed with a small footprint and low power requirements, Blue Gene/Q was ranked as the number-one most energy-efficient supercomputer in the world by the Green500 (June 2011). It provides low latency, high performance runs that simplify tracing errors and tuning performance, all based on an open source and standards-based operating environment.  Engineered with fewer moving parts and built in redundancy, Blue Gene/Q has proven to be a class-leader in reliability. Blue Gene/Q’s combination of high reliability and energy efficiency makes it an economic supercomputing solution, with fewer failures translating to faster times for more sound solutions.

“Completing computationally intensive projects for a wide variety of scientific applications that were previously unsolvable is not just possible – it is now probable,” said Brian Connors, VP of technical computing at IBM. “IBM’s historic role in developing the supercomputers that provide the power behind critical applications across every industry has uniquely positioned us to provide reliable supercomputing at the highest level.”

The new IBM PowerPC® A2 processing architecture plays a key role in delivering performance. Each processor includes 16 compute cores (up from four used with Blue Gene/P, the previous system) plus a core allocated to operating system administrative functions and a redundant spare core.

Blue Gene/Q incorporates architectural advances that contribute to the system’s outstanding performance and help simplify programming. For example, hardware-based speculative execution capabilities facilitate efficient multi-threading for long code sections, even those with potential data dependencies. If conflicts are detected, the hardware can backtrack and redo the work without affecting application performance.

The Road to exascale

A commitment to energy efficiency is essential as IBM continues to point forward towards exascale computing. An exaflop, a million trillion calculations per second, is 1000 times or three orders of magnitude faster than today’s petaflop-class systems. Exascale computing has the potential to address a class of highly complex workloads that have been beyond traditional reach, not just due to their sheer size, but because of their inherent uncertainties and unpredictability – areas such as hurricane prediction and climate modeling. Blue Gene/Q represents the next step in this HPC evolution.

In 2009, President Obama recognized IBM and its Blue Gene family of supercomputers with the National Medal of Technology and Innovation, the most prestigious award in the United States given to leading innovators for technological achievement. IBM, which earned the National Medal of Technology and Innovation on seven other occasions, was the only company recognized with the award in 2009. A pioneering design, Blue Gene held the number one spot on the top 500 list (www.top500.org) of the world’s fastest supercomputers for a record six consecutive times.

IBM continues to innovate and be a leader in Technical Computing, extending the capabilities of its server and cluster systems while introducing new solutions and business models to address the supercomputing challenges of today.