Roads may close, traffic patterns may change, leading to travel delays that could impact lives and exacerbate public safety.

And yet researchers, policy makers and government officials have long relied on a static model to map hurricanes and chart evacuation zones, particularly when it comes to timing and decision-making.

Funded by a $3 million Science, Engineering and Education for Sustainability grant from the National Science Foundation, two University of Delaware faculty members are creating a fundamentally new approach to modeling hurricanes.

In a truly collaborative project, Rachel Davidson, professor of civil engineering, will work with co-principal investigators at other institutions to integrate a set of hurricane scenarios into an engineering model to support evacuation decisions. 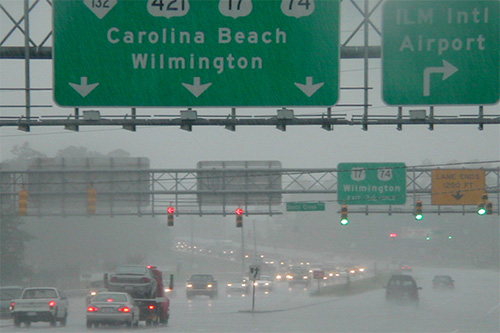 UD researchers are part of a team helping create a fundamentally new approach to modeling hurricanes and supporting the evacuation decision-making process. Photos courtesy of Dave Gatley/FEMA News and NOAA

The integrated model will allow the team to track how the hurricane moves and will create storm surge, wind speed and flooding maps that can be interchanged and overlapped. This dynamic new model would offer a more accurate picture of when and where evacuation orders should be issued, as well as the potential impact on viable evacuation routes and shelter options.

Tricia Wachtendorf, associate professor of sociology, will meanwhile examine the decisions people maker over the duration of a hurricane — and specifically, at what points during a storm — the information generated from Davidson’s model would be most useful to the “end users,” such as residents, emergency responders and government officials.

Together, Wachtendorf and Davidson, along with colleagues from the University of North Carolina-Chapel Hill, Cornell University, University of Oklahoma and Stony Brook University, hope to develop a new paradigm for understanding and managing how people make decisions as a storm progresses.

“What are the time markers that are important? When do we issue warnings?” asks Wachtendorf, associate director of the Disaster Research Center (DRC). “How much time do emergency responders need to review data before meeting with government officials, and when do they push that information out to the public?” 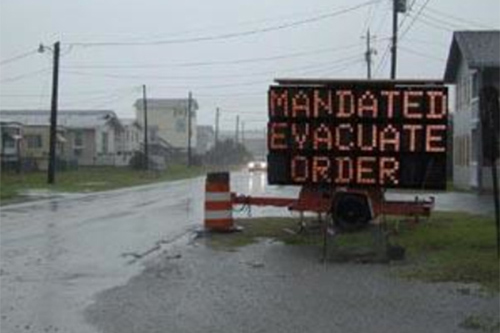 UD researchers are part of a team helping create a fundamentally new approach to modeling hurricanes and supporting the evacuation decision-making process. Photos courtesy of Dave Gatley/FEMA News and NOAA

To better answer these questions, Wachtendorf anticipates that a hurricane during summer or fall 2014 will allow her and her graduate students the opportunity to conduct in-field observations, face-to-face interviews, and focus groups with emergency responders and decision makers.

“This project is a leap forward in understanding and improving management of evacuation and shelter for hurricanes,” says Davidson. “To the extent that can be done, we hope to reduce deaths, injuries and unnecessary expenses associated with ill-planned or ill-executed emergency response in the future.”

This work builds off the team’s previous hurricane evacuation work, as well as the DRC’s storied history in disaster research.

“A growing concern is that future hurricanes might be more devastating than our experience to date, due to growing coastal populations, limited road capacity and climate change,” says Davidson.

The novel modeling concepts under development may also apply to other natural hazards, including inland flooding, wildfires and ice storms.

“The results could have far-reaching effects on how society responds to natural hazards,” Davidson says.

Rachel Davidson joined UD in 2007. She is a professor in the Department of Civil and Environmental Engineering and a core faculty member in UD’s Disaster Research Center. She conducts research on natural disaster risk modeling and civil infrastructure systems with a focus on regional risk and lifeline risk. She has modeled earthquakes, hurricanes, urban fire and ice storm risk, both to better characterize risk and to identify effective risk management decisions.

Tricia Wachtendorf is an associate professor of sociology and associate director of the University’s Disaster Research Center. A specialist in the coordination between organizations in disasters, her work includes field research conducted in the aftermath of several notable disasters, including tsunamis in Japan and the Indian Ocean, Hurricane Katrina and the 9/11 terrorist attacks.