How math could make bones stronger

They may seem rigid and set in their ways, but your bones are actually under constant construction and deconstruction. They give up their nutrient treasures (calcium) to the body and then rebuild in a constant give-and-take sort of rhythm.

When that rhythm shifts with advancing age or the onset of osteoporosis, the rebuilding process decreases. Bones lose density and strength and become more prone to fracture.

More than 10 million people in the United States live with osteoporosis and the resulting fractures demand more than $17 billion in related health care each year.

Now two University of Delaware researchers and their students have joined forces – applying the mathematical modeling expertise of one to the biological inquiry of the other – to point the way to a promising remedy.

The biologist – Anja Nohe – has shown that treating a mouse with a peptide known as CK2.3 increases bone mineral density. The mathematician/engineer – Prasad Dhurjati – has calculated estimated dosages for human beings.

According to their model, injections of CK2.3 can raise bone mineral density of bones badly degraded by osteoporosis back to healthy levels. 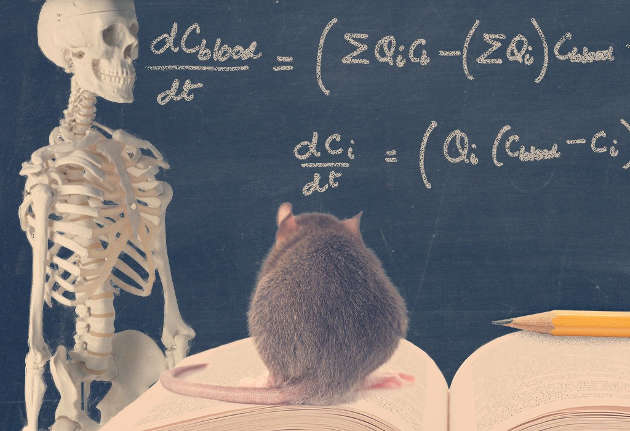 Their work has just been published in Pharmacometrics and Systems Pharmacology.

Dhurjati has published mathematical models for many different systems. The professor of chemical and biomolecular engineering (with a joint appointment in mathematical sciences and biological sciences) has 40 years of research experience and is an often-cited author.

Models can be of many different kinds — conceptual models, simple pictorial connection maps, a set of rules or a complex set of mathematical equations. Dhurjati looks at various types to make sense of the time-varying interactions between variables in the entire system. This allows for meaningful analysis of the enormous amount of data researchers are generating in almost every field.

“My focus is on converting data to knowledge using models,” he said. “I want more students to work in this domain.”

High-speed computers are sophisticated tools that are made more valuable with good models, he said. Reliable models based on good data can save time, money and many laboratory animals.

In this case, the work included students from four departments – Chemical and Biomolecular Engineering, Biological Sciences, Mathematical Sciences and Biomedical Engineering — some at graduate-level study, some undergraduate.

Dhurjati’s team used that information to calculate ideal dosages for healthy humans and those with osteoporosis.

A mouse and a human are different in many ways, Dhurjati said, so calculating a dosage is more complex than just adjusting for differences in weight, for example.

Dhurjati developed part of the model using the concepts in physiology-based pharmacokinetic (PBPK) models pioneered by the late Kenneth Bischoff, UD professor of chemical engineering for many years. Such models can be used to calculate how a pharmaceutical molecule distributes in different parts of the body.

In this case, Dhurjati needed to know what the local concentration of CK2.3 would be at the site where bone is formed. Once this was determined, another math model was used to calculate bone mineral density.

These considerations prevent a proposed remedy from becoming a toxin, and the model can address such questions as how much to take, how often, whether it should be taken by mouth or injection and how to adjust for age, gender, ethnicity, height, weight, overall health.

The collaboration between Nohe and Dhurjati has been underway for some time and has produced other insights into biological questions.

“She’s a believer in models,” he said. “These are two different cultures. Biology emphasizes qualitative details, and engineering relies more on mathematical models. But if the two cultures can communicate, that brings new ways of looking at the same problem.”

The study was supported by a grant from the National Institutes of Health.

Prasad Dhurjati is a professor of chemical and biomolecular engineering with a joint appointment in mathematical sciences and biological sciences. His research interests are in systems medicine, systems biology, chemical process diagnostics and artificial intelligence. He earned his bachelor’s degree in chemical engineering at the Indian Institute of Technology in Kanpur, India, and his doctorate at Purdue University. He is an elected fellow of the American Institute of Medical and Biological Engineering. He also is president of the UD Faculty Senate.

Anja Nohe is associate professor of biological sciences, with interest in differentiation of stem cells, development of new imaging techniques and new delivery techniques into the cell nucleus. She earned her undergraduate degree at the University of Würzburg, Germany, and her doctorate at Theodor Boveri Institute at the same university. She did postdoctoral work at the University of Western Ontario in Canada.