Ion bombardment of metal surfaces is an important, but poorly understood, nanomanufacturing technique. New research using sophisticated supercomputer simulations has shown what goes on in trillionths of a second. The advance could lead to better ways to predict the phenomenon and more uses of the technique to make new nanoscale products.

PROVIDENCE, R.I. [Brown University] — To modify a metal surface at the scale of atoms and molecules — for instance to refine the wiring in computer chips or the reflective silver in optical components — manufacturers shower it with ions. While the process may seem high-tech and precise, the technique has been limited by the lack of understanding of the underlying physics. In a new study, Brown University engineers modeled noble gas ion bombardments with unprecedented richness, providing long-sought insights into how it works.

“Surface patterns and stresses caused by ion beam bombardments have been extensively studied experimentally but could not be predicted accurately so far,” said Kyung-Suk Kim, professor of engineering at Brown and co-author of the study published May 23 in the Proceedings of the Royal Society A. “The new discovery is expected to provide predictive design capability for controlling the surface patterns and stresses in nanotechnology products.”

The improved understanding could open the door to new technologies, Kim said, such as new approaches to make flexible electronics, biocompatible surfaces for medical devices, and more damage-tolerant and radiation-resistant surfaces. The research applies to so-called “FCC” metals such as copper, silver, gold, nickel, and aluminum. Those metals are crystals made up of cubic arrangements of atoms with one at each corner and one in each cube-face center. 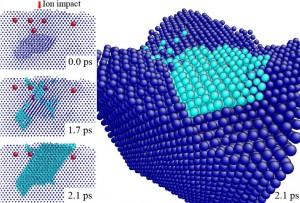 Three new mechanisms at the nanoscale. A computer-model image of an island of metal atoms formed after bombardment by noble gas ions. Atoms disturbed by the bombardment cluster together under the surface and then glide back up in a matter of 2.1 trillionths of a second, or picoseconds (ps). Image credit: Kim Lab/Brown University

Scientists have been trying to explain the complicated process for decades, and more recently they have begun to try modeling it on computers. Kim said the analysis of the Brown team, including lead author and postdoctoral scholar Sang-Pil Kim, was more sophisticated than previous attempts that focused on a single bombardment event and only isolated point defects within the metal substrate.

“In this work, for the first time, we investigate collective behavior of those defects during ion bombardments in terms of ion-substrate combinations,” Kyung-Suk Kim said.

The new model revealed how ion bombardments can set three main mechanisms into motion in a matter of trillionths of a second. The researchers dubbed the mechanisms “dual layer formation,” “subway-glide mode growth,” and “adatom island eruption.” They are a consequence of how the incoming ions melt the metal and then how it resolidifies with the ions occasionally trapped inside.

When ions hit the metal surface, they penetrate it, knocking away nearby atoms like billiard balls in a process that is akin, at the atomic level, to melting. But rather than merely rolling away, the atoms are more like magnetic billiard balls in that they come back together, or resolidify, albeit in a different order.

Some atoms have been shifted out of place. There are some vacancies in the crystal nearer to the surface, and the atoms there pull together across the empty space, that creates a layer with more tension. Beneath that is a layer with more atoms that have been knocked into it. That crowding of atoms creates compression. Hence there are now two layers with different levels of compression and tension.This “dual layer formation” is the precursor to the “subway-glide mode growth” and “adatom island eruption”.

A hallmark of materials that have been bombarded with ions is that they sometimes produce a pattern of material that seems to have popped up out of the original surface. Previously, Kyung-Suk Kim said, scientists thought displaced atoms would individually just bob back up to the surface like fish killed in an underwater explosion. But what the team’s models show is that these molecular islands are formed by whole clusters of displaced atoms that bond together and appear to glide back up to the surface.

“The process is analogous to people getting on a subway train at suburban stations, and they all come out together to the surface once the train arrives at a downtown station during the morning rush hour,” Kyung-Suk Kim said.

The mechanisms, while offering a new explanation for the effects of ion bombardment, are just the beginning of this research.

“As a next step, I will develop prediction models for nanopattern evolution during ion bombardment which can guide the nanomanufacturing processes,” Sang-Pil Kim said. “This research will also be expanded to other applications such as soft- or hard-materials under extreme conditions.”

In addition to Kyung-Suk Kim and Sang-Pil Kim, other authors include Huck Beng Chew, Eric Chason and Vivek Shenoy.