How Do Phytoplankton Survive Scarcity of a Critical Nutrient?

Phytoplankton—tiny, photosynthetic organisms—are essential to life on Earth, supplying us with roughly half the oxygen we breathe.  Like all other life forms, phytoplankton require the element phosphorus to carry out critical cellular activity, but in some parts of the world’s ocean, P is in limited supply. How do phytoplankton survive when phosphorus is difficult to find?

Phytoplankton can alter their biochemical make-up according to the availability of nutrients in the water. When phosphorus (P) is particularly abundant in the water, phytoplankton produce and store a form of P called polyphosphate, or poly-P, to use later during times when P is less abundant. The accepted wisdom has been that poly-P was would be found stored by micro-organisms in waters where P was abundant and would be scarce in waters depleted of P. But when a group of researchers from the Woods Hole Oceanographic Institution (WHOI) and the Bigelow Laboratory for Ocean Sciences tested that notion, conducting the most comprehensive survey of poly-P content and distribution in the western North Atlantic, what they found was surprising.

Rather than finding low levels of poly-P in the phytoplankton in the Sargasso Sea where P is scarce, they found the phytoplankton were enriched with poly-P when compared to those in the nutrient rich waters in the western North Atlantic – the opposite of what they had expected. They also found that in low-P environments, poly-P was more readily recycled from sinking particles, retaining it in shallower waters where phytoplankton live and making it available for their use. 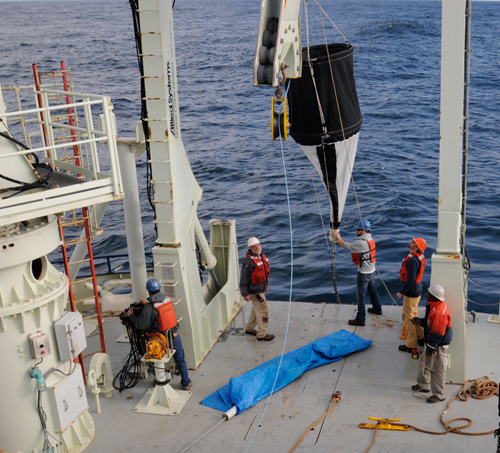 To conduct their work, the scientists collected water samples at different depths of the ocean during two cruises from the relatively nutrient-rich waters off Woods Hole to the phosphorus-starved subtropical Sargasso Sea near Bermuda in 2008 and 2012. Pictured here are corresponding author WHOI Associate Scientist Benjamin Van Mooy (orange helmet) and research assistant Justin Ossolinski (blue helmet) working with crew members of the R/V Knorr to deploy a sediment net-trap used in the study. (Photo by Suni Shah, Woods Hole Oceanographic Institution)

“We’ve know that Poly-P existed in phytoplankton for a very long time.  The conventional wisdom that phytoplankton made more Poly-P when they had more phosphorus just made so much intuitive sense that few people have worked on this molecule,” said WHOI marine chemist Ben Van Mooy, the corresponding author on the study.  “However, there were a few hints in the literature that the whole story on poly-P was not completely wrapped up.  We certainly didn’t set out thinking that we might upend current thinking, and it took us a long time before we would believe our own results.  I think the larger message from fundamental discoveries like this is that we have so much more to learn about phosphorous and how phytoplankton deal with its scarcity in certain regions of the sea.  Hopefully this paper will be a launching point for a lot of exciting science.” 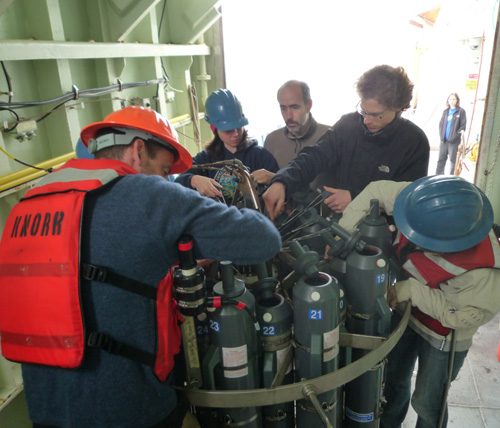 The study, “Accumulation and enhanced cycling of polyphosphate by Sargasso Sea plankton in response to low phosphorus,” was recently published in the Proceedings of the National Academy of Sciences (PNAS).

The work was supported by a Doherty Postdoctoral Scholarship and the National Science Foundation.