How did a third radiation belt appear in the Earth’s upper atmosphere?

However, in February of this year, a team of scientists reported in the journal Science the surprising discovery of a previously unknown third radiation ring. This narrow ring had briefly circled the Earth between the inner and outer rings in September 2012 and then almost completely disappeared.

How did this temporary radiation belt appear and dissipate? 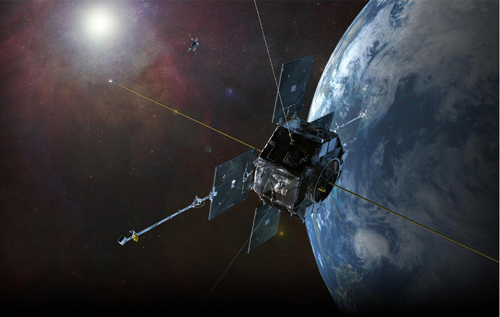 In new research, the radiation belt group in the UCLA Department of Atmospheric and Oceanic Sciences explains the development of this third belt and its decay over a period of slightly more than four weeks. The research is available in the online edition of the journal Geophysical Research Letters and will be published in an upcoming print edition.

By performing a “quantitative treatment of the scattering of relativistic electrons by electromagnetic whistler-mode waves inside the dense plasmasphere,” the investigators were able to account for the “distinctively slow decay of the injected relativistic electron flux” and demonstrate why this unusual third radiation belt is observed only at energies above 2 mega-electron-volts.

Understanding the processes that control the formation and ultimate loss of such relativistic electrons is a primary science objective of the NASA Van Allen Probe Mission and has important practical applications, because the enormous amounts of radiation the Van Allen belts generate can pose a significant hazard to satellites and spacecraft, as well to astronauts performing activities outside a spacecraft.

The current research was funded by the NASA, which launched the twin Van Allen probes in the summer of 2012.

The lead author of the research is Richard Thorne, a UCLA professor of atmospheric and oceanic sciences, who was a co-author of the Feb. 28 research paper in Science. Co-authors of the new research include Wen Li, a graduate student who works in Thorne’s laboratory; Binbin Ni, a postdoctoral scholar who works in Thorne’s laboratory; Jacob Bortnik, a researcher with the UCLA Department of Atmospheric and Oceanic Sciences; Daniel Baker, a professor at the University of Colorado’s Laboratory for Atmospheric and Space Physics and lead author of the February Science paper; and Vassilis Angelopoulos, a UCLA professor of Earth and space sciences.