It’s one of the most enduring legends in race car history.

After a business relationship between auto titans Henry Ford II and Enzo Ferrari soured in the early 1960s, Ford set a single-minded goal — to create a car that would beat Ferrari at the 24 Hours of Le Mans, one of the world’s most prestigious auto races. The result was the Ford GT40, a slick beauty that dominated Le Mans in 1966, taking the three top spots and winning the next three consecutive years as well.

Michael Bodell, deputy director of the Petersen Automotive Museum in Los Angeles, was looking to tell the story of the GT40 in a fresh way. Launched in 1994, the museum reopened in December 2015 after a $90 million renovation that provided the infrastructure needed to support technology for better storytelling. When he learned about Microsoft HoloLens, the first self-contained holographic computer, Bodell knew he’d found the right technology to create a rich, immersive experience.

“We wanted to design an exhibition around the device, because people want to touch cars,” Bodell says. “They want to interact with them. They want to hear the engine. And unfortunately, because these cars are really priceless pieces of art, kinetic art, they can’t. But through a device like HoloLens, they can.” 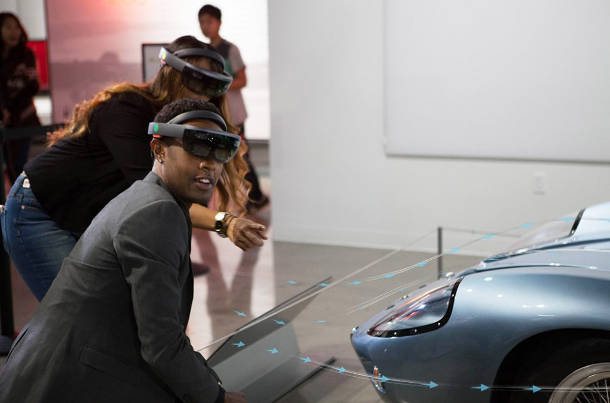 The exhibit will be on display through September 2018. Image credit: Billy Small

The museum’s “An American Supercar” exhibit, which will be on display at the Los Angeles Auto Show Dec. 1 through 10 and at the museum through September 2018, features a 1967 GT40 Mark III alongside a 2017 Ford GT. The HoloLens experience takes viewers on a multidimensional journey through the storied car’s history, which began when Ford’s attempts to purchase Ferrari fell through because Ferrari wanted to hang onto the race car side of the business. An angry Ford vowed to get his revenge at the racetrack.

The four-minute experience starts with a wall behind the exhibit crumbling to reveal the Le Mans racetrack. Several versions of the GT40 are shown, then attention shifts to the new GT. As the car seems to speed down a roadway, its tires spinning, viewers learn about the GT’s aerodynamic design and see it rising and lowering in different drive modes. A narrator details specifications of the two cars’ engines, which appear to float in the air. Then the walls again fall away and the scene shifts back to the racetrack, with both cars speeding off into the distance, engines revving.

Ford engineers and designers are now using HoloLens to model changes to car designs, which speeds up the development process and reduces the need for manual updates to physical models that can take days or weeks. Henry Ford III — whose grandfather, Henry Ford II, had the infamous feud with Ferrari — says the exhibit provides a unique way to learn about the cars’ designs.

“To be able to view these cars through the HoloLens, and to be able to really get up close and personal to the inner workings of the cars, I think you really learn to appreciate all the engineering and design work that goes into developing cars like these,” he says. “You don’t oftentimes get to see these two cars next to each other, the bookends of the GT story. To be able to see them here is an amazing experience.”

“One of the limitations of museums is that curators are only one person that’s able to tell a story. HoloLens allows museums to scale themselves a little bit and use the technology as a platform for storytelling,” he says. “It’s a technology and a platform that museums can use to tell even better stories, more immersive stories.”

And HoloLens is so easy to use that it can appeal to people young and old, tech-savvy or less so, Fonda says.

“I think what’s most interesting about it is that people can be sort of stunned by the technology, but then when they put it on, it just makes sense. It’s incredibly user-friendly.”

The experience was created by Zengalt, a mixed-reality application developer based in Bellevue, Washington, in collaboration with the museum, Ford Performance group and Microsoft. Working with Ford archival files and real objects, the Zengalt team used museum floor plans and photos to recreate the exhibit space in holographic form. Spatial mapping, which makes holograms look integrated with the surrounding environment, and spatial sound, which simulates 3D sound, create a realistic effect. The experience was built with the help of Zengalt’s Vyzn platform, which allows 3D developers to create their own experiences without having to write any code.

Zengalt CEO Ivan Evdokimov says after seeing a HoloLens at the 2015 Microsoft Build conference, he immediately recognized the technology’s vast potential for presenting three-dimensional content across a range of settings.

“This device is going to change everything,” Evdokimov says. “It allows you to add 3D objects on top of the real world. That means you can replace any object, any kind of display. We’re not only talking about PCs and mobile phones, we’re also talking about road signs and any kind of displays, basically. I’m pretty sure that because of this technology, the world is going to look completely different in ten years.”

Billy Watenpaugh, director of business development for Zengalt, says HoloLens is particularly suited for museums, which are limited by space constraints and other challenges.

“There’s a number of reasons why museums may not be able to show some of the things they want to. They might not have enough space, or the objects might be difficult to move or difficult to see,” he says. “With HoloLens, we can bring those hidden artifacts out from their archives and bring them to life, creating a more immersive, interesting and interactive story for guests.”

Since its 2016 release, HoloLens has been used for a growing range of applications, from interactive textbooks for high school students to architecture firms using the mixed-reality device to visualize buildings in 3D. The Petersen project, Fonda says, highlights HoloLens’s potential for software developers.

“It proves that HoloLens is not just a bleeding-edge technology, but one that has commercial applications,” he says. “From a developer perspective, it makes it a more approachable technology and shows that there are applications for developers out there.”

“An American Supercar” had its soft launch at the museum in October, and Bodell says audiences have been impressed by how realistic the experience is. He sees the technology as a game-changer for museums as they look for ways to draw in younger audiences.

“Museums need to look ahead at the next generation and how they’re interacting with what they want to learn about and with each other, and they interact through technology,” Bodell says. “The next generation really does want experiences. And the way to create experiences that are immersive and compelling is through a device like this.”

“If we wanted to have an exhibit in the future of cars that no longer exist — there’s no examples of them, there’s no replicas of them, but they still have a story that we’d like to tell — we can bring them back to life through this device,” he says. “We can place them contextually in an exhibit with objects that do exist, so we’re essentially curating our space with both physical and digital assets.

“That’s something that museums should really latch onto, and it might end up redefining what museums are,” Bodell says. “Essentially, you could walk into an empty room, but if you’ve got this device on, it’s a well-curated exhibition.”