When it comes to influential positions in the entertainment industry, minorities and women are represented at rates far below what would be expected given their percentage of the general population, according to a new study done at UCLA’s Ralph J. Bunche Center for African American Studies.

In fact, the report shows, the proportion of female and minority actors, writers, directors and producers in films and TV ranges from just one-twelfth to one-half of their actual population percentage.

“The report paints a picture of an industry that is woefully out of touch with an emerging America, an America that’s becoming more diverse by the day,” said lead author Darnell Hunt, the center’s director.

The underrepresentation is especially noteworthy because the study found that greater diversity in TV and film productions actually increases viewers, resulting in higher profits for studios and networks.

“Hollywood does pretty well financially right now, but it could do a lot better if it were better reflecting the diversity of America,” said Hunt, who is also a professor of sociology in UCLA’s College of Letters and Science. 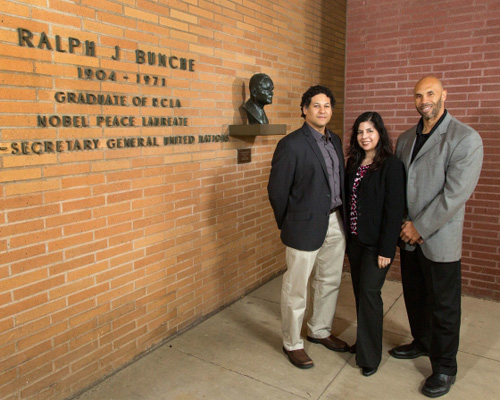 The UCLA analysis focused on the top 172 American-made movies from 2011 and more than 1,000 television shows that aired on 68 cable and broadcast networks during the 2011–12 season. Researchers looked at the level of diversity both in front of and behind the camera, on the rosters of Hollywood’s most prominent talent agencies, and among the winners of such industry accolades as the Academy and Emmy awards.

The study, “2014 Hollywood Diversity Report: Making Sense of the Disconnect,” is believed to be the largest and most comprehensive look to date at diversity in the entertainment industry. It is part of a series of analyses that will be done for the Bunche Center’s Hollywood Advancement Project, which will track over time whether the TV-and-film industry is employing diverse groups of lead actors, writers, directors and producers and whether major talent agencies are representing them. The study also will identify best practices for widening the pipeline for underrepresented groups.

“Underrepresentation in Hollywood is not a surprise to anyone,” said Ana-Christina Ramon, co-author of the study and the center’s assistant director. “What’s different is we’re actually documenting the degree to which the problem is occurring in all these different arenas, and we’re showing how diversity affects the bottom line. Moreover, we’re going to document these trends over time so we can trace any changes.”

Problems on both sides of the camera

The study found that minorities were featured in starring film and TV roles far less often than would be expected given their share of the overall U.S. population, which stands at just more than 36 percent.

As lead actors in films, they were underrepresented by a factor of more than three-to-one — that is, they appeared as leads at less than one-third the rate that would be expected based on their proportion of the population.

They fared a little better in all forms of entertainment (not including sports) on cable television and in reality programming on broadcast TV, appearing as leads at about half the expected rate. But the situation was worse in broadcast TV comedies and dramas, where they were underrepresented by a factor of seven-to-one, the study found.

Women enjoyed proportionate representation in just one category: On broadcast TV, they appeared as leading actors in about 52 percent of comedies and dramas in 2011–12. But they fared worse elsewhere. In fact, in the study’s single greatest example of disparity, women were underrepresented by a factor of 12-to-one as film directors. As film writers, they were underrepresented by a factor of three-to-one. In the other film and TV categories, they were represented at only 50 percent to 70 percent the expected rate.

Talent agencies: Not representing the underrepresented

“There are certain major projects that you just don’t get to be part of unless you have a connection with one of these top agencies,” Ramon said. “Or maybe you get to be a part of it, but you’re not going to be the lead. So the tendency of top agencies to pack their talent rosters with whites really restricts access to opportunities for underrepresented groups.”

Oscars and Emmys: An absence of accolades

Industry awards proved no better at reflecting diversity. No minority-directed film from 2011 won an Oscar, and no film with a minority lead actor won an Oscar, the study shows. More than 90 percent of the Oscar-winning films in 2011 had male directors, and more than 80 percent of Oscar-winning films featured male leads. Exceptions included “The Help” and “The Iron Lady.”

The situation was only slightly better with TV awards. Only 5 percent of Emmy-winning comedies and dramas on broadcast TV in 2011–12 were minority-created, and a single show — “Grey’s Anatomy” — accounted for that entire share. (The show’s creator is Shonda Rhimes, an industry whiz who happens to be African-American.) On cable TV, no minority-created comedies or dramas won Emmy awards.

The lack of diversity can perpetuate stereotypes and misunderstandings among the races and genders, the authors warned. It can also affect Hollywood’s bottom line. Previous research by the center determined that more TV viewers were drawn to shows with ethnically diverse casts and writers, while shows with less diversity in their credits attracted smaller audiences.

The findings come at a time of increasing diversity in the U.S., with minorities actually outpacing whites as consumers of entertainment. Even though minorities account for 36.3 percent of the overall U.S. population, they represent 44.1 percent of frequent moviegoers and tend to watch more hours of television each week than white viewers. Meanwhile, California is expected to become a majority–minority state this year, and forecasts predict the entire nation will follow by 2042.

“The situation is better than it was in the 1950s, but Hollywood is falling further and further behind,” Hunt said. “America is infinitely more diverse than it was. So the gap has gotten bigger between where America is going and where the industry is going.”

Hunt is the author of the “Hollywood Writers Report,” an ongoing analysis for the Writers Guild of America focusing on employment, access and earnings among television and film writers. He was also the principal investigator on “The African American Television Report,” released by the Screen Actors Guild in 2000. In 1993, he served as a media researcher for the U.S. Commission on Civil Rights hearings on diversity in Hollywood.

Zachary Price, the holder of a recent doctorate in theater from UC Santa Barbara, worked on the project, as did four UCLA graduate students. Support for this report was provided by the Bunche Center’s Hollywood Advancement Project.