Hold the Phone for Vital Signs

*WPI researchers turn a smart phone into a medical monitor*

An iPhone app that measures the user’s heart rate is not only a popular feature with consumers, but it sparked an idea for a Worcester Polytechnic Institute (WPI) researcher who is now turning smart phones, and eventually tablet devices, into sophisticated medical monitors able to capture and transmit vital physiological data.

A team led by Ki Chon, professor and head of biomedical engineering at WPI, has developed a smart phone application that can measure not only heart rate, but also heart rhythm, respiration rate and blood oxygen saturation using the phone’s built-in video camera. The new app yields vital signs as accurate as standard medical monitors now in clinical use. Details of the new technology are reported in the paper “Physiological Parameter Monitoring from Optical Recordings with a Mobile Phone,” published online, in advance of print, by the journal IEEE Transactions on Biomedical Engineering. 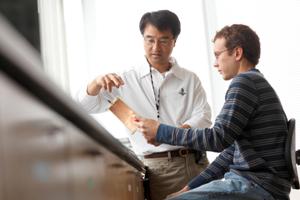 “This gives a patient the ability to carry an accurate physiological monitor anywhere, without additional hardware beyond what’s already included in many consumer mobile phones,” the authors write. “One of the advantages of mobile phone monitoring is that it allows patients to make baseline measurements at any time, building a database that could allow for improved detection of disease states.”

The application, developed by Chon and WPI colleagues Yitzhak Mendelson, associate professor of biomedical engineering, Domhnull Granquist-Fraser, assistant professor of biomedical engineering, and doctoral student Christopher Scully, analyzes video clips recorded while the patient’s fingertip is pressed against the lens of the phone’s camera. As the camera’s light penetrates the skin, it reflects off of pulsing blood in the finger; the application is able to correlate subtle shifts in the color of the reflected light with changes in the patient’s vital signs. Chon, who is an expert on signal processing, has previously developed algorithms that monitor a range of vital signs using traditional clinical devices like a Holter heart monitor. In the new study, Chon and his team created and adapted algorithms to process the data gathered by the phone’s video camera.

To test for accuracy, volunteers at WPI donned the standard monitoring devices now in clinical use for measuring respiration, pulse rate, heart rhythm, and blood oxygen content. Simultaneously, the volunteers pressed a finger onto the camera of a Motorola Droid phone. While all devices were recording, the volunteers went through a series of breathing exercises while their vital signs were captured. Subsequent analysis of the data showed that Chon’s new smart phone monitor was as accurate as the traditional devices. While this study was done on a Droid, Chon said the technology is easily adaptable to most smart phones with an embedded video camera.

Furthermore, since the new technology can measure heart rhythm, Chon believes the smart-phone app could be used to detect atrial fibrillation (AF), which is the most common form of cardiac arrhythmia. “We are building that application now, and we have started a preliminary clinical study with colleagues at UMass Medical School to use the smart phone to detect AF,” Chon said.

Chon and colleagues are also at work developing a version of the mobile monitoring technology for use on video-equipped tablets like the iPad. A patent application for the technology has been filed. “Imagine a technician in a nursing home who is able to go into a patient’s room, place the patient’s finger on the camera of a tablet, and in that one step capture all their vital signs,” Chon said. “We believe there are many applications for this technology, to help patients monitor themselves, and to help clinicians care for their patients.”

The application, now in the final development and clinical testing phase, is not yet available for the public.