Rebecca Davis, assistant professor of history at the University of Delaware, has received a Religious History Award from the Lesbian, Gay, Bisexual and Transgender Religious Archives Network for her essay titled “‘My Homosexuality Is Getting Worse Every Day’: Norman Vincent Peale, Psychiatry, and the Liberal Protestant Response to Same-Sex Desires in Mid-Twentieth-Century America.”

Norman Vincent Peale, to whom the title refers, was famous for his self-help book The Power of Positive Thinking. As a renowned Protestant minister, he encouraged people to heal themselves through prayer and believed heterosexual marriage was essential to personal happiness.

Davis said she began her essay after she found two folders of letters to Peale written by young men and women who sought his advice about homosexuality. 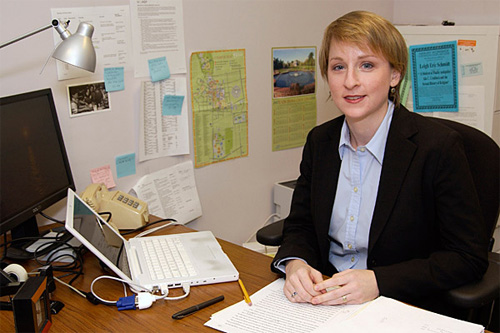 “Given that the 1950s was a time of tremendous public hostility toward homosexuality and great enthusiasm for marriage, I was moved by their expressions of pain and confusion about same-sex desires, and I was fascinated that they believed that Peale could provide them with answers,” Davis said. “That curiosity prompted me to read further into Peale’s published advice columns, and to place his advice in a broader historical context.”

Because Peale placed such a high premium on marriage, in one published advice column for Look, a popular national family magazine, he recommended that a gay man seek clinical treatment for his sexuality. The letters Davis discovered were written in response to that advice column.

While most of today’s mainstream mental health professionals condemn therapy as a means to “cure” or “treat” homosexuality, Davis’ research reveals that during the 1950s religious figures, including Peale, played a significant role in shaping the public’s understanding of homosexuality.

Davis’ essay was commissioned for a collection of essays titled American Christianities: A History of Dominance and Diversity published in 2011. Davis has completed prior work on the history of marriage counseling, including a book More Perfect Unions: The American Search for Marital Bliss.

Davis will be receiving the award and speaking about her research at the annual LGBT-RAN dinner on Saturday, June 15, at the Pacific School of Religion in Berkeley, Calif. The dinner is open to the public and more information can be found at www.lgbtran.org.