REDMOND – Feb. 21, 2011 – While visiting a government office in Vietnam nearly a decade ago, a Microsoft employee noticed one of the employees had Post-It® notes all the way around her computer monitor.

The notes weren’t daily “to-dos” or grocery lists, but English-to-Vietnamese translations of common Microsoft Windows and Office commands such as “file,” “save” and “print.” At the time, there was no Microsoft software available in Vietnamese.

“It dawned on us that our user experience could be localized even more in order to make our technology more available, and the Microsoft Local Language Program was born,” said Lauren Woodman, general manager of Microsoft’s Worldwide Education and Government programs.

Full versions of Microsoft Windows, Office and Visual Studio are available in more than 35 languages, but with more than 6,000 languages spoken around the globe, millions miss out on the opportunity to use technology in their own without help, Woodman said. 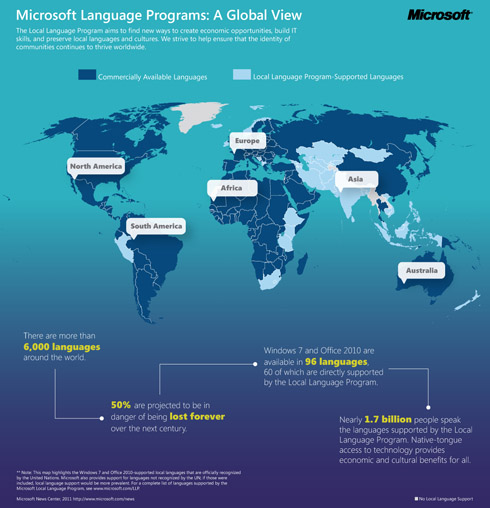 Mother Language Day Infographic. Microsoft Windows 7 and Microsoft Office 2010 are now available in 96 languages, 60 of which are supported by the Local Language Program. Image credit: Microsoft

With that in mind, in 2004 Microsoft developed a Local Language Program to develop tools that would allow speakers to use Microsoft software in their own languages, eliminating the need for the government worker to use Post-Its to get her work done.

It’s a noteworthy day at Microsoft, where each year the Local Language Program works to expand and improve the way it brings technology to people in their own language or dialect, Woodman said.

How It Works: LIPs and Localization

Since the company began building Language Interface Packs (LIPs) nearly a decade ago, 1.7 billion more people have used Microsoft products in their own language. Vietnamese, the language on the Post-Its that inspired the Local Language Program, is now the most frequently downloaded language pack.

A LIP is a free download that will add a language layer to a genuine version of Windows, Office or Visual Studio, Woodman said. It provides a roughly 80 percent localized experience by presenting the user interface – commands, dialogue boxes and more – in the user’s native language.

“All of a sudden this door is open to someone to use technology in their native language,” Woodman said. “It’s pretty amazing to watch people light up when they see technology in their language, which in a lot of countries is not that accessible to folks. Then it becomes the very personal and intimate experience with technology that we are all used to.” 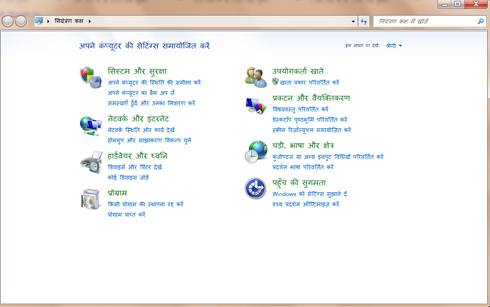 The Microsoft Local Language Program extends the 35-language reach of Windows 7, Office 2010 and Visual Studio by offering free downloadable translation packs for languages and dialects such as Hindi (above), Maori and Vietnamese. Image credit: Microsoft

The addition of each language and dialect brings with it the stories of people and cultures, many of whom are struggling to preserve their heritage and language. Hurd said that a video case study for the Māori language in New Zealand is one of her favorite examples.

In New Zealand, 15 percent of the population is Māori, or indigenous Polynesian, yet only about a quarter of the Māori people speak their native language.

“The Māori language is in decline, and people realized they had to do something to preserve their language. When the opportunity to translate our products into Māori came up, they jumped on the opportunity,” Hurd said.

In an increasingly high-tech world, languages must be spoken outside the home, said Te Taka Keegan, a senior lecturer at the University of Waikato in Hamilton, New Zealand. He spoke as part of a Microsoft Local Language Program video. 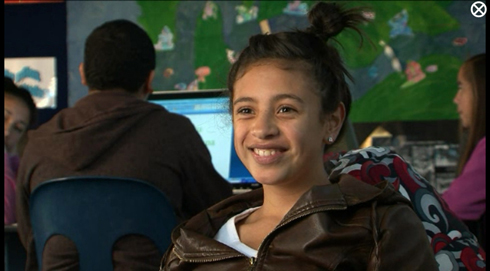 Using Maori Language Interface Packs for Microsoft software, children in New Zealand are able to not only speak Maori at home and at school, but use it for their digital communications, which will help preserve the future of the language. Image credit: Microsoft

Hurd said hundreds of languages are endangered because people are forced to speak a more mainstream or accessible language instead. When a language dwindles, the extinction of the culture isn’t far behind, she said.

Technology has a role to play as well, Hurd said, adding that “a language not found on the Internet is as good as dead.”

In some cases, connecting technology to a language may even help revitalize it, said Angela Cummings, Microsoft’s Windows localization lead.

“Once a language is used in software or in a publication or on the Internet, it enables more people to work directly in that language,” Cummings said. “It’s a way to, for lack of a better word, validate those languages and show that they’re important enough to be used every day and in a new world where business isn’t conducted verbally anymore.”

One of her favorite examples is the Inuktitut language, spoken by a small population in northern Canada – the smallest population of all of the languages Microsoft supports, Cummings said.

“It’s really opened my eyes to the importance of providing software to people in various languages as well as the importance of language preservation,” Cummings said. “I love the pride and satisfaction they get out of it. There are not very many companies in the world where you get to release a product in a language for the first time, and directly impact the people who will be using it.”

“If you can give people the productivity tools they need, it opens the door for greater economic opportunity for that country as a whole,” Woodman said. “We make great software, but at the end of the day you want people creating local solutions.”

For example, someone in Malaysia using Visual Studio in their native language to create grocery store inventory software, which can help stores lower prices, which can help people afford more.

According to Woodman: “This isn’t just about creating neat technology, it’s about helping people have the right tools to create the right environments and communities that they want to live in.”