EAST LANSING, Mich. — Climate change is already having an effect on the safety of the world’s food supplies and unless action is taken it’s only going to get worse, a Michigan State University professor told a symposium at this year’s meeting of the American Association for the Advancement of Science.

Ewen Todd, an MSU professor of advertising, public relations and retailing, organized a session titled “How Climate Change Affects the Safety of the World’s Food Supply” at which several nationally known experts warned that food safety is already an issue and will worsen unless climate change is confronted. 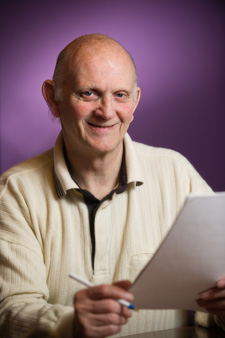 MSU professor Ewen Todd is the organizer of a symposium on climate change and food safety at this year's meeting of the American Association for the Advancement of Science. Image credit: Michigan State University.

“Accelerating climate change is inevitable with implications for animal products and crops,” said Todd, who also is an AAAS Fellow. “At this point, the effects of climate change on food safety are poorly understood.”

However, Todd said there are already a number of examples of climate change taking its toll on the world’s food supply. One is Vibrio, a pathogen typically found in warm ocean water which is now becoming more common in the north as water temperatures rise.

“It’s been moving further up the coast these past few years,” he said. “There was an outbreak of it near Alaska in 2005 when water temperature reached 15 degrees Celsius.”

Todd also said that extreme weather – droughts and heavy rains – is having an impact on the world’s food supply. In some areas crops are being wiped out, resulting in higher prices and other issues.

“Mycotoxins are molds that can sometimes cause illness in humans, and where you have drought and starvation there can be a mycotoxin problem,” he said. “That’s because people will store their meager resources of crops for longer than they should.”

Speakers at the symposium included Raymond Knighton of the U.S. Department of Agriculture’s National Institute of Food and Agriculture; Sandra Hoffman of the USDA’s Economic Research Service; and Cristina Tirado from the University of California, Los Angeles.