James B. Stewart, a Pulitzer Prize-winning author and reporter for the New Yorker, talked on campus on Oct. 4 about the inspiration for and process behind “Heart of a Soldier,” his 2002 book about Rick Rescorla, a security guard at the World Trade Center who lost his life on 9/11. Stewart’s talk was sponsored by the Poynter Fellowship in Journalism at Yale.

Tasked with reporting on the impact of the World Trade Center attacks on business, Stewart discovered — by chance — the heroic tale of Rick Rescorla and realized that his was a story worth telling. “If you have a character, anything becomes a story,” Stewart explained. 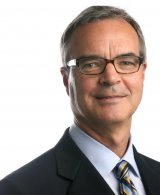 Stewart never set out to write an epic story, he told the Sudler Hall audience, but understood as he began to trace Rescorla’s story that this was something incredible. “I saw in the story components of something quite profound … something that touched on universal things,” Stewart said. It was a story, he noted, that spans decades and continents, and explores the bonds of duty, friendship, and love.

While the story had started as an article for the New Yorker, Stewart ultimately decided it would be best told as a book. With this inspiration and commitment to the project, Stewart told his publisher that he had to write the book, with or without an advance.

The challenge, said Stewart, was doing justice to such a complex emotional and personal story. In addition, from his perspective as an author, he said, he needed to write the story in a way that would be so compelling that he could capture and hold the attention of an audience that already knew how the story ended. “How do you get the audience to suspend their knowledge and put themselves in the minds of the characters?” Stewart asked.

Even after his book received commercial and critical success, Stewart never anticipated that his story would serve as the inspiration for another kind of work entirely: an opera. In 2011, “Heart of a Soldier” opened in San Francisco as an opera written by Christopher Theofanidis, a professor at the Yale School of Music.

Stewart, though proud of the book and this unexpected impact it made, said he does not expect something similar to happen to him again. “I’m not holding by breath. I know this is a once-in-a-lifetime event,” Stewart explained.