UA Regents’ Professor Nicholas Strausfeld and an international team of researchers have discovered the earliest known complete nervous system exquisitely preserved in the fossilized remains of a never-before described creature that crawled or swam in the ocean 520 million years ago.

A team of researchers led by University of Arizona Regents’ Professor Nick Strausfeld and London Natural History Museum’s Greg Edgecombe have discovered the earliest known complete nervous system, exquisitely preserved in the fossilized remains of a never-before described creature that crawled or swam in the ocean 520 million years ago.

The find suggests that the ancestors of chelicerates – spiders, scorpions and their kin – branched off from the family tree of other arthropods – including insects, crustaceans and millipedes – more than half a billion years ago.

Described in the current issue of the journal Nature, the specimen belongs to an extinct group of marine arthropods known as megacheirans (Greek for “large claws”) and solves the long-standing mystery of where this group fits in the tree of life.

“We now know that the megacheirans had central nervous systems very similar to today’s horseshoe crabs and scorpions,” said Strausfeld, the senior author of the study and a Regents’ Professor in the UA’s Department of Neuroscience. “This means the ancestors of spiders and their kin lived side by side with the ancestors of crustaceans in the Lower Cambrian.”

This is the fossil of the megacheiran Alalcomenaeus, a distant relative of scorpions and spiders. (Photo by: N. Strausfeld et al.)

The scientists identified the 3-centimeter-long creature unearthed from the famous Chengjiang formation near Kunming in southwest China, as a representative of the extinct genus Alalcomenaeus. Animals in this group had an elongated, segmented body equipped with about a dozen pairs of body appendages enabling the animal to swim or crawl or both. All featured a pair of long, scissor-like appendages attached to the head, most likely for grasping or sensory purposes, which gave them their collective name, megacheirans.

Co-author Greg Edgecombe said that some paleontologists had used the external appearance of the so-called great appendage to infer that the megacheirans were related to chelicerates, based on the fact that the great appendage and the fangs of a spider or scorpion both have an “elbow joint” between their basal part and their pincer-like tip.

“However, this wasn’t rock solid because others lined up the great appendage either a segment in front of spider fangs or one segment behind them,” Edgecombe said. “We have now managed to add direct evidence from which segment the brain sends nerves into the great appendage. It’s the second one, the same as in the fangs, or chelicerae. For the first time we can analyze how the segments of these fossil arthropods line up with each other the same way as we do with living species – using their nervous systems.” 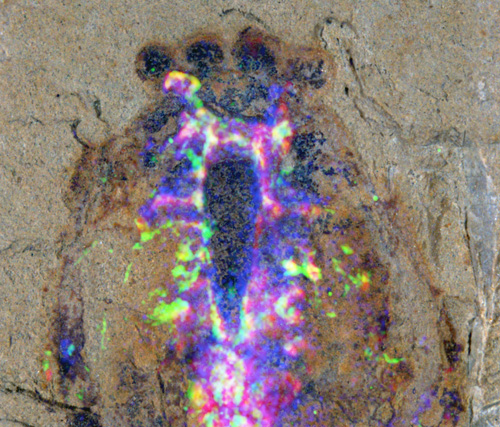 Close-up of the head region of the Alalcomenaeus fossil specimen with the superimposed colors of a microscopy technique revealing the distribution of chemical elements in the fossil. Copper shows up as blue, iron as magenta and the CT scans as green. The coincidence of iron and CT denote nervous system. The creature boasted two pairs of eyes (ball-shaped structures at the top). (Photo by: N. Strausfeld/UA)

The team analyzed the fossil by applying different imaging and image processing techniques, taking advantage of iron deposits that had selectively accumulated in the nervous system during fossilization.

To make the neural structures visible, the researchers used computed tomography (CT), a technique that reconstructs 3-D features within in the specimen. However, “the CT scan didn’t show the outline of the nervous systems unambiguously enough,” Strausfeld said, “while a scanning laser technique mapping the distribution of chemical elements showed iron deposits outlining the nervous system almost as convincingly but with minor differences.”

Next, the group applied advanced imaging techniques to the scans, first overlaying the magenta color of the iron deposit scan with the green color of the CT scan, then subtracting the two.

“We discarded any image data that were not present in both scans,” Strausfeld explained. “Where the two overlapped, the magenta and the green added to each other, revealing the preserved nervous system as a white structure, which we then inverted.”

This resulted in what resembled a negative X-ray photograph of the fossil.

“The white structures now showed up as black,” Strausfeld said, “and out popped this beautiful nervous system in startling detail.”

A fossil of the megacheiran Leanchoilia illecebrosa, showing its characteristic forceps-like great appendages. This species is a close relative of the more rare Alalcomenaeus and is likewise a distant relative of scorpions and spiders. (Photo by: Xianguang Hou/YKLP, China)

Comparing the outline of the fossil nervous system to nervous systems of horseshoe crabs and scorpions left no doubt that 520-million-year–old Alalcomenaeus was a member of the chelicerates.

Specifically, the fossil shows the typical hallmarks of the brains found in scorpions and spiders: Three clusters of nerve cells known as ganglia fused together as a brain also fused with some of the animal’s body ganglia. This differs from crustaceans where ganglia are further apart and connected by long nerves, like the rungs of a rope ladder.

Other diagnostic features include the forward position of the gut opening in the brain and the arrangement of optic centers outside and inside the brain supplied by two pairs of eyes, just like in horseshoe crabs.

To make the analysis more robust, the researchers then added these features to an existing catalog of about 150 characteristics used in constructing evolutionary relationships among arthropods based on neuroanatomical features.

“Greg plugged these characteristics into a computer-based cladistic analysis to ask, ‘where does this fossil appear in a relational tree?'” Strausfeld said. “Our fossil of Alalcomenaeus came out with the modern chelicerates.”

But according to Strausfeld, the story doesn’t end there.

“The prominent appendages that gave the megacheirans their name were clearly used for grasping and holding and probably for sensory inputs. The parts of the brain that provide the wiring for where these large appendages arise are very large in this fossil. Based on their location, we can now say that the biting mouthparts in spiders and their relatives evolved from these appendages.” 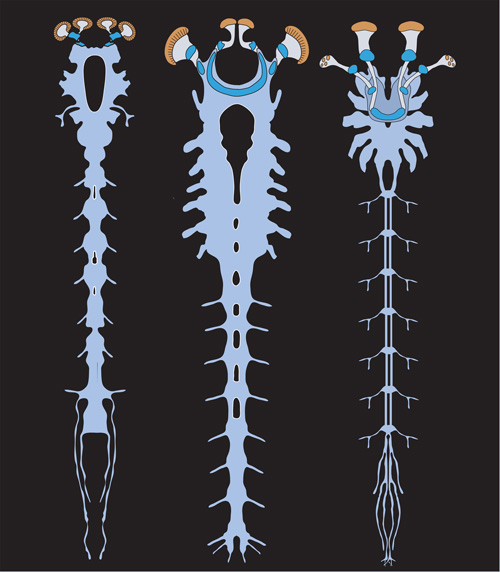 Illustration of the nervous systems of the Alalcomenaeus fossil (left), a larval horseshoe crab (middle) and a scorpion (right). Diagnostic features revealing the evolutionary relationships among these animals include the forward position of the gut opening in the brain and the arrangement of optic centers outside and inside the brain supplied by two pairs of eyes. (Illustration by: N. Strausfeld/UA)

Less than a year ago, the same research team published the discovery of a fossilized brain in the 520-million-year-old fossil Fuxianhuia protensa, showing unexpected similarity to the complex brain of a modern crustacean.

“Our new find is exciting because it shows that mandibulates (to which crustaceans belong) and chelicerates were already present as two distinct evolutionary trajectories 520 million years ago, which means their common ancestor must have existed much deeper in time,” Strausfeld said. “We expect to find fossils of animals that have persisted from more ancient times, and I’m hopeful we will one day find the ancestral type of both the mandibulate and chelicerate nervous system ground patterns. They had to come from somewhere. Now the search is on.”

For this research project, Strausfeld teamed up with Gengo Tanaka of the Japan Agency for Marine-Earth Science and Technology in Yokosuka, Japan; Xianguang Hou, director of the Yunnan Key Laboratory for Paleobiology at Yunnan University in Kunming, China; and Hou’s colleague Xiaoya Ma who is presently working with Gregory Edgecombe in the paleontology department of the Natural History Museum, London.

The work was supported by grants from the Natural Science Foundation of China (no. 40730211), Research in Education and Science from the Government of Japan (no. 21740370) and a Leverhulme Trust Research Project Grant (F/00 696/T) and also by the UA Center for Insect Science and a grant from the AFRL (FA86511010001) to Strausfeld.