ANCHORAGE, Alaska — Greenhouse gas emissions remain the primary threat to the preservation of polar bear populations worldwide. This conclusion holds true under both a reduced greenhouse gas emission scenario that stabilizes climate warming and another scenario where emissions and warming continue at the current pace, according to updated U.S. Geological Survey research models.

Under both scenarios, the outcome for the worldwide polar bear population will very likely worsen over time through the end of the century. 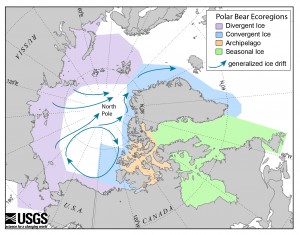 Polar Bear Ecoregions: In the Seasonal Ice Ecoregion (see map), sea ice melts completely in summer and all polar bears must be on land. In the Divergent Ice Ecoregion, sea ice pulls away from the coast in summer, and polar bears must be on land or move with the ice as it recedes north. In the Convergent Ice and Archipelago Ecoregions, sea ice is generally retained during the summer. Image credit: USGS (Click image to enlarge)

The modeling effort examined the prognosis for polar bear populations in the four ecoregions (see map) comprising their range using current sea ice projections from the Intergovernmental Panel on Climate Change for two greenhouse gas emission scenarios. Both scenarios examined how greenhouse gas emissions may affect polar bears: one looked at stabilization in climate warming by century’s end because of reduced GHG emissions, and the other looked at unabated (unchanged) rates of GHG emissions, leading to increased warming by century’s end.

“Addressing sea ice loss will require global policy solutions to reduce greenhouse gas emissions and likely be years in the making,” said Mike Runge, a USGS research ecologist. “Because carbon emissions accumulate over time, there will be a lag, likely on the order of several decades, between mitigation of emissions and meaningful stabilization of sea ice loss.”

Under the unabated emission scenario, polar bear populations in two of four ecoregions were projected to reach a greatly decreased state about 25 years sooner than under the stabilized scenario. Under the stabilized scenario, GHG emissions peak around 2040, decline through 2080, then decline through the end of the century. In this scenario, USGS projected that all ecoregion populations will greatly decrease except for the Archipelago Ecoregion, located in the high-latitude Canadian Arctic, where sea ice generally persists longer in the summer. These updated modeling outcomes reinforce earlier suggestions of the Archipelago’s potential as an important refuge for ice-dependent species, including the polar bear.

“Substantial sea ice loss and expected declines in the availability of marine prey that polar bears eat are the most important specific reasons for the increasingly worse outlook for polar bear populations,” said Todd Atwood, research biologist with the USGS, and lead author of the study. “We found that other environmental stressors such as trans-Arctic shipping, oil and gas exploration, disease and contaminants, sustainable harvest and defense of life takes, had only negligible effects on polar bear populations—compared to the much larger effects of sea ice loss and associated declines in their ability to access prey.”

Additionally, USGS researchers noted that if the summer ice-free period lengthens beyond 4 months – as forecasted to occur during the last half of this century in the unabated scenario – the negative effects on polar bears will be more pronounced. Polar bears rely on ice as the platform for hunting their primary prey – ice seals – and when sea ice completely melts in summer, the bears must retreat to land where their access to seals is limited. Other research this year has shown that terrestrial foods available to polar bears during these land-bound months are unlikely to help polar bear populations adapt to sea ice loss.

USGS scientists’ research found that managing threats other than greenhouse gas emissions could slow the progression of polar bear populations to an increasingly worse status. The most optimistic prognosis for polar bears would require immediate and aggressive reductions of greenhouse gas emissions that would limit global warming to less than 2°C above preindustrial levels.

The U.S. Fish and Wildlife Service listed the polar bear as threatened under the Endangered Species Act in 2008 due to the threat posed by sea ice loss. The polar bear was the first species to be listed because of climate change. A plan to address recovery of the polar bear will be released into the Federal Register by the USFWS for public review on July 2, 2015.

The updated forecast for polar bears was developed by USGS as part of its Changing Arctic Ecosystems Initiative, together with collaborators from the U.S. Forest Service and Polar Bears International. The polar bear forecasting report is available online.