Thanks to the presence of a natural “zoom lens” in space, University of Chicago scientists working with NASA’s Hubble Space Telescope have obtained a uniquely close-up look at the brightest gravitationally magnified galaxy yet discovered.

The imagery offers a visually striking example of gravitational lensing, in which one massive object’s gravitational field can magnify and distort the light coming from another object behind it. Such optical tricks stem from Einstein’s theory of general relativity, which describes how gravity can warp space and time, including bending the path that light travels.

In this case, gravity from the galaxy cluster RCS2 032727-132623 bent and amplified the light coming from a much more distant galaxy, 10 billion light-years from Earth. This “gravitational telescope” creates a vast arc of light, as if the distant galaxy had been reflected in a funhouse mirror. The UChicago team reconstructed what the distant galaxy really looks like, using computational tools that reversed the effect of gravitational lensing. 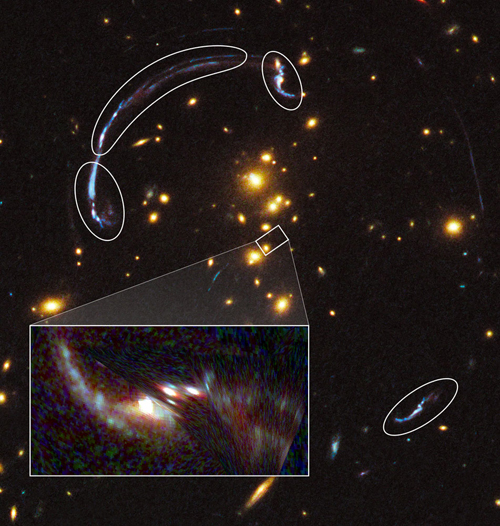 This graphic shows a reconstruction (at lower left) of the brightest galaxy, whose image has been distorted by the gravity of a distant galaxy cluster. The small rectangle in the center shows the location of the background galaxy on the sky if the intervening galaxy cluster were not there. The rounded outlines show distinct, distorted images of the background galaxy resulting from lensing by the mass in the cluster. The image at lower left is a reconstruction of what the lensed galaxy would look like in the absence of the cluster, based on a model of the cluster's mass distribution derived from studying the distorted galaxy images. Image courtesy of NASA; ESA; J. Rigby (NASA Goddard Space Flight Center); K. Sharon (Kavli Institute for Cosmological Physics); and and M. Gladders and E. Wuyts (University of Chicago)

“What’s happening here is a manifestation of general relativity,” said Michael Gladders, assistant professor in astronomy & astrophysics at UChicago. “Instead of seeing the normal, faint image of that distant source, you see highly distorted, highly magnified, and in this case, multiple images of the source caused by the intervening gravitational mass.”

The cosmic lens gave the UChicago team the unusual opportunity to see what a galaxy looked like 10 billion years ago. The reconstructed image of the galaxy revealed regions of star formation glowing like bright points of light. These are much brighter than any star-formation region in Earth’s home galaxy, the Milky Way. 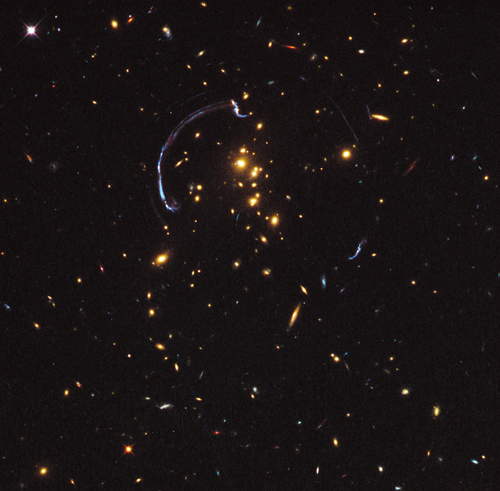 Thanks to the presence of a natural “zoom lens” in space, this is a close-up look at the brightest distant “magnified” galaxy in the universe known to date. It is one of the most striking examples of gravitational lensing, where the gravitational field of a foreground galaxy bends and amplifies the light of a more distant background galaxy. In this image the light from a distant galaxy, nearly 10 billion light-years away, has been warped into a nearly 90-degree arc of light in the galaxy cluster RCS2 032727-132623. Image courtesy of NASA; ESA; J. Rigby (NASA Goddard Space Flight Center); and K. Sharon (Kavli Institute for Cosmological Physics)

‘Looking at the nature of dark matter’

In 2006 the Chicago astronomers used the Very Large Telescope in Chile to measure the arc’s distance and calculated that the galaxy appears more than three times brighter than previously discovered lensed galaxies. Then last year, Jane Rigby of NASA’s Goddard Space Flight Center in Greenbelt, Md., and the Chicago team imaged the arc with the Hubble Space Telescope’s Wide Field Camera 3.

Using this gravitational lens as a telescope offers two major scientific opportunities, Gladders said. First, “It gives us a look at that very distant source with a precision and fidelity that we couldn’t otherwise achieve,” he said. 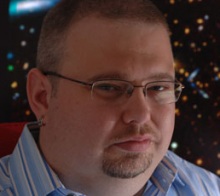 And second, it provides an opportunity to learn something about the lens-forming mass, which is dominated by dark matter. “It’s really a way of looking at the nature of dark matter,” Gladders said. Dark matter accounts for nearly 90 percent of all matter in the universe, yet its identity remains one of the biggest mysteries of modern science.

Keren Sharon, a postdoctoral scholar at UChicago’s Kavli Institute for Cosmological Physics, led the effort to perform a detailed reconstruction of the lensed galaxy. She and her co-authors, including Gladders, NASA’s Rigby and UChicago graduate student Eva Wuyts, published their findings last month in the Astrophysical Journal.

Sharon painstakingly created a computer reconstruction of the gravitational lens, then reverse-engineered the distorted image to determine the distant galaxy’s actual appearance. “It’s a little bit of an art, but there’s a lot of physics in it. That’s the beauty of it,” Sharon said. “It was a fun puzzle to solve, especially when we had such great data.”

Gladders said Sharon is “one of the world experts on exactly how to do this. Combine that degree of finesse with this quality of data, and you get a very nice result. This object now becomes not only the brightest-lensed source known, but because of this analysis, it is also going to be one of the best-understood sources.”

Through spectroscopy, the spreading out of light into its constituent colors, the team plans to analyze the distant galaxy’s star-forming regions from the inside out to better understand why they are forming so many stars.

The team also has obtained data from one of the twin Magellan Telescopes to help them determine why the galaxy, which is 10 billion light years away, looks so irregular.

“It’s not like we have something to compare it to,” Sharon said. “We don’t know what other galaxies at the same distance look like at this level of detail.”

– By Steve Koppes and Ray Villard