Going for broken: Inside the Microsoft lab where devices get tested to death

In an unmarked, windowless building at a confidential location, bad things happen to good hardware.

Welcome to your device’s darkest nightmare, Microsoft’s reliability lab at the company’s headquarters in Redmond, Washington. At this tech torture chamber, a cadre of engineers and technicians hunt for weakness, stressing every inch of every type of Microsoft product, from hinges to hard drives, keycaps to cases.

The reliability lab is part of Microsoft’s Product Quality program, which also focuses on design verification, materials analysis, compliance and safety. The lab’s proximity to hardware developers on Microsoft’s main campus ensures that insights and data on quality and reliability are met in every part of a product’s life cycle, Darbha says. Tests are designed to optimize overall customer experience.

Some Microsoft partners and customers benefit from the lab’s learnings, receiving intel that enables their own product upgrades – and the digital transformation of their companies, Darbha says.

“We have shared details on technologies and qualification approaches with partners and customers on an as-needed basis and found benefit in doing so,” Darbha says. 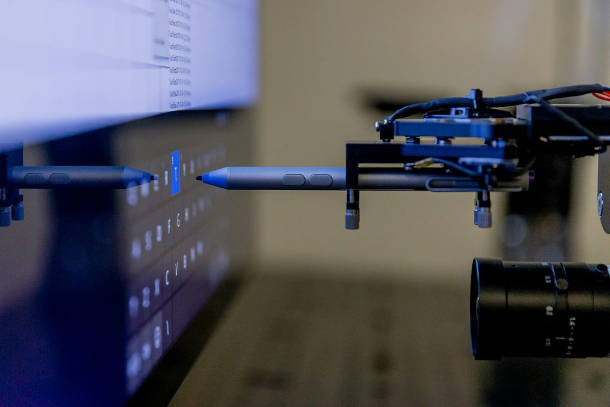 A Surface Pen, guided by a robotic arm, presses every button on a Surface device – over and over for weeks. Photo credit: Scott Eklund/Red Box Pictures.

His team works in a secluded yet sprawling laboratory divided among more than a dozen locked rooms, each secured by a red, metal door.

The hums and thuds of testing machines fill those spaces. Concrete hallways link the rooms, which never see daylight and exude the feel of a bunker. Lab staff move from space to space and chamber to chamber to inflict willful harm on the gadgets.

“I love to break devices. It’s my passion,” Brad Thompson, reliability lab manager, says with a grin. “But all of it leads to better hardware.”

Part of the lab’s aim is to essentially Earth-proof products, such as Surface Pro 4 tablets used on football sidelines by players and coaches. The goal is to find and fix possible failures due to exposure to outdoor elements or to severe surroundings like those found in an ocean cargo vessel or a hot car.

“We simulate environmental conditions seen in the real world with accelerated testing in our weather chambers,” Darbha says. “We do very hot and very cold, and then cycle through both extremes.”

Here is a glimpse into some of those exhaustive exams.

On a recent morning, a Surface Studio faced a multi-day bake within a walk-in chamber set to 131 degrees Fahrenheit (55 Celsius) and 85 percent relative humidity. Such tests can also examine individual components such as mechanical hinges and touch displays, internal circuitry or basic materials like adhesives and paints.

At designated points during tests or after their completion, lab staff investigate any changes in, say, the behavior of the electronics or the structure of the display screen.

How precise are the post-test measurements to learn those answers?

“It’s in microns,” Darbha says. One micron equals .001 millimeters. “You won’t see it with the naked eye.”

But even without measuring, the team can typically sense if there’s been a subtle change.

“We know,” he says. “And this tells us the physics of why things fail. It helps us in design and diagnostics, both ends.”

The Surface Studio that slowly roasted in the lab’s oven represented just part of the climate assault directed at devices during that same testing day.

Several Surface Pros spent hours in a salt-fog machine that mimicked the air aboard a container ship on the Pacific Ocean. The team later inspected them for signs of corrosion, inside and out.

Still more laptops faced a stream of ultraviolet radiation in another chamber. For a week, xenon bulbs bathed bright, white beams onto the hardware – the equivalent of months of direct and indirect solar energy.

“We’re taking sunlight and concentrating it, making it more intense to shrink down the time for your material to see that cumulative exposure,” says Jonathan Lehl, a test engineer. “It’s pretty strong so there’s a lock on the chamber door. It would give you a sunburn in a minute.”

He and other engineers later would pour over the tested laptops to spot any decrease in color contrast, wear to adhesives or damage to the cases.

Down the hall, a hose spritzed water onto a Surface Pro perched upright atop a drain behind a shower curtain. Repeated cycles of spray and drip-drying would match months of use on a football sideline. Display and functionality were then checked and re-checked.

Meanwhile, test engineer Bob McPherson dabbed a goop-filled cotton swab onto the case of a Surface Pro – its top previously sectioned into eight equal parts. Each zone received a different dollop of household or office chemicals, from skin lotion to window cleaner.

After McPherson’s application, he placed the case into a chamber for several hours of “cooking,” followed by an analysis of any chemical reactions.

Then there was dust. Behind the window of a tall chamber, a motor blew a thick cloud of powder onto – and into – a Surface laptop, corresponding to a lifetime of dust exposure in a home or office. Among the questions answered later: How would the laptop’s fan work? Would it still cool the hardware? Would the laptop run efficiently?

“It’s worth more than gold, too,” Thompson says.

A variety of contraptions simulated the sudden violence of a device dropped from heights of 2 meters or more onto surfaces ranging from carpet to concrete.

One thin machine resembling a guillotine – called a “shock tower” – held a packaged Surface device several feet above the floor. The tower can produce a gravity-acceleration force of up to 600 Gs. For context, humans may lose awareness at 5 Gs.

Two technicians wearing eye and ear protection sat about 10 feet away from the tower, peering into their laptops. High-speed cameras focused on the packaged device to capture every ripple of impact. One technician announced, “Acquiring data … arming … dropping.” The tower rocketed the device downward with a sharp pop, mimicking a 48-inch drop onto wood.

Later, the video would be scrutinized and the packaged device examined both visually and microscopically to assess any damage. Controlled-impact tests like that also can target individual corners, edges, even one button on a device.

“We want to know: Where is the weakness of a product?” Darbha says. “I’m going to target that weakness and assess the robustness. Because the system is only as reliable as its weakest link.”

A less-violent but equally destructive force: years of simple, daily use.

To replicate that, the lab conducts numerous functional and mechanical tests, gauging a device’s long-term toughness in a short window.

In one room, a robotic arm gripped a Surface Pen, guiding it across a Surface Studio screen and producing a tight grid of horizontal and vertical lines. Then the robot cleared the screen and went to work again.

The pen and screen would undergo that same tedious cycle hundreds of more times over the next week.

Nearby, another robotic arm maneuvered a Surface Pen to power a device on and off, place it in standby mode, cause it to reboot, touch every key, start videos, transfer files, activate the camera, even snap photos. Then repeat.

“Everything a user would do,” says Nathan Patterson, a test engineer. “It will do this for weeks.”

Which means that after inflicting all that torment, ultimately to ensure customer confidence in the products, the testers just continued to – yes – push their buttons.