COLUMBIA, Mo. – “Place-based identity” is the idea that people form a sense of place and establish connections to a geographical area. Often, place-based struggles arise when that sense of home is threatened by development or undermined by non-local actors. In a new book that focuses on place-based activism led by indigenous people in the United States, Canada and New Zealand, Soren Larsen suggests that today’s place-based battles are transforming the way native and non-native people are understanding and relating to place itself. 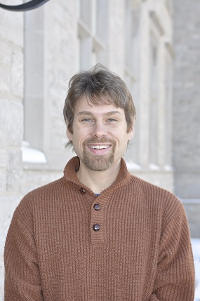 Larsen is working to understand the sometimes antagonistic ways in which groups communicate—battles that also are transforming government, communities and politics within those groups. Image credit: University of Missouri

In his book, “Being Together in Place,” Larsen, an associate professor of geography in the MU College of Arts and Science, and his colleague, Jay T. Johnson, associate professor of geography at the University of Kansas, use the term “agency of place” to describe the process of listening to place and discovering one’s responsibilities to the interconnected nature of people, plants and animals. Focusing on three sites—the Wakarusa Wetlands in northeastern Kansas; the Waitangi Treaty Grounds in New Zealand; and the Cheslatta Carrier Nation in British Columbia—the scholars explore the often-challenging work involved in defending wetlands, treaty grounds, cemeteries, lakes, and rivers from development, neglect and outright destruction. In defending those places, people are learning to how to coexist in ways that are more just and sustainable.

Using interviews and participant observation, Larsen and his colleague discovered a way of thinking in these activist movements where place is understood to have its own distinct power to help humans and nonhumans communicate with one another and coexist, often by bringing them together in antagonistic ways such as protest.

“In Kansas, we focused on the struggle of Indigenous people and their allies to preserve the Wakarusa wetlands against the construction of a highway bypass just outside of Lawrence,” Larsen said. “People today are reengaging place-based politics as a way of strengthening their communities, restoring the land and securing the capacity for self-governance; in the Wakarusa chapters, we studied how that is playing out close to home.”

The Kansas Department of Transportation, which was in charge of the highway project, promoted the plan as a way for drivers to bypass the streets of Lawrence in order to access Interstate 70 from Highway #10. The bypass was completed in November 2016. Opponents argued that the construction would irreparably harm the Wakarusa Wetlands, a diverse ecosystem of animals and plants that is also important to Indigenous and non-native peoples.

According to Larsen, place-based struggles—including the competition over the bypass through the Wakarusa wetlands—use a wide array of tactics, such as activism, protests and social organizing, intended to promote the connections between a group of people and the communities and places that sustain and support them.

“Our research and observations of place-based struggles show us that an opportunity exists to explore how these clashes are altering politics and relationships in communities, even if the movement fails to achieve its stated aims,” Larsen said. “In our upcoming book, we provide better ways of thinking about local conflicts that are grounded in the agency of place to teach the lessons and responsibilities of our more-than-human interconnectedness.”

In the book, the authors identify strategies and best practices that would create more equitable social and ecological relationships at home and internationally—strategies that should help shape the way individuals and groups co-exist around community issues.

The book, “Being Together in Place,” recently was published by The University of Minnesota Press.