*The world’s only bioluminescent millipedes use their glow as a warning signal to nocturnal predators, a UA-led research team has discovered.*

As night falls in certain mountain regions in California, a strange breed of creepy crawlies emerges from the soil: millipedes that glow in the dark. The reason behind the glowing secret has stumped biologists until now.

Paul Marek, a research associate in the University of Arizona’s department of entomology and Center for Insect Science, and his team now provide the first evidence gained from field experiments of bioluminescence being used as a warning signal. They discovered that the nightly glow of millipedes belonging to the genus Motyxia helps the multi-legged invertebrates avoid attacks by predators.

The findings will be published in the Sept. 27 print edition of the journal Current Biology. 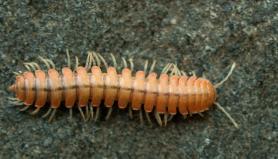 Millipedes of the genus Motyxia spend the day burrowed under soil and leaves. They come out to forage at night, when they are sought after by predators. (Photo: Paul Marek)

Biologists have discovered and described more than 12,000 species of millipedes, but the vast majority remains undiscovered and is thought to number around 100,000.

Just like all other millipedes, Motyxia are vegetarians, feeding mostly on decaying plant material, but in the course of adapting to a lifestyle primarily underground, they lost the ability to see.

“They spend the day burrowed beneath the soil and leaf material, but even though they are blind, they somehow sense when night falls and come to the surface to forage and mate and to go about their millipede business,” said Marek, who conducted this work under the NIH Postdoctoral Excellence in Research and Training program in the labs of Wendy Moore, an assistant professor of entomology and curator of the UA Insect Collection and Dan Papaj, a professor of ecology and evolutionary biology at the UA.

“When they are disturbed, they ooze toxic cyanide and other foul-tasting chemicals from small pores running along the sides of their bodies as a defense mechanism,” Marek explained. “Some millipede species that are active during the day display bright warning colors to announce their defenses to predators, but because Motyxia are out when it’s dark, we hypothesized they use their greenish glow in place of a warning coloration.” 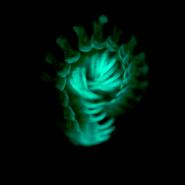 A prolonged exposure taken in the darkroom, showing the greenish glow of a Motyxia millipede. (Photo: Paul Marek)

Known as bioluminescence, the ability to glow in the dark is remarkably widespread in the animal kingdom. The most commonly known examples include fireflies, glowworms – which are in fact beetles – and animals inhabiting the pitch-black darkness of the deep oceans.

In some of those examples, bioluminescence is thought to help attract mates, send messages back and forth among members of the same species, or attract prey like in the case of the deep-sea angler fish, which dangles a glowing lure in front of its gaping mouth. Any small fish or other animal following the beacon’s glow is gulped up as it approaches the invisible predator hiding in the darkness.

Marek and his co-workers hypothesized by using bioluminescence as a warning signal, luminescent millipedes would be attacked less than non-luminescent ones.

To test this hypothesis, Charity Hall, Marek’s wife and a metalsmith, made a bronze cast of a millipede, which the team used to create molds to cast 300 fake millipedes in clay. Half of those they painted with an artificial, long-lasting glow-in-the-dark paint. 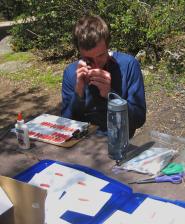 For the field experiment, the group took their clay millipede collection to Giant Sequoia National Monument in California, where they set them on the ground along a transect line, spaced 5 meters (16 feet) apart. Glowing and non-glowing individuals were distributed in random order to avoid sampling bias.

They then set out to collect real millipedes in the same general area.

“Motyxia are extremely common out there,” Marek said. “If you sit there in a moonless night, the ground will look like the starry night sky up above, from all those millipedes glowing in the dark.”

The next morning: carnage

The live millipedes were divided into two groups: One was covered with paint to conceal the natural glow, the other was left untreated. Just like with the clay models, the real millipedes were distributed along a different transect line, with glowing and non-glowing animals in random order.

“To make sure they wouldn’t walk out of the experiment, we used a fly-fishing knot gently tied around their back segments to tether them to the ground,” Marek explained.

The next morning, the researchers went to collect the live and clay millipedes and assess the results.

“It was just – carnage,” Marek said. “We were really surprised at the predation rate on these millipedes. Overall, about one-third of them – both real and fake – had been attacked.”

Four times as many non-glowing millipedes showed evidence of attacks compared to their glowing peers. Similarly, in the clay group, non-luminescent models were attacked twice as often than those that emitted the glow.

To learn more about what kinds of predators had nibbled on – or devoured – the study subjects, Marek took the clay models and the remains of the real millipedes to the rodent collection at the California Academy of Sciences and matched the strike marks with the teeth in rodent skulls. Combining those data with observations at the study site, the team concluded that the grasshopper mouse (Onychomys torridus) is one of the millipedes’ most likely predators.

“Remarkably, most of the predation marks were localized to the head, even in the clay models,” Marek said. “So somehow those predators were able to tell the head from the tail end and go for the head first, which is a behavior typically seen in vertebrate predators.”

One of evolution’s brightest moments

To get a better idea of how the ability to glow in the dark evolved in millipedes, the team sequenced selected gene regions and estimated their evolutionary history to pinpoint the origin of bioluminescence in millipedes.

Interestingly, a few of the species in the glowing genus Motyxia can switch their glow on and off. Marek and his co-workers measured glowing intensity of species in the genus using darkroom photography and traced the results on an evolutionary tree. They determined that the ability to glow evolved only once in millipedes and is restricted to a set of closely related species, all in the genus Motyxia.

“There are only three places on the planet where you can see glow-in-the-dark millipedes,” Marek said. “The Santa Monica Mountains, the Tehachapi Mountains and the southern Sierra Nevada Mountains, all of which are in California.”

The precise biochemical mechanism by which the millipedes achieve this feat is up for future research.

“For now, all that we know is they use a different mechanism than fireflies or glowworms,” said Marek, “which use an enzymatic reaction. The millipedes have a photoprotein that is similar to the Green Fluorescent Protein of the jellyfish Aequorea victoria. It is thought to be activated by calcium and energy-rich compounds in the cell to create the glow.”

The co-authors of the paper, “Bioluminescent aposematism in millipedes,” are Daniel Papaj, a professor in the UA’s department of ecology and evolutionary biology; Justin Yeager, a doctoral student at Tulane University; Sergio Molina, who is in the biology department at Pima Community College in Tucson, Ariz.; and Wendy Moore, an assistant professor in the UA’s department of entomology and curator of the UA Insect Collection.

*Source: The University of Arizona (Published on September 26, 2011)