*BizSpark One startup delivers software that’s easy for doctors to use.*

Recognizing an opportunity with massive global implications, BizSpark One startup gloStream is developing software that has the potential to transform the medical industry. By embedding the familiar Microsoft Office interface into its software, gloStream is making it easier for doctors and clinics to store medical records electronically while ensuring regulatory compliance.

“The medical profession is, in many ways, an information business,” says Mike Sappington, CEO of gloStream. “The largest — and arguably the most important — industry in the U.S. is still mired in paper-based processes.”

Sappington became involved with gloStream after he was introduced to Yaw Kwakye and Milind Ghyar, the company’s founders. Sappington says the duo had the best way to help doctors capture information digitally so they could make great decisions for patient health. 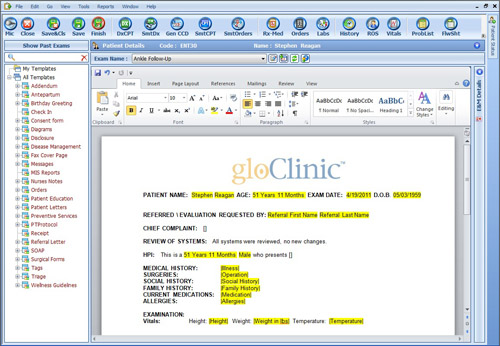 A look at gloEMR 6.0, which gives doctors single-click access to patient medical information and produces documents based on Microsoft Office. Image credit: Microsoft

“Our solutions are based on the Microsoft platform and incorporate Microsoft Word in a way that lets doctors practice medicine and enter documentation the way they want to,” he says. “Every patient encounter is different — and every doctor practices medicine a little differently — but much of the documentation remains the same. With gloStream doctors can, for example, document that a patient requires an MRI but add in the information that’s unique to that patient.”

Another way gloStream sets itself apart is by offering physicians a money-back success guarantee.

“We tell our clients that we’ll get them back to full patient load within 15 clinic days of their EMR implementation completion date if they move to our product,” says Sappington, “and if they can’t get there, we’ll give them their money back. We can do this because of the way our products are architected and deployed, plus we offer local on-site support.”

Ahead of the Curve

The gloStream name, originally intended to signify a global business that streamlines a complex process, is also a nod to the idea that the company shines a bright light on complex processes and offers powerful solutions to help clients reach their goals.

Today gloStream is growing rapidly thanks to its intuitive solutions. The six-year-old company released its sixth major upgrade to its gloEMR product line in January. It also hired 50 people in the past year, recently announced plans to invest $1.4 million in its Troy, Mich., resource center, and forecast the addition of another 40 jobs in 2011. Development is centralized at a wholly owned subsidiary in Nasik, India. 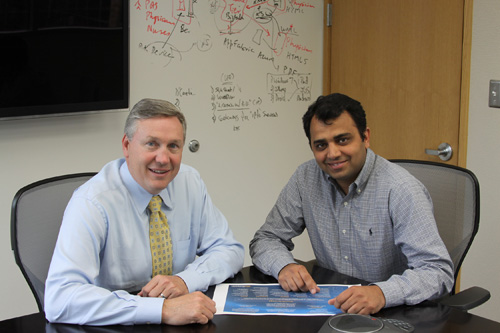 In addition to offering products that physicians find simple to use and quick to deploy, gloStream is benefitting from a trend within the healthcare sector toward the use of EMR. An injection of $20 billion in federal stimulus funding is encouraging Medicare and Medicaid providers to embrace EMR products such as gloStream’s gloEMR. The funding comes as the healthcare industry is topping 16 percent of gross domestic product and expecting to hit 19.3 percent by 2017, according to the U.S. Department of Health and Human Services.

Great idea and timing aside, gloStream had challenges to conquer before it could penetrate the marketplace. “We had to make sure we were serving our initial customers satisfactorily, of course, and we also needed to find partners who believed in our idea and could help us execute our strategy,” Sappington says.

gloStream made the decision early on to participate in Microsoft BizSpark. “As a young startup, we found tremendous value in the partner network offered to us through Microsoft BizSpark, as well as the opportunity to work directly with Microsoft product teams,” says Sappington.

gloStream worked with Microsoft technical and business teams to align its architecture to the company’s current and future road maps. For example, the gloEMR dashboard gives doctors single-click access to every piece of patient information in the chart, and templates are built using Microsoft Office. This means doctors can dictate, type or even draw into their documents with an interface that is familiar to millions worldwide.

Through BizSpark, gloStream received marketing and business assistance as well. “Microsoft has a very strong local partner presence around the world. By tapping into that network through our participation in BizSpark, we were able to provide doctors with a higher level of personalized service than if we tried to sell our products directly,” Sappington says.

As its products were readied for sale, gloStream focused on building a national presence. “It takes time, energy, money and the right people in the right locations to obtain the first customers who can become references for you,” says Sappington. “The average size of a medical practice is about three doctors, and there are a couple hundred thousand practices in the country. It’s a big job to find them and talk to them about our products. BizSpark has given us the tools to reach new customers and shine a spotlight on our products.”

Making product guarantees and entering an industry that already has established players can be tough for a startup. Sappington notes that competitors aren’t always happy to see gloStream coming.

“I’m a big believer that you need to get out and make a statement, stand behind it and then force the competition to react to you versus you reacting to them. A great thing about being an entrepreneur is that you don’t have the same baggage as an established company,” he says. “You have the luxury of being disruptive by doing something different and being bold about it.”