The Yarlung-Tsangpo River in southern Asia drops rapidly through the Himalaya Mountains on its way to the Bay of Bengal, losing about 7,000 feet of elevation through the precipitously steep Tsangpo Gorge.

For the first time, scientists have direct geochemical evidence that the 150-mile long gorge, possibly the world’s deepest, was the conduit by which megafloods from glacial lakes, perhaps half the volume of Lake Erie, drained suddenly and catastrophically through the Himalayas when their ice dams failed at times during the last 2 million years.

“You would expect that if a three-day long flood occurred, there would be some pretty significant impacts downstream,” said Karl Lang, a University of Washington doctoral candidate in Earth and space sciences.

In this case, the water moved rapidly through bedrock gorge, carving away the base of slopes so steep they already were near the failure threshold. Because the riverbed through the Tsangpo Gorge is essentially bedrock and the slope is so steep and narrow, the deep flood waters could build enormous speed and erosive power.

As the base of the slopes eroded, areas higher on the bedrock hillsides tumbled into the channel, freeing microscopic grains of zircon that were carried out of the gorge by the fast-moving water and deposited downstream. 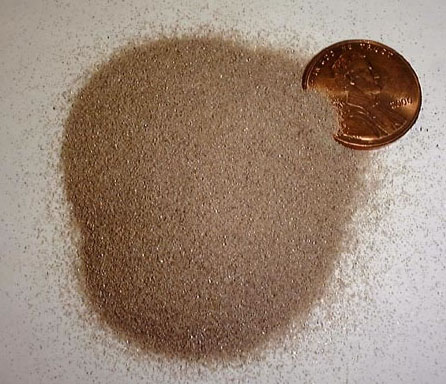 This 2005 image shows a concentration of grains of zircon taken from sand deposits, where it occurs with other heavy minerals such as magnetite and ilmenite. Image credit: U.S. Geological Survey

Uranium-bearing zircon grains carry a sort of geochemical signature for the place where they originated, so grains found downstream can be traced back to the rocks from which they eroded. Lang found that normal annual river flow carries about 40 percent of the grains from the Tsangpo Gorge downstream. But grains from the gorge found in prehistoric megaflood deposits make up as much as 80 percent of the total.

He is the lead author of a paper documenting the work published in the September edition of Geology. Co-authors are Katharine Huntington and David Montgomery, both UW faculty members in Earth and space sciences.

The Yarlung-Tsangpo is the highest major river in the world. It begins on the Tibetan Plateau at about 14,500 feet, or more than 2.5 miles, above sea level. It travels more than 1,700 miles, crossing the plateau and plunging through the Himalayas before reaching India’s Assam Valley, where it becomes the Brahmaputra River. From there it continues its course to the Ganges River delta and the Bay of Bengal.

At the head of the Tsangpo Gorge, the river makes a sharp bend around Namche Barwa, a 25,500-foot peak that is the eastern anchor of the Himalayas. Evidence indicates that giant lakes were impounded behind glacial dams farther inland from Namche Barwa at various times during the last 2.5 million years ago. 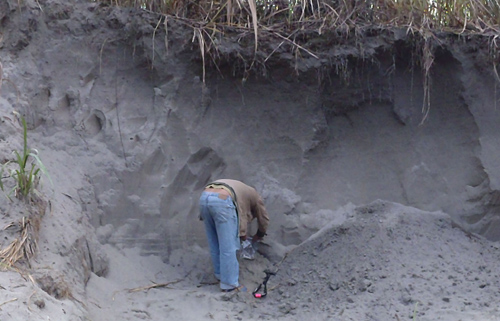 During a 2011 field trip, a regional assistant gathers samples from a deposit left by a catastrophic flood on the Yarlang-Tsangpo River in 2000. Image credit: Karl Lang/UW

Lang matched zircons in the megaflood deposits far downstream with zircons known to come only from Namche Barwa, and those signature zircons turned up in the flood deposits at a much greater proportion than they would in sediments from normal river flows. Finding the zircons in deposits so far downstream is evidence for the prehistoric megafloods and their role in forming the gorge.

Lang noted that a huge landslide in early 2000 created a giant dam on the Yiggong River, a tributary of the main river just upstream from the Gorge. The dam failed catastrophically in June 2000, triggering a flood that caused numerous fatalities and much property damage downstream.

That provided a vivid, though much smaller, illustration of what likely occurred when large ice dams failed millions of years ago, he said. It also shows the potential danger if humans decide to build dams in that area for hydroelectric generation.

“We are interested in it scientifically, but there is certainly a societal element to it,” Lang said. “This takes us a step beyond speculating what those ancient floods did. There is circumstantial evidence that, yes, they did do a lot of damage.”

The process in the Tsangpo Gorge is similar to what happened with Lake Missoula in Western Montana 12,000 to 15,000 years ago. That lake was more than 10,000 feet lower in elevation than lakes associated with the Tsangpo Gorge, though its water discharge was 10 times greater. Evidence suggests that Lake Missoula’s ice dam failed numerous times, unleashing a torrent equal to half the volume of Lake Michigan across eastern Washington, where it carved the Channeled Scablands before continuing down the Columbia River basin.

“This is a geomorphic process that we know shapes the landscape, and we can look to eastern Washington to see that,” Lang said.

The work was funded by the National Science Foundation and the UW Quaternary Research Center.