Researchers at the University of Exeter and University College London (UCL) have identified a gene which can be used to predict how susceptible a young person is to the mind-altering effects of smoking cannabis. The finding could help identify otherwise healthy users who are most at risk of developing psychosis.

The research, funded by the Medical Research Council and published in Translational Psychiatry, also shows that female cannabis smokers are potentially more susceptible to short-term memory loss than males. Previous studies in this field have looked at people who already have psychosis, but this is the first study to look at healthy people and to examine their acute response – or how the drug affects their minds. 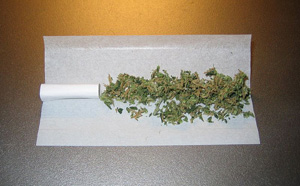 Previous research has found a link between the AKT1 gene and people who have gone on to develop psychosis. In the new study, Celia Morgan, Professor of Psychopharmacology at the University of Exeter and Professor Val Curran and her team from UCL found that, when under the influence of cannabis, young people with variation in the ‘AKT1’ gene experienced visual distortions, paranoia and other psychotic-like symptoms more strongly than young people without this variation.

Around one per cent of cannabis users develop psychosis. Although low in number, the impact can be devastating and long lasting. It is known that smoking cannabis daily doubles an individual’s risk of developing a psychotic disorder, but it has been difficult to establish who is most vulnerable. Researchers have previously found a high prevalence of one variant of the AKT1 genotype in cannabis users who went on to develop psychosis as a result of their use. This is the first research that shows the link between the same gene and the effects of smoked cannabis in healthy young people.

It is hoped that it will help identify those most at risk of the negative effects of cannabis smoking and may aid the development of genotype targeted medication.

Professor Morgan said: “These findings are the first to demonstrate that people with this AKT1 genotype are far more likely to experience strong effects from smoking cannabis, even if they are otherwise healthy. To find that having this gene variant means that you are more prone to mind-altering affects of cannabis when you don’t have psychosis gives us a clue as to how it increases risk in healthy people.

“Putting yourself repeatedly in a psychotic or paranoid state might be one reason why these people could go on to develop psychosis when they might not have done otherwise. Although cannabis-induced psychosis is very rare, when it happens it can have a terrible impact on the lives of young people. This research could help pave the way towards the prevention and treatment of cannabis psychosis.”

Professor Curran added: “The current study is the largest ever to be conducted on the acute response to cannabis. Our finding that psychotic-like symptoms when young people are ‘stoned’ are predicted by AKT1 variants is an exciting breakthrough as this acute reaction is thought to be a marker of a person’s risk of developing psychosis from smoking the drug.”

The study involved 442 young cannabis users who were tested while under the influence of the drug, and while sober. The researchers measured the extent of the symptoms of intoxication and effect on memory loss and compared it to results seven days later when the young people were drug free. They found that those with this variation in the AKT1 geneotpye were more likely to experience a psychotic response.

As part of the study, researchers gained permission from the Home Office to analyse the cannabis samples for their make-up and strength. Samples were dropped off at a police station and analysed by the forensic science service.

The research also found that females were more vulnerable than males to impairment in short term memory after smoking cannabis.

“Animal studies have found that males have more of the receptors that cannabis works on in parts of the brain important in short term memory, such as the prefrontal cortex. We need further research in this area, but our findings indicate that men could be less sensitive to the memory impairing effects of cannabis than females,” added Professor Morgan.