Gardener’s Delight Offers Glimpse into the Evolution of Flowering Plants

The Pink Double Dandy peony, the Double Peppermint petunia, the Doubled Strawberry Vanilla lily and nearly all roses are varieties cultivated for their double flowers.

The blossoms of these and other such plants are lush with extra petals in place of the parts of the flower needed for sexual reproduction and seed production, meaning double flowers – though beautiful – are mutants and usually sterile.

The genetic interruption that causes that mutation helped scientists in the 1990s pinpoint the genes responsible for normal development of sexual organs stamens and carpels in the plant Arabidopsis thaliana, long used as a plant model by biologists.

Now for the first time, scientists have proved the same class of genes is at work in a representative of a more ancient plant lineage, offering a glimpse further back into the evolutionary development of flowers.

“It’s pretty amazing that Arabidopsis and Thalictrum, the plant we studied, have genes that do the exact same kind of things in spite of the millions of years of evolution that separates the two species,” said Verónica Di Stilio, University of Washington associate professor of biology. She is the corresponding author of a paper published in the Proceedings of the National Academy of Sciences. 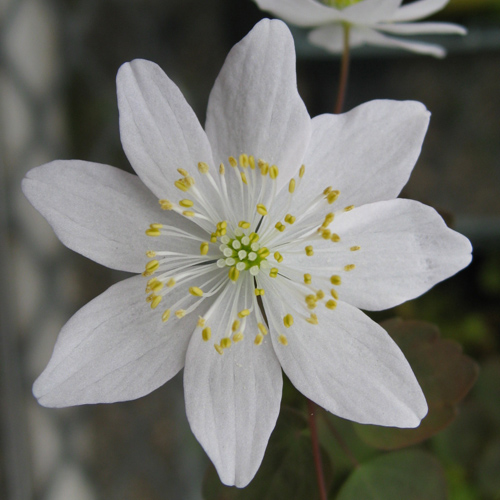 Wild-type Thalictrum used in the study have blossoms with stamens, carpels and other organs for sexual reproduction and seed making. Image credit: Di Stilio Lab/U of Washington

The function of these organ-identity genes appears to be highly conserved according to the new research, meaning the gene is essential and its function has been maintained despite the formation of new species.

Identifying the genetic and biochemical basis of double flowering in Thalictrum suggests the class of genes that likely underlie other widespread double-flower varieties, according to Kelsey Galimba, a UW doctoral student in the Di Stilio lab and lead author of the paper.

“Growers might be interested that we’ve figured out what’s going on genetically. In terms of applications, you could potentially trigger this if you were interested in creating double flowers because you know which gene to treat to get that flower form,” Di Stilio said.

Di Stilio’s group studied Thalictrum thalictroides. Known in the nursery trade as Anemonella thalictroides and rue anemone, the spring-flowering plant is native to the woods of Northeastern U.S. It belongs to the family Ranunculaceae, a sister lineage of the Eudicots. Eudicots today include 70 percent of all flowering species. 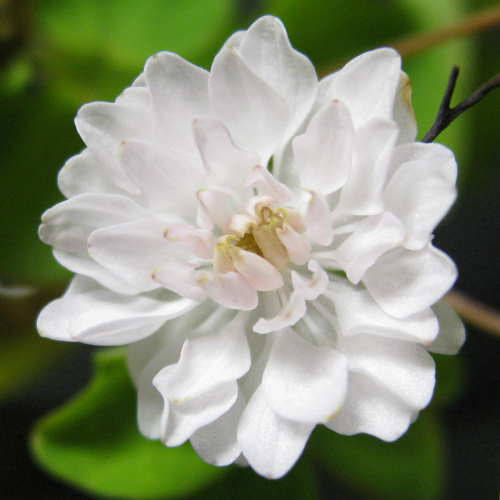 Petals replace stamens and other sexual reproduction organs in the double flower mutation of the Thalictrum cultivated under the name Double White in the nursery trade. Image credit: Di Stilio Lab/U of Washington

“The plants we’ve chosen to study possess ancestral floral traits and are sister to the core Eudicots that have model plants used by biologists such as Arabidopsis thaliana and Antirrhinum majus, or snapdragon,” Di Stilio said. “But the plants in our study belong to a more ancient lineage. We’re interested in evolution of flowers so we want to look at something that is a little bit different, that might inform us about how development has been tweaked over time to produce change.”

The scientists compared the class of genes that direct the development of certain sexual reproduction organs in wild-type Thalictrum with that of the cultivated double-flower version known as Double White. In the mutant, Galimba spotted part of a transposon, jumping genes that can move about the organism’s genome, sitting in the gene that affects development of reproductive organs. The protein produced by the mutant gene lacks some of the amino acids found in wild-type plants and the scientists hypothesize that it’s not the right length to interact with other proteins normally, Galimba said.

The researchers then did a second check on the findings by using a technique called viral induced gene silencing to knock down the properly functioning gene in a wild-type plant. The resulting blossom looked very similar to the Double White mutant. 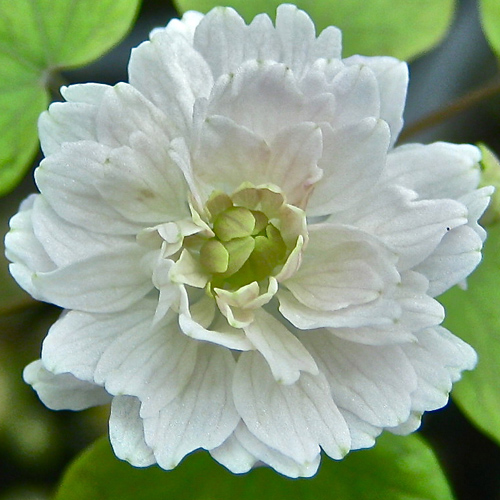 Researchers used a gene silencing technique to target and knock down a certain gene in the wild-type Thalictrum, with the resulting bloom looking very similar to the mutated double flower bloom. Image credit: Di Stilio Lab/U of Washington

“The flower is one of the key innovations of flowering plants. It allowed flowering plants to coevolve with pollinators – mainly insects, but other animals as well – and use those pollinators for reproduction,” Di Stilio said. “Many scientists are interested in finding the genetic underpinnings of flower diversification. Just how flowering plants become so species rich in such a relatively short period of geologic time has been a question since Darwin.” 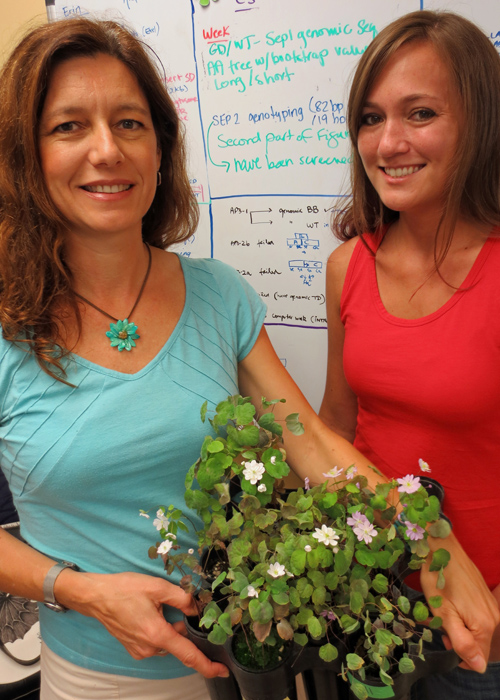 The work was funded by the National Science Foundation, including a research experience for undergraduate fellowship for co-author Theadora Tolkin, now a doctoral student at New York University. Other co-authors are Alessandra Sullivan, former Di Stilio lab member and current UW doctoral student; and collaborators Rainer Melzer and Günter Theiβen with Friedrich Schiller University in Germany.