Science is poised to take a “quantum leap” as more mysteries of how atoms behave and interact with each other are unlocked.

The field of quantum physics, with its complex mathematical equations for predicting the interactions and energy levels of atoms and electrons, already has made possible many technologies we rely on every day — from computers and smartphones, to lasers and magnetic resonance imaging. And experts say revolutionary advancements are destined to come.

But to take a giant leap, you have to be physically fit, and researchers at the University of Delaware have found an area of quantum physics that could use some more calisthenics, you might say. The research, performed by doctoral student Muhammed Shahbaz with his adviser, Prof. Krzysztof Szalewicz in the UD Department of Physics and Astronomy, was published recently in Physical Review Letters, the journal of the American Physical Society. 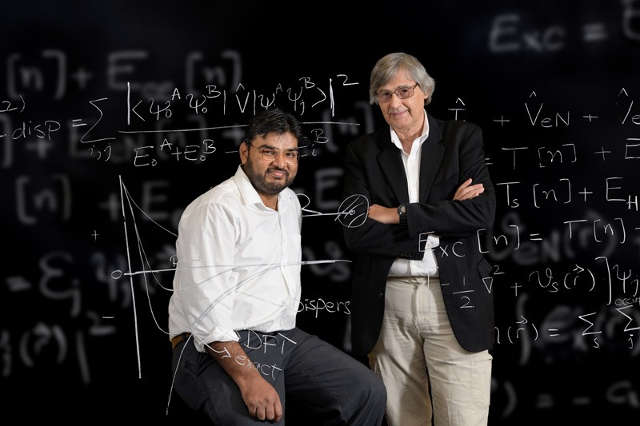 UD doctoral student Muhammed Shahbaz (left) and his adviser, Prof. Krzysztof Szalewicz, have shown that the “fudge factors” commonly used with a theory for predicting how atoms will interact are actually based on a faulty assumption. Photo by Evan Krape

Just like people, atoms can be attracted to each other, or, well, be repulsed. Take argon — the third most abundant gas in Earth’s atmosphere. This non-reactive gas has a variety of uses, from protecting historical documents to preventing the tungsten filament from corroding in fluorescent lights. When two argon atoms are far away from one another, they will be attracted to each other until they get down to about 3.5 angstroms and then they will repel each other. It’s as though once they’ve gotten a really good look at each other, they’re ready to move on.

But that’s not what physicists found about two decades ago when they tested the density-functional theory (DFT), which is now widely used to model and predict the electronic structure of atoms. Most versions of DFT were either predicting no attraction or only a very weak one. Where did the failure lie? The attraction between argon atoms originates from “dispersion interactions” between electrons, as the motions of the electrons of one atom influence the motions of the electrons of its partner. DFT can’t accurately account for these correlated motions at long range.

And that’s a problem, especially in a field like materials science, where physicists may design and predict the properties of a new material — from its strength to its magnetism to its ability to conduct heat — without ever going into a lab to do an experiment.

So physicists began developing “fudge factors” in the early 2000s to account for this dispersion energy. Some of these methods turned out to give reasonably good results and became an extremely popular tool in computational physics, chemistry and materials science. The scientific papers proposing such methods have been cited tens of thousands of times.

What Shahbaz and Szalewicz have shown, after more than a year of intense analyses, is that all of these fudged methods are actually based on a faulty assumption. DFT can describe how the motion of one electron both affects, and gets affected by, the motion of another electron when the distance between them is on the order of one angstrom. At separations above one angstrom to about seven angstroms, the correction methods assume that DFT recovers a fraction of these effects. Shahbaz and Szalewicz have found that this quantity does not have the characteristic properties of dispersion energy and actually originates from errors in the theory that are unrelated to dispersion. Thus, the researchers say, the correction methods may get good results, but for the wrong reasons.

“We are telling the physics community that you have to go further, toward a universal method of prediction that works for the right reasons,” Shahbaz says. “We are not here to criticize, but to help improve,” he humbly adds.

Currently, Szalewicz and Shahbaz are on a team of theorists and experimentalists from universities across the United States who are using quantum physics to predict the structures and energies of crystals, the stuff of which snowflakes, ice, most rocks and minerals, some plastics, pharmaceuticals, energetic material and other products are made. Their complex calculations  predict, for example, how much energy can be packed into a given volume of rocket fuel.

Shahbaz, who is the first author on the journal article, says he never would have guessed as a child in his small village in Pakistan that he would someday become a physics professor. He grew up helping his father, who is a farmer, grow reed, rice, chilis, tomatoes, eggplants, radishes and okra. Now he is the first in his family to be awarded a college diploma — not to mention academia’s highest degree, which is now in plain sight.

When he was applying to graduate school, he received offers from universities in the U.S. and Canada, but says he ultimately decided on UD because of the University’s reputation and the flexibility to work on a master’s degree first. He says that helped him decide what he really wanted to focus his research on.

When he completes his doctorate in the next few months, he already has a job lined up, as an assistant professor of physics at the University of the Punjab in Lahore, where he is destined to hook students on how light and gravity work, just as he was enthralled as a youngster.

“Physics tells you about the laws of nature,” Shahbaz says. “It also demands reasoning. You don’t have to memorize anything — just absorb life.”