That fruit fly joining you just moments after you poured that first glass of cabernet, has just used its poppy-seed-sized brain to conduct a finely-choreographed search, one that’s been described for the first time by researchers at the University of Washington.

The search mission is another example of fruit flies executing complex behaviors with very little “computational” power, their brains having 100,000 neurons compared to house flies with 300,000 neurons and humans with 100 billion.

Such computational efficiency is the envy of robot makers everywhere and of interest to neuroscientists wanting to know more about the brains of insects, animals and humans, according to Floris van Breugel, a UW post-doctoral researcher and lead author of a paper in the Feb. 3  issue of Current Biology. Michael Dickinson, UW professor of biology, is the paper’s co-author. 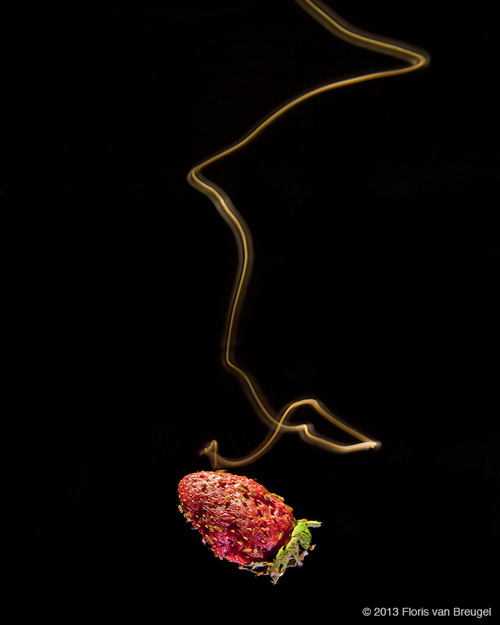 A long-exposure photograph reveals the last few seconds of a fruit fly’s search – surging forward when it has the scent and casting when it loses the odor, all the while looking for fruit-shaped objects. Image credit: Floris van Breugel

It’s the smell of fermentation that draws fruit flies, genus Drosophila, to your wine or the fruit ripening on the kitchen counter, the same smell that leads them to food in orchards and compost heaps outdoors.

If not already in your house when you pour your wine, fruit flies come calling from outside, following attractive odors through open doors and windows, being small enough to slip around the edges of screens if not simply passing through the openings in the mesh.

Fruit flies use their antennae to detect odors and it’s long been known they have a keen sense of smell. But odors travel in whiffs of scent, not steady streams, particularly outdoors in the wind. Nothing this detailed has ever been published about how free-flying fruit flies conduct successful searches, van Breugel said.

Using wind tunnel results, van Breugel and Dickinson described the reflexive surging upwind when an odor is detected and then the casting about when the whiff of scent is lost. 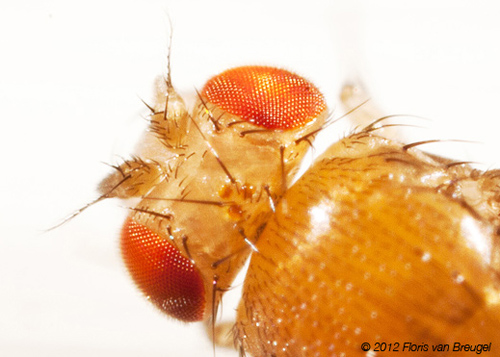 Fruit flies use their antennae, the two pill shaped bumps sticking out from the front of the head, to detect odors. Image credit: Floris van Breugel

One surprise – and another example of how efficiently fruit flies use their neurons – was that in the presence of attractive odors, flies began using their eyes to look for roundish objects that might be fruit, van Breugel said. Without an attractive odor, flies ignore such objects.

“Because an odor plume can be so chaotic, just tracking the plume may or may not get them to the source of the smell,” he said. “So that’s when visual exploration starts to take over. They start to explore objects with visual contrast that could be the source of the odor. They land and if it’s not something to eat, they continue the search.” A glass of wine would be a contrasting shape, like fruit, that would merit their attention. 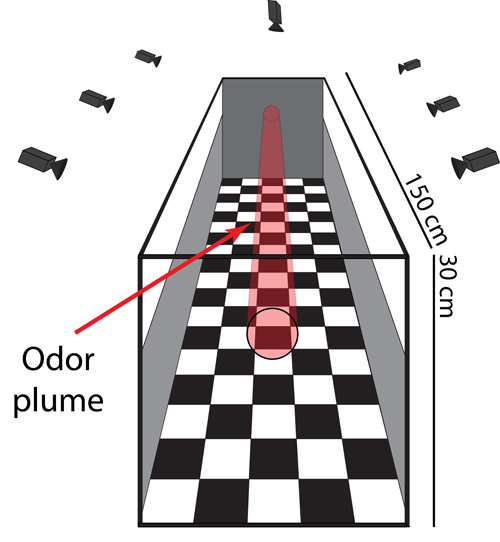 Flies, a dozen at a time, were observed trying to locate an attractive odor at one end of a 3-foot-long wind tunnel specially designed by Dickinson and his lab group. The tunnel generates a steady flow of air about the velocity of a light wind. Ten cameras collected more than 70 hours of flight data including 50,000 individual trajectories.

During the work, van Breugel wasn’t expecting to find evidence that flies would search for food visually. Then he noticed them exploring the floor of the wind tunnel, which had a checkerboard pattern, when odors were  present but not in their absence. He devised an experiment without the checkerboard, but with a round shape on the floor and each of two walls. When an attractive odor was present, fruit flies explored around and landed on those shapes.

“Their senses interact in very sophisticated ways so what they smell literally influences what they see,” Dickinson said. “These interactions between vision and olfaction is part of the secret of how flies do so much with such tiny brains, they have clever ways to combine information from different senses.”

A recording of the path taken by a fruit fly in a wind tunnel reveals a surge forward where the scent is strongest – red and orange being strongest, green and aqua less so – and casts when the scent becomes weaker and is lost – marked by dark blue arrows. Image credit: F van Breugel/U of Washington

Modeling how insect brains function could be useful in developing efficient robots, indeed one of the funders of the research is the U.S. Air Force Office of Scientific Research.

“The study of behavior has often been very subjective, but we’re at the point where we can collect data with enough richness and information that we can come up with quantitative interpretations of what’s happening,” van Breugel said. For example, van Breugel and Dickinson modeled the behavior of flies as a simple algorithm of three reflexes: surging, casting and attraction to small visual features. An algorithm is a set of rules that precisely defines a sequence of operations whether in a brain or in a computer.

Using a computer simulation, the authors showed that this simple three-step algorithm could reliably guide a fruit fly to food without the need for a long range plan or mental map.

“As we quantify more of their behaviors in such detail, we could discover more efficient and robust algorithms for controlling robotic systems of all kinds,” van Breugel said.

“Although finding fruit flies in your wine or beer can be a bit annoying, I hope people will pause to admire the tenacity of these clever little creatures,” Dickinson said. “They are really just hungry animals looking for something to eat, and have no intention of ruining your happy hour.”

While working on this project in the Dickinson lab, van Breugel earned his doctorate from California Institute of Technology.

Other funding for the work came from the National Science Foundation, the Paul G. Allen Family Foundation and the Hertz Foundation.