From the Man Who Played God, a Vampire and a Statesman: Don’t quit

Woolsey Hall was packed with his fans on Nov. 8 when Academy Award-winning actor Morgan Freeman took the stage for an “Actor’s Studio”-styled interview with Ron Gregg, a senior lecturer and programming director in Yale’s Film Studies Program.

Among those who came out to see the 74-year-old-actor — visiting the campus as a Chubb Fellow —was a 95-year old woman who listened as Freeman described his acting career and his history on television, in theater and in film. When given the opportunity to ask a question, she simply gushed, “Morgan Freeman, I love you. I’ve seen every movie you’ve been in.” She then told him, “I don’t want to show you any disrespect” for being so bold.

The audience applauded as a smiling Freeman responded, “If I ever grow up to be nearly as nice as you, I forgive you.”

The actor, responding to questions from Gregg and later from audience members, shared stories about his long acting career, from his early days playing Vincent the Vegetable Vampire on the PBS children’s show “The Electric Company” to his Broadway debut in the all-black version of “Hello Dolly!” in 1968 to his first award-winning role as Fast Black in the 1987 film “Street Smart,” which earned him an Academy Award nomination for best supporting actor and helped propel the Mississippi-born actor to fame. His other roles include Sergeant Major John Rawlins in “Glory,” Ned Logan in “Unforgiven,” God in “Bruce Almighty” and Lucious Fox in “The Dark Knight.” 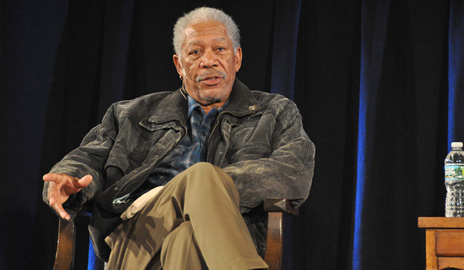 The road to success wasn’t entirely an easy one, Freeman pointed out. In fact, there were periods when he was extremely anxious to find work, including one in the early 1960s when he left Los Angeles and moved to New York, where he studied ballet and tap dance — and went from audition to audition in the hopes of landing a job.

“I didn’t expect it to be easy,” Freeman commented. “In down moments, when you got to the end of the ropes, there was always something or someone who came along and rejuvenated me.”

His love of acting, he revealed, began when he was just a child, acting on stage for the first time when he was eight.

“As I look back, I realize I was never meant to do anything else,” said Freeman of acting.

Nevertheless, Freeman related, he turned down a drama scholarship from Jackson State University to enlist in the U.S. Air Force.

“I wanted to fly planes and kill people,” Freeman commented. But then, while sitting in the nose of a plane, he says he realized that something was missing.

“No camera,” he said. “My epiphany was this: You don’t want to fly planes and kill people; you want to pretend. I knew it was all about acting.”

Nominated for Academy Awards for his leading roles in “Driving Miss Daisy” and “The Shawshank Redemption,” Freeman won the Best Supporting Actor award for his performance in “Million Dollar Baby,” in which he played a former boxer. He is the owner of his own film production company, and described how he tried unsuccessfully to get Nelson Mandela’s autobiography, “Long Walk to Freedom,” adapted into a film script. He eventually bought the film rights to a biography about Mandela and starred as the South African leader in the 2009 film “Invictus,” for which he was nominated for a third Academy Award for Best Actor.

Freeman recounted how he told Mandela that for him to play the role, he needed open access to the Nobel Peace Prize-winning statesman.

“[I told him] ‘I want to hold your hand, do everything but go to bed with you,’” Freeman said. He chose Clint Eastwood — who had directed him in a couple of other movies — to direct “Invictus.”

Freeman called Eastwood a “brilliant director,” and praised him for his ability to stand back and let actors make a scene their own.

“I don’t really like to be directed,” Freeman told his audience. “I am an actor, not a puppet. I really don’t want to be manipulated.”

Freeman was introduced to the audience by James Bundy, dean of the School of Drama and artistic director of the Yale Repertory Theatre, who said that the actor known for his deep, steady voice has also distinguished himself for his ability to “delve into the core of character and infuse it with quiet dignity.”

For his roles, Freeman said he doesn’t do research, but he reads the scripts and inhabits a character “intuitively.” He said that the best way to immerse himself in a role is to put on a piece of his character’s costume.

“When I put on a hat, it settles in who that person is,” Freeman said

Asked by a student member of the audience to share some advice for young people, Freeman offered this: “If you know what you want to be, the surest way to fail at it is to quit. If you want to do something, don’t quit. Stick with it.”