Researchers at Yale University have developed a new way of exposing the atomic attachments that keep complex molecules in precise alignment. The new method could provide insight into the mechanics of a variety of molecular structures, potentially aiding efforts to manipulate them for drug discovery and other purposes.

“The method appears likely to become a central tool for the characterization of processes that depend on supramolecular associations,” said Mark Johnson, a Yale chemistry professor and the principal investigator of the technique, which is described in a paper published this month in the journal Science. Supramolecular associations are interactions taking place between molecules, rather than within them.

Yale has filed a patent application for the technique, which Johnson’s team calls cryogenic infared spectroscopy.

At core, the new method involves freezing non-covalently-bonded molecules in isolation to generate a molecular-level snapshot of exactly how they attach to each other. These are molecules bonded by relatively weak forces compared with other types of molecular attachments. Commonly found in nature, examples include proteins and many other large molecules essential for biological processes. 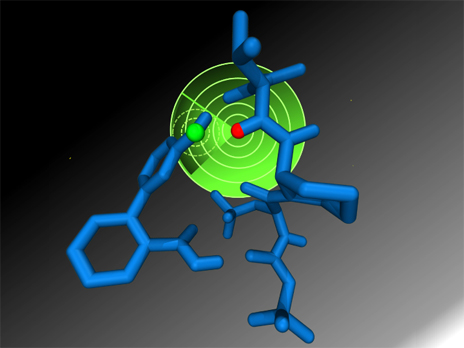 Researchers at Yale University have developed a new way of exposing the atomic attachments that keep complex molecules in precise alignment. The new method could provide insight into the mechanics of a variety of molecular structures, potentially aiding efforts to manipulate them for drug discovery and other purposes. Image credit: Yale University

The new technique could prove useful in drug development, as most drugs work through non-covalent interactions. The method would enable researchers to track how chemical changes to a drug molecule alter its binding behavior to host cells, for example. The method could also figure in future, non-invasive methods of identifying the presence of chemicals in airports and other contexts where detecting threats is important.

“In a very broad sense, since we couple mass spectometry and structural characterization, it can be very powerful,” said Etienne Garand, a postdoctoral student in Johnson’s lab who is the paper’s first author.

The new method has several advantages over existing methods of structural characterization of molecules, such as nuclear magnetic resonance (NMR), the researchers said. Perhaps most important, they note, the technique is highly sensitive: Less of a given compound is necessary in order to discern its structure.

“If you don’t have enough compound, then you can use our technique,” said Garand.

The technique can also provide details about highly energetic or reactive systems that often have very short lifetimes and are harder, or impossible, to capture by standard analytical techniques.

“A lot of time, when it’s not possible, for example, to use the NMR technique, people will use theory to get an idea of what’s going on,” said Garand.

Other authors are Michael Z. Kamrath, Peter A. Jordan, Arron B. Wolk, Christopher M. Leavitt and Scott J. Miller, all of Yale; and Anne B. McCoy of The Ohio State University.

The research was supported by the Air Force Office of Scientific Research, the National Science Foundation, the National Institutes of Health and Yale University.