Obesity is growing at alarming rates worldwide, and the biggest culprit is overeating. In a study of brain circuits that control hunger and satiety, Yale School of Medicine researchers have found that molecular mechanisms controlling free radicals-molecules tied to aging and tissue damage-are at the heart of increased appetite in diet-induced obesity.

Published Aug. 28 in the advanced online issue of Nature Medicine, the study found that elevating free radical levels in the hypothalamus directly or indirectly suppresses appetite in obese mice by activating satiety-promoting melanocortin neurons. Free radicals, however, are also thought to drive the aging process. 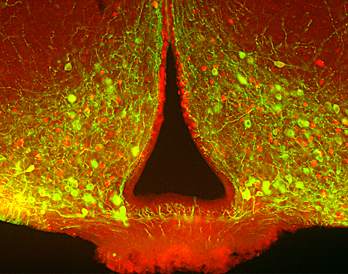 Satiety promoting melanocortin neurons (green) in the hypothalamus, some of which are activated (red nuclei) after treatment. Image credit: Yale University

“It’s a catch-22,” said senior author Tamas Horvath, the Jean and David W. Wallace Professor of Biomedical Research, chair of comparative medicine and director of the Yale Program on Integrative Cell Signaling and Neurobiology of Metabolism. “On one hand, you must have these critical signaling molecules to stop eating. On the other hand, if exposed to them chronically, free radicals damage cells and promote aging.”

“That’s why, in response to continuous overeating, a cellular mechanism kicks in to suppress the generation of these free radicals,” added lead author Sabrina Diano, associate professor of Ob/Gyn, neurobiology and comparative medicine. “While this free radical-suppressing mechanism-promoted by growth of intracellular organelles, called peroxisomes-protects the cells from damage, this same process will decrease the ability to feel full after eating.”

After the mice ate, the team saw that the neurons responsible for stopping overeating had high levels of free radicals. This process is driven by the hormone leptin and glucose, which signal the brain to modulate food intake. When mice eat, leptin and glucose levels go up, as does free radical levels. However, in mice with diet-induced obesity, these same neurons display impaired firing and activity (leptin resistance); in these mice, levels of free radicals were buffered by peroxisomes, preventing the activation of these neurons and thus the ability to feel sated after eating.

According to Horvath and Diano, the crucial role of free radicals in promoting satiety as well as degenerative processes associated with aging may explain why it has been difficult to develop successful therapeutic strategies for obesity without major side effects. Current studies address the question of whether, under any circumstance, satiety could be promoted without sustained elevation of free radicals in the brain and periphery.

The study was supported by grants form the National Institutes of Health and the American Diabetes Association.