ARMONK, N.Y. – 05 Apr 2012: To celebrate the history of math and its impact on the world, IBM has released Minds of Modern Mathematics, an iPad app that re-imagines a classic 50-foot infographic on the history of math created by husband-and-wife design team Charles and Ray Eames and displayed at the 1964 World’s Fair in New York City.

The app, which can be downloaded from the iPad App Store, is an interactive vintage-meets-digital experience for students, teachers, and tech fans that illustrates how mathematics has advanced art, science, music and architecture. It reinvents the massive timeline on the history of math from 1000 AD to 1960 that was part of Mathematica: A World of Numbers…and Beyond, IBM’s milestone World’s Fair exhibit.

Users can click through more than 500 biographies, milestones and images of artifacts culled from the Mathematica exhibit as well as a high-resolution image of the original timeline poster.

The app also includes the “IBM Mathematics Peep Show,” a series of playful, two-minute animated films by Charles and Ray Eames that offer lessons on mathematical concepts, from exponents to the way ancient Greeks measured the earth.

The app was developed by IBM together with the Eames Office — which works to preserve and extend the legacy of Charles and Ray Eames — and is debuting during the centennial year of Ray Eames’ birth. 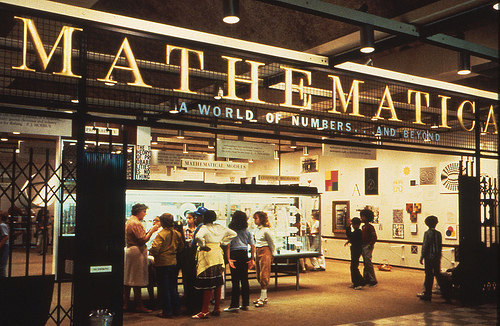 Mathematics remains essential to IBM’s technological innovation. As demand grows for real-time analysis of information gathered from sensors in roads and power grids and other sources of “big data,” IBM mathematicians are working on everything from the Jeopardy!-winning computer Watson, to astrophysics, weather forecasting and genomics, to using analytics to ease traffic congestion and power consumption in cities around the world.

IBM maintains the largest mathematics department in industry. The company expects the app to be used in classroom settings and beyond to spur interest in education and careers around STEM (science, technology, engineering and math).

“Careers of the future will rely heavily on creativity, critical thinking, problem solving and collaboration — all themes that were core to the ‘Minds of Modern Mathematics’ movement and remain equally relevant today,” said Chid Apte, IBM Director of Analytics Research and Mathematical Sciences. “What better way than a mobile app to reintroduce this timeless classic to inspire a new generation of learners?” 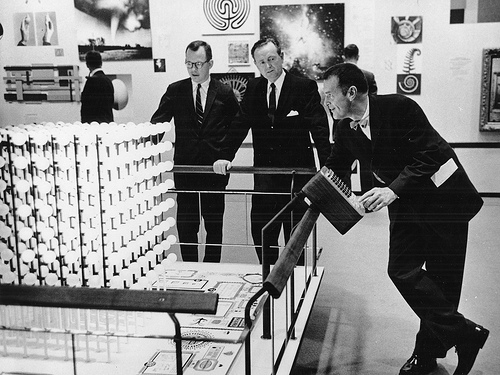 IBM's Minds of Modern Mathematics iPad app -- Charles Eames at Mathematica (1964). IBM's iPad app, Minds of Modern Mathematics, on the history of math, was inspired by the company's famed Mathematica exhibit at the 1964 World's Fair in New York City and the Los Angeles Museum of Science and Industry (now the California Science Center). Pictured is designer Charles Eames (right) at Mathematica, which he designed with wife Ray Eames. T2012 marks the centennial of Ray Eames' birth. Photo credit: IBM

Eames Demetrios, director of the Eames Office, said of his grandparents, “We’ve taken Charles and Ray’s original two-dimensional design and turned it into a compelling, interactive experience that anyone can enjoy. The original content, which has been transformed for the iPad, is still as hypnotic and engrossing as it was 50 years ago.”

From the earliest days of their collaboration, IBM and Charles and Ray Eames shared a commitment to popularize math and science and make them accessible for all. In 1961, IBM sponsored an exhibition at the California Museum of Science and Industry in Los Angeles, commissioning the Eameses to develop an interactive installation on mathematics. Called Mathematica: A World of Numbers…and Beyond, the 3,000 square foot installation inspired a generation to embrace science, math and technology. The popularity of the exhibit culminated in a replica being exhibited at the 1964 New York World’s Fair.

The large-scale mathematics timeline is still on display at the New York Hall of Science in Queens, NY, and the Museum of Science in Boston, Mass., and stands as an example of IBM’s and the Eames’ vision for interactive learning and design. A smaller, poster-sized version of the timeline is still displayed in classrooms and museums around the world. 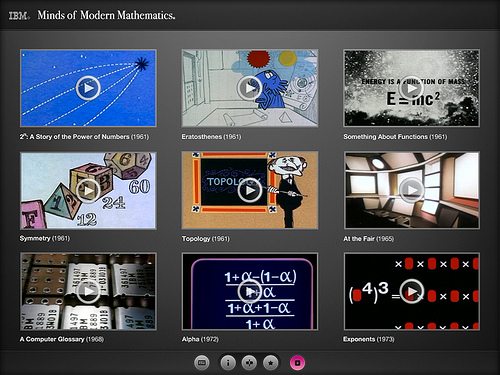 Go here for the free download of Minds of Modern Mathematic.

For more information about the app, visit https://mindsofmath.com.

For images of Mathematica, Charles and Ray Eames and the iPad app, visit Flickr.