Francis Galton’s eugenic novel Kantsaywhere has been published for the first time by UCL.

The novel, which is accompanied by a new introduction that considers its controversial literary and social context, was rejected for publication shortly before Galton’s death in 1911. Now, UCL has decided it to make it publicly available for the first time as part of a year of events commemorating the 100th anniversary of his death.

Francis Galton is often referred to as the ‘father of eugenics’, as he was the first to propose that human populations could be engineered to improve their genetic composition – an idea that has been highly contentious throughout the 20th century. In addition to coining the term ‘eugenics’, Galton was a polymath and scientist who, amongst other achievements, devised a system for forensic fingerprinting. 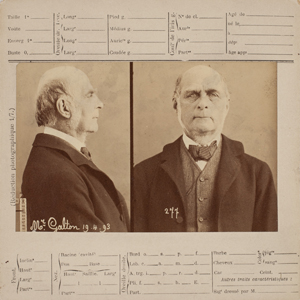 After his death, parts of Kantsaywhere were destroyed by Galton’s niece due to fears about the reaction to the love scenes, ideas of a ‘eugenic marriage’ and eugenics in general. The single copy that survived was passed to Galton’s biographer, Professor Karl Pearson, and later to UCL Special Collections.

Kantsaywhere details the struggles of a young man to fit into a eugenic utopia and marry the object of his affection, a Miss Allfancy. These struggles involve various physical and mental tests as well as checks on heredity and breeding so the fittest men and women continue to survive. It was written by Francis Galton as a popular way of getting ideas on eugenics across to a wider public.

In his introduction to the novel, writer and broadcaster Dr Matthew Sweet said: “Kantsaywhere has a plot that feels familiar, thanks to its echoes in twentieth-century science fiction such as Aldous Huxley’s Brave New World (1932) and John Wyndham’s The Chrysalids (1955).

“Despite the coyness of the title, Kantsaywhere is a country that may not be quite so alien as it first appears. Some version of its structures and processes are legible in the OFSTED report, in the psychometric test at the job interview, and on the internet dating site. You might also hear their echo in government statements on the wisdom of early intervention in the lives of children who have been judged statistically likely to develop into underachieving or socially disruptive adults.”

He concludes: “Whether we welcome such ideas as a form of good works, or reject them as a form of soft authoritarianism, their instances in the past may help us decide their fate in the future. Kantsaywhere might form part of that debate. Certainly, averting our gaze from Francis Galton’s extraordinary body of work will not assist us in reaching the right conclusions.”

There are a series of events at UCL this year celebrating Galton’s centenary, including two exhibitions: An Enquiring Mind: Francis Galton 1822-1911 at the UCL Main Library, and Typecast: Flinders Petrie and Francis Galton at the UCL Petrie Museum of Egyptology

Kantsaywhere, including a new introduction by Dr Matthew Sweet