A new study provides a composite picture of the environmental distribution of oil and gas from the 2010 Deepwater Horizon spill in the Gulf of Mexico. It amasses a vast collection of available atmospheric, surface and subsurface chemical data to assemble a “mass balance” of how much oil and gas was released, where it went and the chemical makeup of the compounds that remained in the air, on the surface, and in the deep water.

The lead author, NOAA research chemist Thomas Ryerson, assembled an all-star team of 14 scientists from diverse backgrounds and organizations including academia, private research institutions and federal labs, all of whom played important roles collecting and analyzing data during the spill. Four scientists from the Woods Hole Oceanographic Institution (WHOI) were integral to the paper: environmental engineer Richard Camilli, and marine chemists Elizabeth Kujawinski, Christopher Reddy, and Jeffrey Seewald. The other nine authors hailed from Texas A&M University, the University of California at Santa Barbara and at Irvine, the University of Miami, and the University of Colorado. 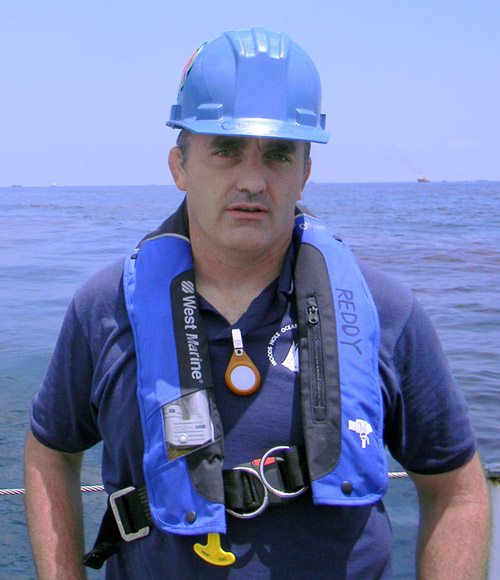 WHOI marine chemist Chris Reddy is an oil spill expert who has worked on oil spills around the world. He was part of a team from WHOI that collected samples in the Gulf of Mexico using not only CTDs but the AUV Sentry enabled with the TETHYS mass spectrometer, and later analyzed many of the samples in his lab. (Photo by Ben Van Mooy, Woods Hole Oceanographic Institution)

“This paper is exciting for several reasons,” said Reddy, a WHOI senior scientist who specializes in oil spills.  “This is a study based on data from the Gulf and not on models, and it tells the big picture of this spill just 18 months after the leak was capped – a remarkably short amount of time.” Reddy further emphasized the importance of the array of scientists Ryerson assembled to help tell this story. “He brought together key players to analyze relatively new data that came from an impressive array of sampling techniques.” 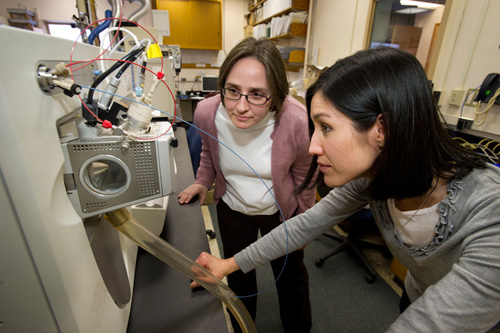 WHOI marine chemist Elizabeth Kujawinski (left) and research associate Melissa Kido Soule monitor a mass spectrometer that can detect and identify molecules in low concentrations within a mixture of compounds. Kujawinski and her colleagues used finely-tuned analytical instruments and techniques to track minute amounts of oil and gas components from water samples taken in the Gulf of Mexico after the Deepwater Horizon oil spill (Photo by Tom Kleindinst, Woods Hole Oceanographic Institution)

In addition to hydrocarbon data Ryerson collected from overflights on NOAA P-3 planes and other air samples from research vessels, the paper incorporates data collected by a remotely operated vehicle (ROV) using a unique device developed by Seewald to sample the leaking fluid at the well, as well as data from the WHOI–designed and -built autonomous underwater vehicle Sentry outfitted with a miniaturized mass spectrometer developed by Camilli. Additionally, it uses many water samples from various depths taken and analyzed by Reddy, Camilli, Kujawinski, and others, using finely-tuned analytical instruments and techniques to track minute amounts of the oil and gas components. 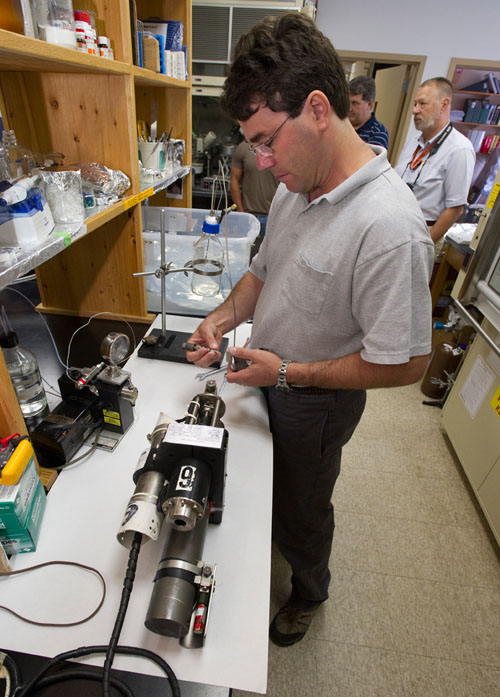 WHOI Marine Chemist Jeff Seewald developed a isobaric gas-tight sampler for use at hydrothermal vent sites, but the device was critical in obtaining a sample of the fluid leaking from the Macondo well during the 2010 Deepwater Horizon spill. To capture the fluid, a team of scientists used a remotely operated vehicle to position the sampler into the well. (Photo by Tom Kleindinst, Woods Hole Oceanographic Institution)

When combined, the data tell a story about the fate of the oil and gas in the air, on the surface and in the ocean and enabled a new chemistry-based spill rate estimate of an average of 11,130 tons of gas and oil compounds per day – close to the official average leak rate estimate of about 11,350 tons of gas and oil per day (equal to about 59,200 barrels of liquid oil per day). In total, approximately 4.2 million barrels of oil were released from the well. 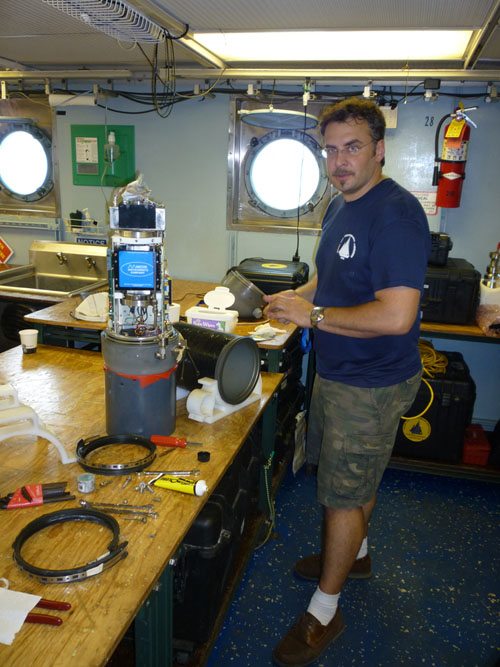 WHOI Environmental Engineer Rich Camilli working on TETHYS, the miniaturized mass spectrometer he developed. During the Deepwater Horizon spill, TETHYS was integrated into the AUV Sentry and used to define and characterize the deepsea plume. (Photo by Cameron McIntyre, Woods Hole Oceanographic Institution)

Ryerson and his colleagues determined that the visible surface slick represented about 15 percent of the total leaked gas and oil; the airborne plume accounted for about another 7 percent. About 36 percent remained in an underwater plume of droplets about 3,300-4,300 feet below the surface, and 17 percent was recovered directly at the surface through a marine riser. The location of the balance, about 25 percent of the total, is not directly accounted for by the chemical data. 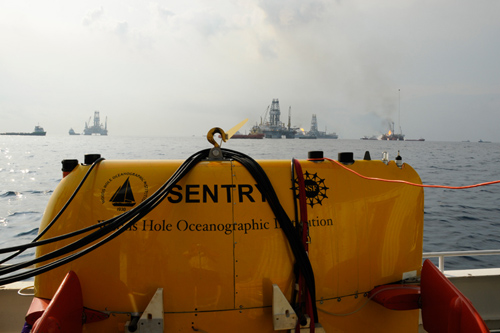 In June 2010, a WHOI-led team used the autonomous underwater vehicle Sentry in the Gulf of Mexico to define and characterize the deepsea hydrocarbon plume from the Deepwater Horizon spill. Sentry, equipped with a miniaturized mass spectrometer called TETHYS, was able to crisscross plume boundaries 19 times to help determine the trapped plume’s size, shape, and composition. (Photo by Chris Reddy, Woods Hole Oceanographic Institution)

The chemical composition of oil and gas in each of these locations was very different. The underwater plume was enhanced in gases known to dissolve readily in water, the team found. This included essentially all of the lightweight methane (natural gas) and benzene present in the spilling reservoir fluid. The surface oil slick was dominated by the heaviest and stickiest components, which neither dissolved in seawater nor evaporated into the air. And the airborne plume of chemicals contained a wide mixture of intermediate-weight components of the spilled gas and oil. 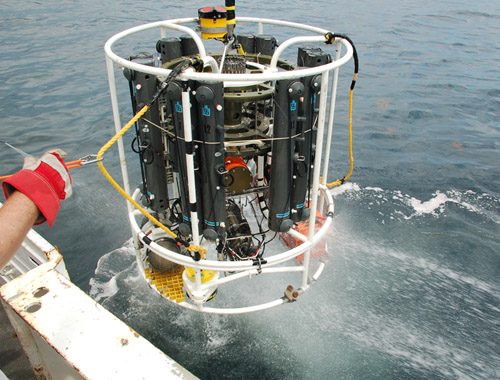 A new NOAA-led study on the environmental distribution of gas and oil from the Deepwater Horizon spill relies on data from a wide range of sources including many water samples taken from various ocean depths using CTDs, a standard oceanographic instrument. Scientists from diverse backgrounds and organizations including academia, private research institutions and federal labs contributed to the study, which provides a composite picture of the fate of the oil. (Photo by Dan Torres, Woods Hole Oceanographic Institution )

“The results shed a brighter light on the fate and behavior of the oil,” said Reddy, “and may help to prepare for future spills.”