When paleontologists at the University of Washington cut into the fossilized jaw of a distant mammal relative, they got more than they bargained for — more teeth, to be specific.

As they report in a letter published Dec. 8 in the Journal of the American Medical Association Oncology, the team discovered evidence that the extinct species harbored a benign tumor made up of miniature, tooth-like structures. Known as a compound odontoma, this type of tumor is common to mammals today. But this animal lived 255 million years ago, before mammals even existed.

“We think this is by far the oldest known instance of a compound odontoma,” said senior author Christian Sidor, a UW professor of biology and curator of vertebrate paleontology at the Burke Museum of Natural History and Culture. “It would indicate that this is an ancient type of tumor.”

Before this discovery, the earliest known evidence of odontomas came from Ice Age-era fossils.

“Until now, the earliest known occurrence of this tumor was about one million years ago, in fossil mammals,” said Judy Skog, program director in the National Science Foundation‘s Division of Earth Sciences, which funded the research.  “These researchers have found an example in the ancestors of mammals that lived 255 million years ago. The discovery suggests that the suspected cause of an odontoma isn’t tied solely to traits in modern species, as had been thought.” 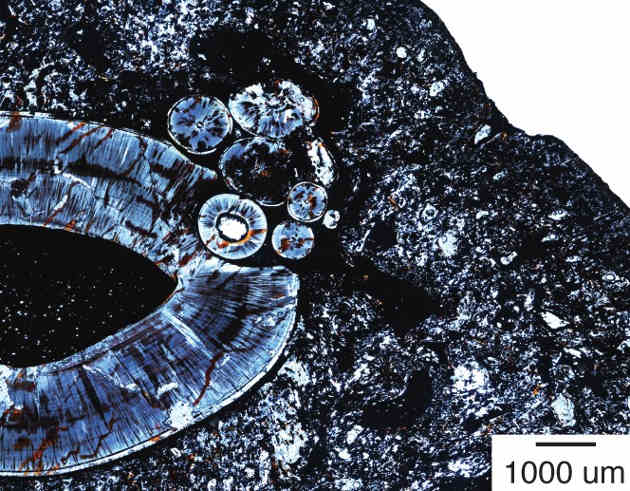 A histological thin section of the gorgonopsid lower jaw, taken near the top of the canine root. The dark area on the right is bone. The backward C-shaped structure on the left is the canine root. The cluster of small circles resemble miniature teeth, indicative of compound odontoma. Image credit: Megan Whitney/Christian Sidor/University of Washington

In humans and other mammals, a compound odontoma is a mass of small “toothlets” amalgamated together along with tooth tissues like dentin and enamel. They grow within the gums or other soft tissues of the jaw and can cause pain and swelling, as well as disrupt the position of teeth and other tissues. Since odontomas do not metastasize and spread throughout the body, they are considered benign tumors. But given the disruptions they cause, surgeons often opt to remove them.

Surgery was not an option for the creature studied by Sidor’s team. It was a gorgonopsian, a distant mammal relative and the apex predator during its pre-dinosaur era about 255 million years ago. Gorgonopsians are part of a larger group of animals called synapsids, which includes modern mammals as its only living member. Synapsids are sometimes called “mammal-like reptiles” because extinct synapsids possess some, but not all, of the features of mammals. The first mammals evolved over 100 million years ago.

“Most synapsids are extinct, and we — that is, mammals — are their only living descendants,” said Megan Whitney, lead author and UW biology graduate student. “To understand when and how our mammalian features evolved, we have to study fossils of synapsids like the gorgonopsians.”

Paleontologists have categorized many “mammal-like” features of gorgonopsians. For example, like us, they have teeth differentiated for specialized purposes. But Whitney started studying gorgonopsian teeth to see if they had another mammalian feature.

“Most reptiles alive today fuse their teeth directly to the jawbone,” said Whitney. “But mammals do not: We use tough, but flexible, string-like tissues to hold teeth in their sockets. And I wanted to know if the same was true for gorgonopsians.”

A purely external examination of gorgonopsian fossils wouldn’t answer this question. Whitney had to take the risky and controversial approach of slicing into a fossilized gorgonopsian jaw: looking at thin sections of jaw and tooth under a microscope to see how the tooth was nestled within its socket. Since this technique would damage the fossil, Whitney and Larry Mose, a UW undergraduate student working with her, used a solitary or “orphan” gorgonopsian lower jaw that Sidor had collected in southern Tanzania.

Mose prepared multiple thin slices from the gorgonopsian jaw — each only about as thick as a sheet of notebook paper — and mounted them onto slides. He and Whitney immediately noticed something unexpected within the jaw: embedded next to the root of the canine were irregular clusters of up to eight tiny, round objects.

At higher magnification under a microscope, Whitney discovered that the objects within each cluster resembled small, poorly differentiated teeth, or toothlets. The toothlets even harbored distinct layers of dentin and enamel.

“At first we didn’t know what to make of it,” said Whitney. “But after some investigation we realized this gorgonopsian had what looks like a textbook compound odontoma.”

At 255 million years, this is by far the oldest reported evidence for an odontoma — and possibly the first case in a non-mammal. According to Sidor, odontomas have been reported in archaeological specimens, as well as fossilized mammoths and deer. But those cases all date to within the last million years or so. Since this synapsid had an odontoma, it would indicate that this mammalian condition existed well before the first mammals had evolved.

“This discovery demonstrates how the fossil record can tell us a lot about our present-day lives — even the diseases or pathologies that are part of our mammalian heritage,” said Sidor. “And you could never tell that this creature had it from the outside.”

The research was funded by the National Science Foundation and a University of Washington Mary Gates Research Fellowship.