Peter Seid and Phu Nguyen invented smartphone-controlled robots that can learn from their environment and interact with people. Their company, Romotive, is based in Las Vegas.

Ever dreamed of having a robot in your home that you can interact with, talk to and even send on errands? If you have, then your dream is coming true, because two former University of Arizona students have invented just such a robot.

Phu Nguyen and Peter Seid were friends from high school in Phoenix before coming to the UA to launch college careers that neither of them expected would lead to starting their own Las Vegas-based company selling robots and backed by some of the world’s top entrepreneurs. 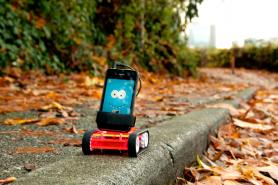 With Romo's live-stream video, people can see, talk to and interact with others, and even take a walk, without leaving their living rooms. "You can be in two places at once," said Romo inventor Peter Seid. Romo also can roam free, able to learn from its environment and respond to stimuli independently. (Photo courtesy of Peter Seid and Phu Nguyen)

“It all started one day when I called up Peter,” said Nguyen, who graduated from the UA in 2008 with a degree in economics. “I said, ‘Wouldn’t it be cool if you could control a robot from your smartphone?'”

“Peter took that idea and ran with it for about a week,” Nguyen said, “and then came back with a prototype robot.”

Affectionately named “Romo,” the robot can be controlled by a smartphone remotely over the Internet from anywhere in the world. With the ability to interact with its environment and respond to stimuli, Romo also can roam free, said Nguyen: “There doesn’t have to be a person controlling its every move.”

The robot is capable of going places humans can’t, allowing its human controller to explore small spaces he or she otherwise would never see, said Seid, who studied mechanical engineering at the UA. Seid took a class by Elmer Grubbs of the UA department of electrical and computer engineering to help him learn how to build the circuit boards for the first few robot prototypes.

A smartphone is powerful enough to control the “brains” of a robot, said Nguyen, and smartphone applications, or apps, can extend the robot’s functionality.

One new app allows the robot to stream video to another smart device such as a computer, another smartphone or an iPad. “It’s a real tele-presence robot,” said Nguyen. “You can send someone a link that allows them to control the robot over Internet from anywhere in the world.”

For example, a grandmother can see, talk to and interact with her grandkids in another place by controlling Romo, said Nguyen, “as if she was there, interacting with her family.”

Seid and Nguyen didn’t stop at inventing the lifelong dream of many in a matter of weeks. 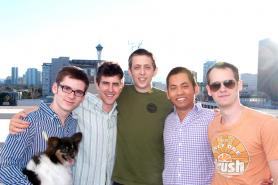 With their new robot, the young entrepreneurs decided to reach for the stars: They submitted an application to TechStars, a startup accelerator that provides funding to new companies from top venture capital firms and independent investors, as well as three months of intensive mentorship by leading entrepreneurs.

TechStars accepts only 1 percent of applicants each year, and Seid and Nguyen were among the winners. They moved to TechStar’s Seattle location in July, and with the support provided by the TechStars program, started their own company to get Romo out into the world: Romotive.

Now with chief executive officer Keller Rinaudo and investors including Standford University, Tony Hsieh, David Cohen, David Tisch, Lerer Ventures and PivotNorth Capital, Romotive is based in Las Vegas, where Seid and Nguyen moved after completing the TechStars program to work with their primary investor, Tony Hsieh, in his efforts to transform downtown Las Vegas from a gambling scene to a community-focused technology hub.

“It’s his vision to attract young people here to create ventures that are more sustainable for the future of downtown Las Vegas,” said Nguyen. “We’re one of the first companies to come out here. It’s exciting to be part of something new.”

Initially the robots were built by Seid, who frequently stayed up into the wee hours of the morning to finish robots. Now, Romotive has a dedicated team of robot builders, including four former Wildcats, which ships out about 75 robots each day to eager new Romo owners.

Romo has been particularly popular among hobbyists, who often order the robot in a disassembled kit and put it together themselves, said Seid.

“Peter’s engineered the robot in such a way that it can be assembled relatively quickly,” said Nguyen. “We’ve had 9-year-old girls assemble and disassemble a robot in 26 minutes with no help or instructions.”

“Kids go crazy for the robots,” said Nguyen. “Kids are our best beta testers because they sprout off the first idea that comes into their heads. They don’t have any inhibitions about telling us new ideas.”

For the smiling smartphone on wheels, education is a primary mission, said Seid: “We think it will be a really good way for kids and adults to learn the basics of programming.”

“One of our main goals is to democratize robotics so that you don’t have to be a roboticist to really create cool things for robots,” said Nguyen. “Any 13-year-old kid could develop and write a very compelling program for a robot.”

Apps for Romo are free, and while the Romotive team always is developing new apps to give Romo new abilities, individuals can develop their own apps as well.

“There’s this big gap in robotics between the low cost, low-functioning toys that you can buy at most toy stores and the really advanced research robots that you can find in places such as MIT media labs,” said Nguyen.

Romotive is working with the Menlo Park, Calif., company Willow Garage to lessen that gap and make the tools necessary for advanced robotics more readily available to software developers and for people who just want to play with robots.

“We make our robots out of materials that are durable. We realize that they’re going to be really popular with pets and kids and that combination sometimes leads to unexpected incidents,” said Nguyen.

Small yet mighty, Romo is built to last.