Female Butterflies Learn When It Comes To Wings, Flashier is Better in A Mate

If female butterflies are programmed to identify males of their species by the patterns of spots on their wings, how can new wing patterns evolve in males?

The answer is that while females are predisposed to prefer a specific pattern, they learn to like flashier ones more, according to a new Yale University study.

The study published online the week of June 11 in the Proceedings of the National Academy of Sciences gives a partial explanation of an evolutionary mystery.

Biologists used to think that preference for certain traits such as wing spots are hardwired into insects. But that left scientists wondering how butterflies managed to evolve such great diversity in their wing coloration. 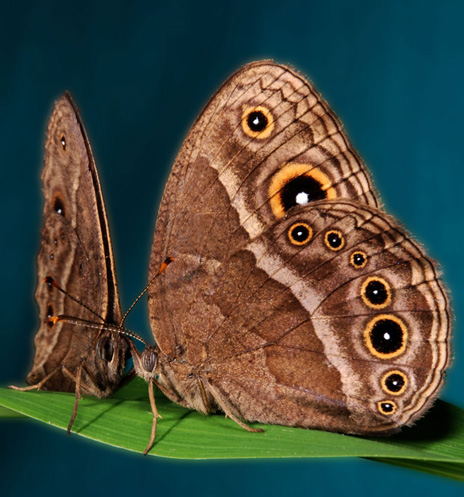 Yale scientists have discovered that female butterflies can be taught to prefer mates with more spots on their wings. (Image created by William Piel and Antónia Monteiro)

The Yale team studied the butterfly species Bicyclus anynana, which in the wild has two spots on its forewings (the tops of the wings). The researchers found that female butterflies of the species learn to prefer males with four spots on their forewings over those with two spots.

“What surprised us was that females learn this preference after being in the presence of males for just a very short period of time,” said Erica L. Westerman of Yale’s Department of Evolutionary Biology and Ecology (EEB) and lead author “The male did not have to court them or engage in flashy behavior.”

While other studies have found that invertebrates can learn new preferences, the Yale researchers were surprised to find that an insect species like the butterfly actually can learn to favor some wing patterns more than others.

When exposed to butterflies with four brilliant ultraviolet-reflecting spots for only three hours, females no longer show preference for the type of males found in the wild. But females initially exposed to drabber males with one or zero spots did not change their original preferences.

“There is a bias in what females learn, and they learn extra ornamentation is better,” said Antónia Monteiro, EEB professor and senior author of the paper. 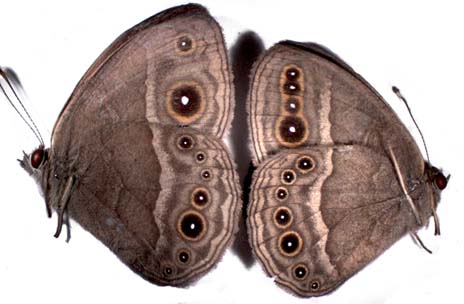 The male Bicyclus anaynana found in the wild has two eyespots on its forewings (left), while the Spotty type has four. Image credit: Yale University

“What we have found is a previously unexplored mechanism for biasing the evolution of morphological diversity,” Westerman said. “We are now investigating what other cues are being evaluated during the learning period and what prevents females from mating with members of other species.”

Study was funded by the National Science Foundation and Yale.

Yale’s Andrea Hodgins-Davis and April Dinwiddie were co-authors of the paper.