For student musicians at Brown, vibrant interest in music production makes for a perfect mix

PROVIDENCE, R.I. [Brown University] — Chance Emerson had been at Brown for barely two weeks when he learned firsthand the power of the perfect sound mix.

The first-year student arrived on campus last fall with an EP under his belt, close to one million Spotify streams, and 10 new songs written, recorded and ready to become his first full-length album.

On the suggestion of a mutual friend, he invited Palmer Nix, a sophomore concentrating in music and philosophy, to give the new tracks a listen. As a studio technician for Brown’s music department who had just spent the summer working alongside Alicia Keys’ head audio engineer, Nix had been developing an ear — and a reputation — for sound mixing, the art of electronically fine-tuning the frequencies of the many aural threads that together make a single recorded track. 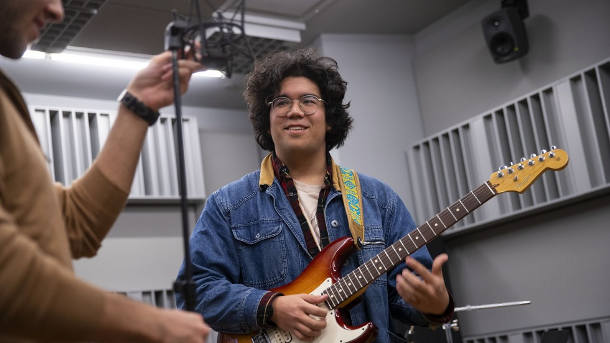 Chance Emerson, Class of 2023, plays guitar in the Recording Studio at the Granoff Center for the Arts. Photo credit: Nick Dentamaro

Nix invited Emerson to Brown’s Steinert Practice Center studios where, after listening to Emerson’s tracks, Nix made an offer. “He said, ‘These are really cool, man, and I think I can make them even better,’” Emerson said. “Then we began looking at the digital files together and I asked him if he’d like to try mixing them with me, using the Brown studios as space to make them cleaner and better.”

Nix agreed, and, during countless hours in the Steinert and Granoff Center studios this fall, the two refined Emerson’s 10 original tracks into “The Raspberry Men,” a full-length album that debuted on Friday, March 6. Its nine songs sound, Emerson said, like the best versions of themselves.

“Everything sounds more polished, clean and precise — it just cuts through now,” Emerson said. “That’s the work we were doing — sculpting the final shape of the sound and removing anything that didn’t add to a song’s purpose.”

Nix added, “I always compare mixing to making an animated film. At the start of the mixing process, the stick figures are already walking across the 2D hill. Then the mixer comes and adds the blades of grass and the folds in their clothes. They fill everything out.”

Before he and Emerson finalized the mix, Nix invited James Moses, a professional sound engineer who teaches a Brown music department seminar called Advanced Studio Techniques, to the studio, where he lent his ears to the pair’s work.

“Professor Moses has years of real-world experience as a sound designer,” Emerson said. “He knows what he’s looking for — well-mixed tracks that pop… His feedback gave Palmer and me the boost of confidence we needed to say, ‘It’s ready.’”

For Moses, who regularly advises Brown students embarking upon capstone projects in music, working with Emerson and Nix was a natural extension of his advising work.

“When you get to look at a person’s work closely and individually, you get to discuss more precise concepts than you can in a class,” he said. “It’s a great way to learn. And it’s a fun way to teach.”

Emerson credits the collaborative spirit within the music department at Brown with helping make his new album possible. “The community here is so conducive to collaboration,” he said. “For Palmer to dedicate so much time to this album, and for him to be able to just ask Professor Moses to come listen to the full album — and for him to be excited to do that — those are things that wouldn’t happen everywhere.”

“There’s a vibrant interest in musical production here at Brown,” Moses added. “I think this collaboration is characteristic of that.”

At the same time, Emerson and Nix said, making music at Brown is also enriched by the freedom they have to explore other interests.

“Part of why I chose Brown rather than a traditional music school was the Open Curriculum,” Nix said. “I love music, but I’ve also always been passionate about philosophy and biology, and my other passions and interests inform the music I write.”

Emerson — who is exploring a combination of STEM fields that include engineering and astrophysics — agreed:

“My music is about my life. And the more experience you get to have, the wider the range of pieces you can create. The more you explore, the more you can make.”